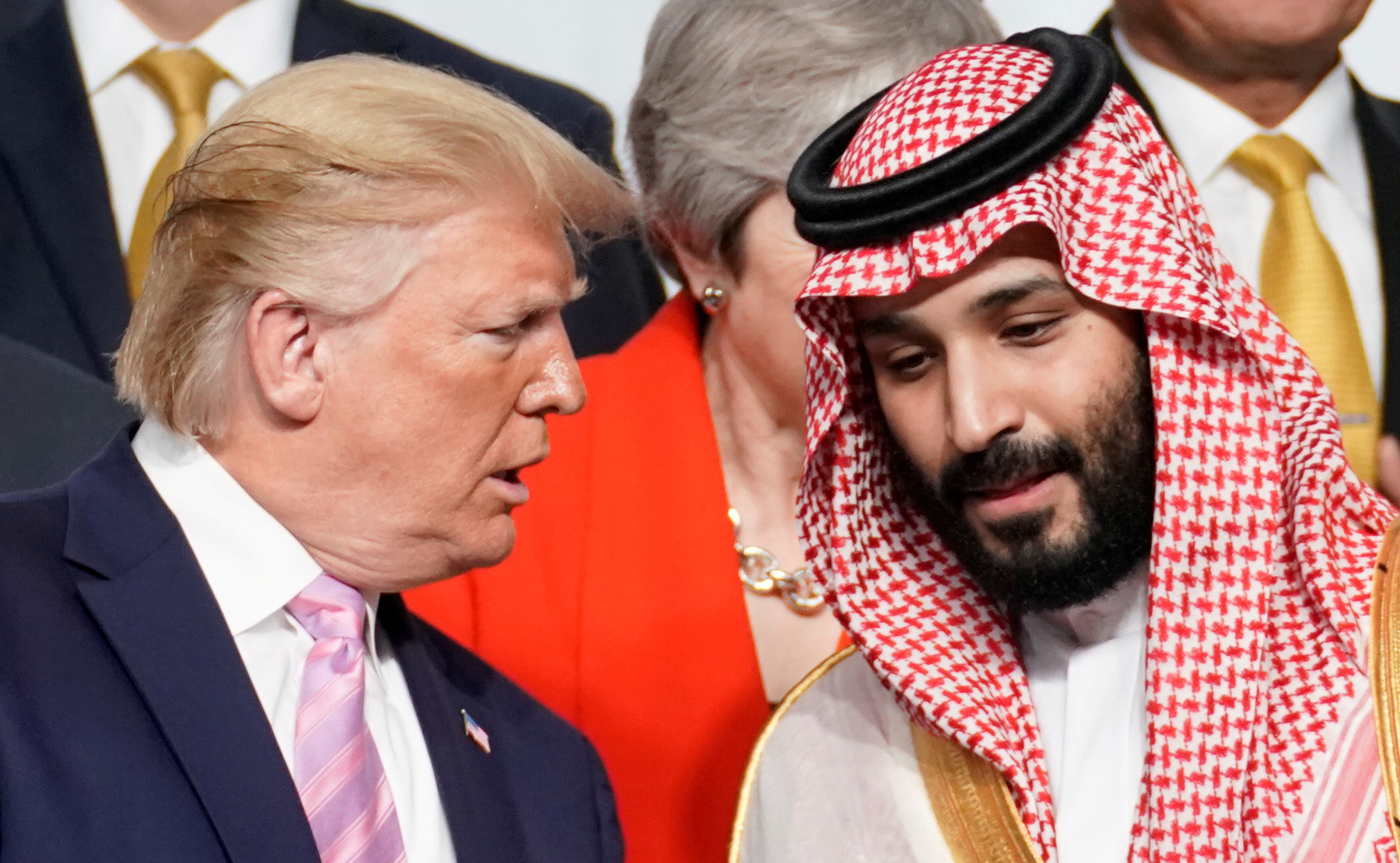 I have been following this relationship since 1977 when I joined the CIA. It has had marked ups and downs. Some of the ups have been extremely high, like 1991, the Gulf War, and some of the lows have been extraordinarily low, the 1973 oil embargo and, of course, 19 years ago today, the attack on September 11. But we are in a fundamentally different and new relationship with Saudi Arabia today than anything I have seen in the last 75 years. Saudi Arabia today, under King Salman and his son, Mohammed bin Salman, MBS, the crown prince, has embarked on a series of foreign policies which are reckless and dangerous and, most important, are inimical to America’s vital interests in the Middle East and in the world.

Mohammed bin Salman is very much the driving force on these policies. He is one of the ultimate micromanagers of any policy. He needs it boiled down to the smallest details. I think that tells us a lot about Jamal Khashoggi’s death. But the king is also particularly important in this whole process. King Salman provides legitimacy, and he is like air cover for the crown prince’s activities.

The Kingdom of Saudi Arabia has traditionally, for decades, been a very cautious, risk-averse country. It prefers to throw money at problems, not military resources. It prefers to deal behind the scenes, not out in public. This has all changed dramatically in the last 5-plus years under Mohammed bin Salman. The kingdom has now become unpredictable, erratic, and as I said earlier, reckless, and dangerous.

I am going to briefly focus on three policy areas very quickly that just illustrate the point. By far the most important is the war in Yemen. The war in Yemen is today the world’s biggest humanitarian catastrophe without a doubt. Thousands, tens of thousands of Yemeni children are suffering, and many of them will not survive.

Instead of becoming a quick, decisive storm, as MBS called it in the beginning, it has turned into a quagmire which is costing the kingdom of Saudi Arabia a fortune. Instead of ousting a pro-Iranian militia, the Zaidi Shia Houthis, from the capital Sana’a and other cities, the war has given Iran a base on the Red Sea and on the Bab-el-Mandeb. And Iran has paid a pittance for these advances. The contrast between Saudi spending and Iranian spending in Yemen could not be more dramatic. Instead of Iran being under siege in this war, it is Saudi cities, Saudi oil infrastructure that is regularly attacked by the Houthis and, on one occasion, by the Iranians directly with cruise missiles and drones. It is really a remarkable situation to see Saudi Arabia in this place.

Today the kingdom has finally, I think belatedly, realized its mistake and very much wants to end the war. They have asked for two cease-fires, but they are not withdrawing their troops from Yemeni territory, and they have not given up their backing for the forces of Yemeni President Hadi. The Zaidi Shia rebels, on the other hand, seem in no hurry in the war. It is increasingly clear that the Zaidi Shias think they are winning the war and that they are on the verge of complete victory.

This war is entirely a creation of MBS. He rushed into it about five years ago in close to a panic with no end game in sight, with no strategy for achieving an end game, and without critical allies, most importantly, the Pakistanis and the Omanis, the countries with the most influence in how to bring this conflict to an end. He is now desperate to find scapegoats for his mistake. He knows that there are significant elements in the royal family who blame him for this quagmire. And he just fired the commander of Saudi forces in Yemen under the auspices of an anti-corruption bribe.

The other Arab partners that the Saudis had at the beginning of the war, most notably the Emiratis, but also the Jordanians, the Bahrainis and others, have all now left the battlefield. They have essentially abandoned the war and the Emiratis have continued some residual influence, but they are much less involved than they were earlier.

Only the United States of America, and to a lesser extent the United Kingdom, continue to provide the kind of support that allows this war to go on. And it is vital that we do something about that. The war has left us associated with a humanitarian catastrophe and with the results of that catastrophe. It has found us in a position where we are an ally of Saudi Arabia in a murderous campaign against the poorest country in the Arab world. The United States should take immediate steps to cease all support for the war.

I would recommend withdrawing the bulk or all the American troops inside Saudi Arabia today, cutting back on training programs, no new arms sales, but even more importantly, disrupting the logistics chains for the ongoing arms sales. The United States provides about two-thirds of the aircraft in the Royal Saudi Air Force, the United Kingdom provides the other third. Literally, if we and the United Kingdom cut off logistic support, the Royal Saudi Air Force would be grounded. That is how much influence we have. That is how much responsibility we have.

The second issue that I would just mention a little more briefly is the siege of Qatar which started in 2017. Saudi Arabia and the Emiratis and the Bahrainis announced that they were cutting off all communications, all diplomatic relations with the state of Qatar and shutting down their mutual borders and shutting their airspace. This has significantly damaged the Gulf Cooperation Council. We were the leading players in creating the Gulf Cooperation Council, the GCC, back in the 1980s under President Ronald Reagan to contain Iranian influence in the Persian Gulf. The GCC today is a much, much weaker organization. The GCC is essentially split. Qatar is off by itself and supported by Turkey. Bahrain, Saudi Arabia, and the UAE are one alliance backed by the Egyptians. Kuwait stands off on its own trying to pretend it has nothing to do with the rest of the people in the GCC, and Oman has proclaimed its neutrality as it has for many, many years.

The U.S. spent many, many years trying to build up this organization and trying to integrate the militaries and the security services of the countries. It is difficult on the outside to know how severely damaged those relationships are, but there is no question the damage is significant. Who is the beneficiary of this? Once more, it is the Iranians. Just as the Yemen war has benefited the Iranians, the breakup of the GCC benefits the Iranians.

There is no end in sight to this. I spoke to State Department officials this week who are engaged very attentively in trying to end the siege, and they do not see any sign of any progress. It is time for the United States to take a more forceful action and press Saudi Arabia, the UAE, and Bahrain, to end the siege of Qatar.

Finally, and I will not say very much about this because Dr.  Agnes Callamard has said far more about it than I can, the question of killing and arresting critics from the crown prince. Jamal Khashoggi is the primary example, but there have been other attempts on critics, other efforts to stifle dissent. All of this in the context too of some of the worst repression we have ever seen in the history of the kingdom at home. And I would highlight the arrest this March of the former crown prince, Muhammad bin Nayef. Muhammad bin Nayef led the battle against al-Qaida in Saudi Arabia. He deserves enormous credit for defeating al-Qaida inside the kingdom and dealing with it outside the kingdom as well. That this man today is under arrest and under charge for corruption is extremely dangerous. I fear for his health. I fear for his life.

Saudi Arabia has never had a good human rights record, never been a paragon of human rights, most notably gender equality. But it was not in the past in the business of targeted assassinations abroad. This is a whole new threshold crossed, and, again, it has been Mohammed bin Salman who has been leading the charge. The United States is now fully implicated in being his defendant.

Now, I will just conclude by saying Saudi Arabia today is more a danger to the United States than it is an ally.

How will the 2020 presidential election shape U.S. policy in the Middle East?

There are no winners in US-China technology divide

‘Quad’ all about sending a signal to China

The US role in the Gulf War