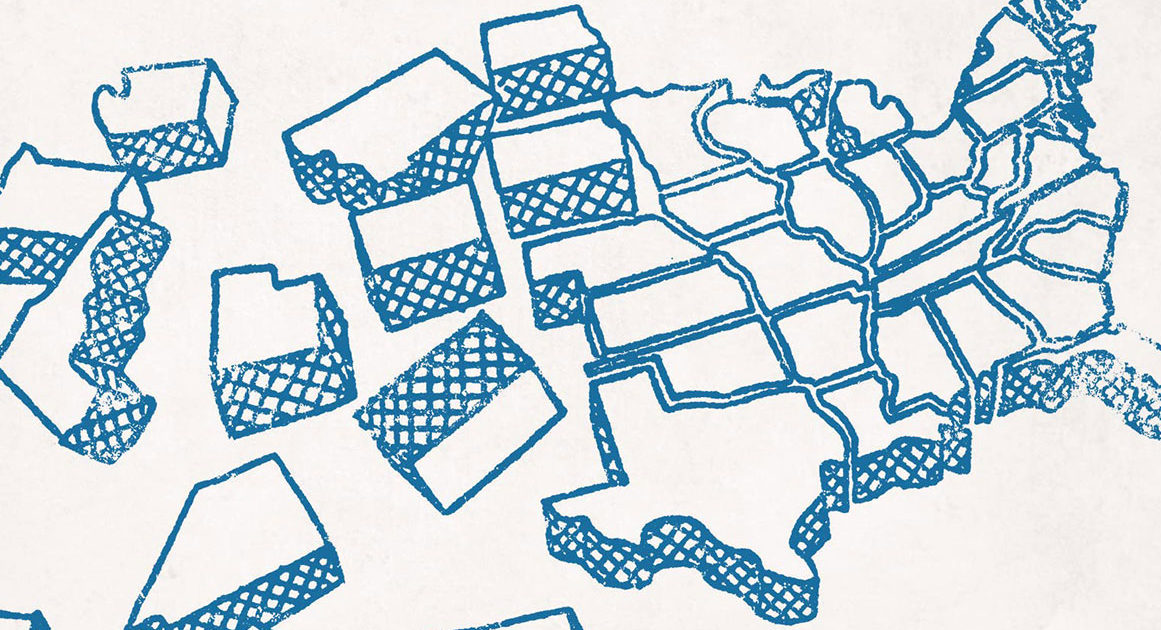 Break It Up: Secession, Division, and the Secret History of America’s Imperfect Union, by Richard Kreitner, Little, Brown and Co., 496 pages, $30

The late Thomas Naylor, gentle godfather of the modern Vermont independence movement, used to sign off with “God bless the Disunited States of America.”

Naylor attracted a stalwart and colorful band to his project, ranging from the diplomat George Kennan (the author of the Cold War “containment” policy had come to view the United States as overly confining) to a delightful mélange of populist “woodchucks” (native Vermonters), organic-farming greens, Ethan Allen impersonators, and more. Naylor’s Second Vermont Republic had a merry, slap-happy, larkish feel, but Naylor, who died in 2012, was dead serious. And now, barely two decades since secession talk first scented the Green Mountain air, the entire country is getting an invigorating whiff.

Break It Up—a book about America’s episodic secessionist flare-ups, by Nation contributor Richard Kreitner—may well be a firebell in the night, to borrow Thomas Jefferson’s phrase. Secession, after all, is our heritage and our probable future. It is as American as applejack, runaway slaves, and prison baseball. His fellow progressives, says Kreitner, “too hastily dismiss one of America’s founding principles—the right to alter or abolish a destructive form of government—as irreparably sullied by association with slaveholders.”

Kreitner argues that disunion “is a hidden thread through our entire history, from the colonial era to the early republic and the Civil War and beyond,” and he backs up that claim with a vigorous account that takes in everything from the fractious colonies of the 17th century to the irrepressible Aaron Burr’s separatist hijinks to the bloodbath of 1861–65 all the way up through secessionist feints and spasms in recent years by Black Panthers, Lone Star patriots, and people pissed off by the election of Donald Trump. (If history is a reliable guide, this last-named band will turn coat the day after the next Democrat is elected president, while Trumpian nationalists will experience sudden secessionist epiphanies.)

Kreitner takes a clear-eyed view of the Philadelphia Convention of 1787 and the subsequent ratification of the Constitution, seeing it as a coup in which the well-born, the articulate, and the merchant class of the coasts threw out the decentralist Articles of Confederation and fastened upon the 13 states a consolidated national government that would lead, as opponents such as Maryland’s Luther Martin warned, to empire and oligarchy.

Rightly observing that the campaign for the Constitution in the state ratifying conventions was marked by “deceit, censorship, and force,” Kreitner commends the localist vision of the Anti-Federalists, the original unheeded prophets of American history.

The Founders understood union as a strategic necessity, not a moral imperative. Join or die, as the Revolutionaries preached, is practical advice, not holy writ. Should union prove an obstacle to the enjoyment of life, liberty, and the pursuit of happiness, then to hell with it. When in the course of human events, and all that….

“New Englanders had been the original disunionists,” Kreitner notes. Some kicked at the Louisiana Purchase, seeing in expansion the seeds of corruption. The choleric Federalist Timothy Pickering, secretary of state under George Washington and John Adams, asked despairingly, “How many Indian wars, excited by the avidity of the Western and Southern States for Indian land, shall we have to encounter” before New England would cut the rest of the continent adrift?

The War of 1812 convinced many Northeasterners that the slavocracy held the whip hand and that the free states had better get out while the gettin’ was good. At the Hartford Convention of December 1814, New England delegates walked up to the precipice of secession and blinked, proposing instead a set of mostly praiseworthy constitutional amendments, including ones requiring a two-thirds vote to declare offensive war, admit new states, and impose embargoes. (These proposals are still on the floor, waiting to be picked up.)

Antebellum Northerners defiantly asserted the rights of the states by passing “personal liberty laws,” which nullified the Fugitive Slave Act. If the price of union included sending escaped bondsmen back to servitude, that price was too high. Ralph Waldo Emerson wrote: “Union is a delectable thing, and so is wealth, and so is life, but they may all cost too much, if they cost honour.”

The United States had simply grown too large for meaningful representative government. The scale had become inhuman. Yet expansionists had their greedy, beady eyes on Texas, California, and Oregon. Both parties were guilty: The Democrats wanted Cuba as lebensraum for slavery, while Republicans such as Charles Sumner, Thaddeus Stevens, and William Seward dreamed of a North American empire.

The interregnum between Lincoln’s election and his assumption of the presidency featured not only hot language (and acts) of secession by Southern fire-eaters but also a significant “good riddance” attitude among Northerners. Novelist Nathaniel Hawthorne, something of a Peace Democrat, said, “Whatever happens next, I must say that I rejoice that the old Union is smashed. We never were one people, and never really had a country.”

And the war came, as Lincoln said. And some of the most vocal advocates of disunion screeched for young men to go trampling out the vintage where the grapes of wrath were stored.

Abolitionist William Lloyd Garrison, who once had called the Constitution an “unholy alliance with slavery,” now whooped for war and became, as one biographer wrote, a “super-patriot who discovered traitors and treason everywhere.” The smell of gunpowder drove many an abolitionist, even the Christian pacifists, into the rooting section for Mars—though there were noted exceptions, such as Adin Ballou. Pretty political principles are usually the first casualty of war. It is so easy and cost-free to mouth Christian or humanist strictures against mass murder, but so hard to stand against the blood-lusting mob as it bears down on you.

Seven hundred thousand men died in an abattoir that, while it had the salutary effect of ending the wicked institution of slavery, was declared and fought, at first, for an abstraction called “Union.” The men who conceived this Union four score years earlier would scarce have believed it.

One always has quibbles with a book of engaged and eristic history. In his account of the anti-war Copperheads of the North, I wish that Kreitner had relied more on the work of Frank Klement, a pro–Bill of Rights University of Wisconsin progressive who cast doubt upon the lurid conspiracy tales spun by the Republican press. Kreitner largely ignores the most serious and historically justified contemporary secession movements, those of the Cold War states of Alaska and Hawaii, whose annexation disrupted the contiguous integrity of the Old 48. In the final chapters, when Kreitner brings the story up to date, the author uncharacteristically lapses into Yeah Team Blue/Boo Team Red caricature. Traditional Southern whites, he says, are distinguished by “barely disguised racism,” while “blue-collar voters in the heartland”—the people in hollowed-out and forgotten communities whose sons die in forever wars—are consumed by “a gnawing paranoia.”

But these cavils do not detract from the value of Richard Kreitner’s book. It is richly informative. And hey, the political margins are always the most interesting places. (The aspiring state of Franklin, now the eastern rim of Tennessee, proposed to make brandy legal tender and ban lawyers from public office. These issues, too, await their modern champion.)

Would a President Biden or a President Trump order a federal invasion of a breakaway state? Dropping the 82nd Airborne into the Green Mountains to put down Vermont’s peaceable disunionists seems preposterous, though in other instances one can easily imagine the corporate media preparing the ground for a Biden-ordered assault.

If, say, a libertarian-tinged state of the Rocky Mountain West should seek to leave the Union, the rebels surely would be smeared as meth-manufacturing, child-abusing white supremacists Or if Portland, Oregon, taking a cue from Fernando Wood, the Civil War–era mayor of New York City who proposed making Gotham a free and independent city-state, should declare an independent Portlandia, President Trump might well introduce those angry-faced white girls throwing Molotov cocktails and hissy fits to the M1 Abrams Tank.

Unlike in 1861, there is no sectional fault line along which the union could cleave. A likelier scenario is the fissioning of states, as mammoth entities such as California and New York, whose rural and small-city populations are powerless outlanders, fracture into more comprehensible units. Lose the Last Frontier and the Aloha State, gain Alta California and Upstate New York. You don’t even need to redesign the flag.

I hope Richard Kreitner’s book gains a wide readership, especially on the thoughtful left. A loose federation of states, as existed under the Articles of Confederation—or even a continent of smallish republics—would be preferable to the current madness.

Walt Whitman, a laissez-faire Democrat before the War, wrote in Leaves of Grass: “To the States or any one of them, or any city of the states, Resist much, obey little.” Resist much. Obey little. You can’t get much more American than that.

Why say ‘riot’ when you can be vague and sensitive instead, AP Stylebook urges in newest Orwellian guidelines

This Election Is More Than 'the Most Important of Our Lifetimes'