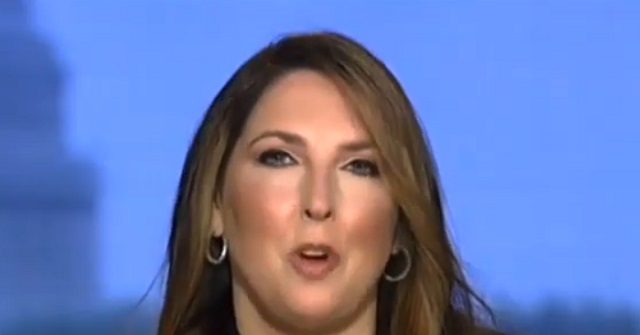 MCDANIEL: The president is always optimistic. He feels very good about where he stands. He’s had record approval with the Republican Party, you just saw the Gallop Poll that’s incredibly high, and you’re seeing these strong economic numbers. And we’ve seen Joe Biden hiding. He hasn’t been vetted. People haven’t seen the 2020 version of Joe Biden who hasn’t – who’s shifted so far left on many of his policies, and then this week we’ve seen him really be challenged for the first time in five weeks on allegations that many in the media have ignored, and finally, those are coming to light.

RADDATZ: Well, I know we here at ABC have not ignored and many in the media have not ignored it, but I want to turn to those accusations. You put out an ad – an attack ad – against Joe Biden, but the president has also been accused of sexual harassment, sexual misconduct, sexual assault, by more than a dozen women, and in a radio interview on Thursday, President Trump said, “while Tara Reade, the accuser, sounds credible, I would just say to Joe Biden, just go out and fight it,” adding, “I guess in a way, you could say I’m sticking up for him.” Is he sticking up for Joe Biden and how far will you go with (these attack ads)?

MCDANIEL: I’m going to take issue – I’m going to take issue with the media ignoring this. It has been appalling, the hypocrisy, as to how Brett Kavanaugh was treated versus Joe Biden. Brett Kavanaugh, every accuser was put on TV. It was wall-to-wall coverage. They went into his high school year book. They said he needed an FBI investigation. Michael Avenatti was on TV accusing him of gang rape from an accuser who’d never even met Brett Kavanaugh. And then you go to Joe Biden. Five weeks of silence. Nineteen interviews without a single question. He won’t let people go into his records in the University of Delaware. They’re calling on the DNC to do the investigation. It went from MeToo, MeToo, MeToo, to Move on, Move on, Move on in a nanosecond because he’s a democrat and the hypocrisy is appalling and it’s not just from the democrats, it’s from the media, and I’ll tell you, I think any outlet that conducted those 19 interviews and didn’t ask a single question should be disqualified from conducting any part of a presidential debate.

RADDATZ: So why did the president say he was, in a way, sticking up for him?

MCDANIEL: Because due process and the presumption of innocence has no longer been the standard in this country when it comes to Republicans and now Democrats are suddenly embracing those legal standards that we made the cornerstone of our country when it comes to Joe Biden, but they threw it out the window when it came to Brett Kavanaugh, and so did the media. And the hypocrisy has been appalling, and we need to do some self-reflection as to how Kavanaugh was treated versus how Biden is being treated right now.

Bill Barr Lies: With Mail-In Ballots, There Will Be ‘Buying And Selling Votes’

Calling Chomsky Out: The Riots Are A Full-Fledged Attack by The Hard Left To Topple American Society

Keisha Lance Bottoms warned, ‘If we fail to exercise our right to vote, we can lose it.’

Trump repeatedly attacked his former ally the Drudge Report, instead boosting other right-wing outlets more favorable to him

Uber threatens to shut down services in California after ruling