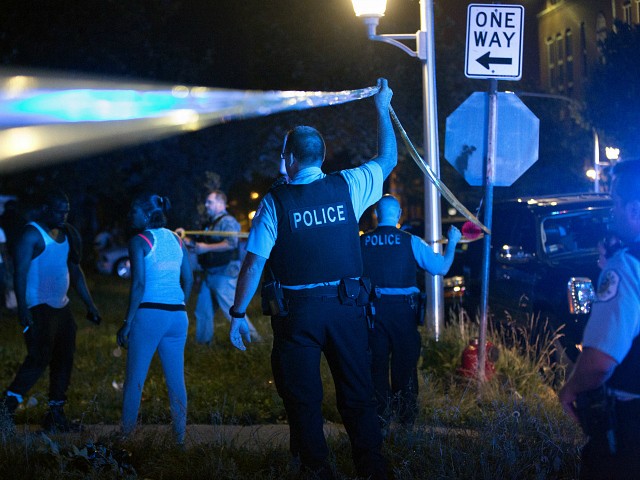 At least 17 people were shot, three fatally, from Friday afternoon into Saturday night in gun-controlled Chicago.

NBC 5 reports the first fatal shooting occurred about 3 p.m. Friday, when a male was shot multiple times and killed in the 5200 block of South Homan. Both NBC 5 and the Chicago Sun-Times reported no one was in custody for the shooting.

The second fatal shooting in the 36-hour time frame took place around 11:45 p.m Friday and the third around 2:40 a.m. Saturday. The third fatality was the outgrowth of a “verbal altercation,” which resulted in a gun being drawn and a 30-year-old man being shot in the chest.

As for the non-fatal shootings, least three of the Chicago shooting victims were women. In one instance “in the 1800 block of North Sawyer, a 36-year-old woman was driving in her vehicle when a gray sedan pulled up next to her and an unknown male offender inside fired shots.”

She was wounded but able to drive herself to the hospital for treatment.

On April 19, 2020, Breitbart News reported 14 people were shot in gun-controlled Chicago in just over 24 hours.

On April 27, 2020, the Chicago Tribune reported the number of homicides in Chicago had already hit 713, which was 79 more homicides than were witnessed by that same time in 2019.

Debate commission 'now an entrenched part of the Washington swamp'

Orthodox Jews in Brooklyn Furious at Media for Singling Out Community

Kamala Harris – In Her Own Words by Newt Gingrich

Trump Jokes That He May Leave US If Biden Wins