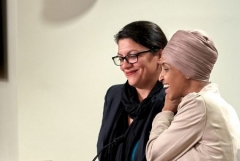 (CNSNews.com) – Rep. Rashida Tlaib (D.-Mich.) sent out a pair of tweets on Saturday in which she told Detroit police chief James Craig to “honor Detroiters”—as they protest—or resign and said that she had been “inspired” by the ongoing protests in that city.

“Chief Craig, ours is a city where movements are birthed, not suppressed,” she said.

“Honor Detroiters or step aside,” Tlaib said to the police chief.

“The fight to demilitarize the police is as much national as it is local,” Tlaib said in a follow-up tweet.

“I’ve been inspired by the 100+ days of protest for justice in Detroit,” she said. “Meanwhile the Police Chief suppresses free speech and bashes protesters on Fox News while welcoming Trump’s federal agents with open arms.”

AI is Key to China Infrastructure Plan, as is AI Talent

Fade the Fed and Profit from Stagflation

77 dead in floods and mudslides in India’s Assam state