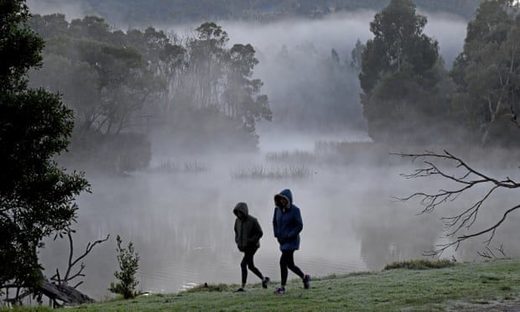 Record cold and heavy rain could sweep over Victoria, New South Wales, South Australia and parts of Queensland in coming days as “the strongest cold front of the year” moves across Australia.

Temperatures could be between 8C and 14C below average in the country’s south-east, and Melbourne and Canberra could break their records for coldest day in April, according to the Bureau of Meteorology.

One of the bureau’s forecasters, Dean Narramore, added that parts of northern and central South Australia could experience “one of the coldest April days since the 60s or 70s.”

Frost is forecast for inland parts of New South Wales and Victoria.

“It’s pretty unusual to see a cold front this strong, this early in the year, Narramore said on Wednesday, as he described it as “the strongest cold front of the year”.

“It really isn’t until Sunday that we will see those conditions ease,” he said.

“Then we will see a high pressure system move in, which means, with that cold air still lingering, widespread frost is possible, particularly for inland areas as we approach the weekend and into early next week”.

Rain, storms and potential flooding will also accompany the cold snap. Up t0 15mm of rain is forecast for nearly the whole of Victoria, with more in Melbourne (up to 25mm), the Gippsland region and the state’s north-east.

Up to 150mm could fall in the Victorian alps, and there will be between 50mm and 100mm in large swathes of the south-east including Gippsland, the NSW south-west slopes and Riverina, and as far north as Ivanhoe and Wilcannia.

Wagga Wagga is forecast to get up to 50mm and Canberra up to 25mm on Wednesday, and the bureau has issued flood warnings for the Bell, Belubula and Tumut rivers.

On Thursday that rain will move north with falls up to 50mm for much of central NSW, from the NSW-Victoria border near Albury up to Dubbo. Much of southern Queensland is also expected to get falls of up to 10mm.

There’s even a chance of snow on Thursday evening in the central tablelands above 1,100 metres, according to the bureau.

Storm surge could also cause the tide at Port Phillip Bay to “exceed the highest astronomical tide of the year”, Narramore said, due to the “push of water from strong winds”.

The Left Craps Out

When to Start Seeds for Spring Garden (BEGINNERS GARDEN HELP)

Mothers at quarantine centers in El Salvador are serenaded

DURHAM GOES FULL THROTTLE! IT ALL GOES BACK TO BARRY/SHIFTY V NUNES/TRUMP GETS THE BAND BACK 2GETHER

Art for water? How a Picasso raffle will bring water to Africa.