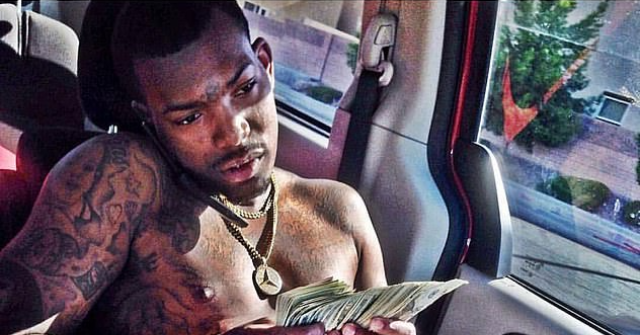 A Tennessee rapper who boasted about getting rich off $1.2 million in unemployment fraud was arrested Friday in Los Angeles.

Rapper Nuke Bizzle, who goes by Fontrell Antonio Baines, 31, in real life, “boasted in a YouTube music video about getting rich from committing unemployment benefits fraud,” the Justice Department said in a statement.

Baines was arrested for allegedly obtaining California Employment Development Department (EDD) debit cards issued in other people’s names, including those who had their identities stolen.

Baines, who is originally from Memphis, Tennessee, got his hands on at least 92 EDD debit cards containing more than $1.2 million in benefits and had those cards mailed out to addresses in the Beverly Hills and Koreatown areas of greater Los Angeles, according to the Justice Department.

The rapper and others involved in the scheme accessed more than $704,000 of the $1.2 million in benefits by making cash withdrawals using the debit cards and using the withdrawn money to pay for goods and services.

“Baines allegedly exploited the Pandemic Unemployment Assistance (PUA) provision of the CARES Act, which is designed to expand access to unemployment benefits to self-employed workers, independent contractors, and others who would not otherwise be eligible,” federal officials said, according to the Associated Press.

According to a music video called “EDD,” Baines is seen holding up what seems like stacks of envelopes from the employment agency while rapping, “got rich off of the EDD.”

Another rapper in the video says at one point, “You gotta sell cocaine, I just file a claim.”

Las Vegas Police also arrested Baines on September 23 after discovering he had seven debit cards under other people’s names.

If convicted on all the charges, he could face a maximum sentence of up to 22 years in prison.

Hollywood's Latest Get Out the Vote Effort: Dressing Up as Chickens

As Two ‘Ambushed’ L.A. Police Officers Fight For Their Lives, Protesters Scream ‘We Hope They Die’

Talk About Crazy: This Fringe Conspiracy Theorist Believes Hollywood Isn't Run By A Bunch Of Pedos

Michelle Obama Teams Up With LeBron James For Voter Push