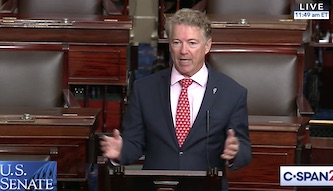 “It is a fatal conceit to believe any one person or small group of people has the knowledge necessary to direct an economy or dictate public health behavior. I think government experts need to show caution in their prognostications,” Paul said at the Senate Health, Education, Labor and Pensions Committee hearing, which featured so-called coronavirus experts from the Trump administration.

“It’s important to realize that if society meekly submits to an expert and that expert is wrong, a great deal of harm may occur when we allow one man’s policy or one group of small men and women to be foisted on an entire nation,” Paul added.

Paul pointed to the facts of what has happened in countries that have opened up their schools and how it did not cause massive outbreaks of COVID-19.

“Take for example government experts who continue to call for schools and day care to stay closed or that recommend restrictions that make it impossible for a school to function. There are examples from all across the United States and around the world that show that young children rarely spread the virus,” he stated, referencing countries such as Denmark, France and Germany that have re-opened.

“No spike when schools are opened. Central planners have enough knowledge somehow to tell a nation of some 330 million people what they can and can’t do,” Paul said.

The COVID-19 Battle: A Look at the Treatments Currently Being Used against the Coronavirus

From Hopelessness to Happiness (8am)

How will airlines get flying again?