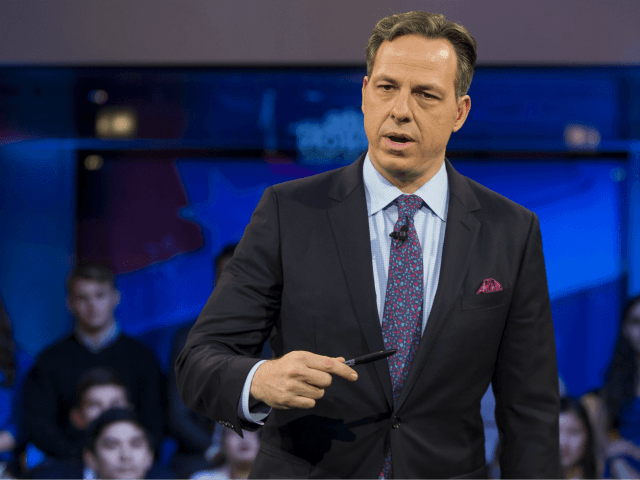 As Breitbart News and others have explained, Trump said the Neo-Nazis should be “condemned totally,” and referred only to those marching against — and for — the removal of a Confederate statue as “very fine people.”

However, on Sunday morning, interviewing Michigan Gov. Gretchen Whitmer, Tapper described Trump as having referred to “those marching alongside neo-Nazis in Charlottesville as very fine people.”

Tapper was quoting — or paraphrasing — Halie Soifer, the executive director of the Jewish Democratic Council of America, which is aligned with the Democratic Party. Soifer condemned protests last week at the Michigan State Capitol against Whitmer’s stay-at-home orders, which are regarded by many in the state as draconian.

A few protesters carried guns (legally); there were also posters that used swastikas to cast Whitmer as a fascist. There were other offensive motifs: one sign read “tyrants get the rope,” and there were reports of Confederate flags.

Some Republicans condemned the “behavior and tactics” of the protesters, while acknowledging the cause that brought protests to the Capitol was a legitimate one. Trump tweeted on Friday: “These are very good people, but they are angry. They want their lives back again, safely! See them, talk to them, make a deal.”

Tapper cleaned up that comment on Sunday’s edition of State of the Union by reporting (rather generously) that Soifer had criticized Trump for praising “those marching alongside neo-Nazis in Charlottesville.”

Likewise in Michigan. The fact that some “jackasses” — as Michigan Senate Majority Leader Mike Shirkey (R-Clarklake) called them — showed up at the State Capitol does not mean that all of the people who are irritated by Whitmer’s orders are extremists.

True, the extremists damage a legitimate cause. But Democrats, and the media, help them by inflating their importance. Opponents of excessive stay-at-home orders are not neo-Nazis, and it damages political discourse to pretend that they are.

Joel B. Pollak is Senior Editor-at-Large at Breitbart News and the host of Breitbart News Sunday on Sirius XM Patriot on Sunday evenings from 7 p.m. to 10 p.m. ET (4 p.m. to 7 p.m. PT). His new book, RED NOVEMBER, is available for pre-order. He is a winner of the 2018 Robert Novak Journalism Alumni Fellowship. Follow him on Twitter at @joelpollak.

If Half the Country’s Deaths Were in Montana, Would New York Shut Down?

Mass murder in Canada exposes the truth that liberty control only has one goal: Gun confiscation

Is The “Second Wave” Of The Coronavirus Pandemic Already Here?

EXCLUSIVE: Trump Drops the Hammer on Fauci After Disturbing White House Briefings on Doctor’s Past

Dem Sen. Warner: 'No Indication that the W.H.O. Was in Any Way in Cahoots with the Chinese Government'

How To Zero Your Preps

Pelosi Now Says U.S. Should Have Stopped Americans Coming Back From China

'Why Is a Liquor Store Essential and I'm Not?' Asks Store Owner During N.Y.C. Coronavirus Lockdown