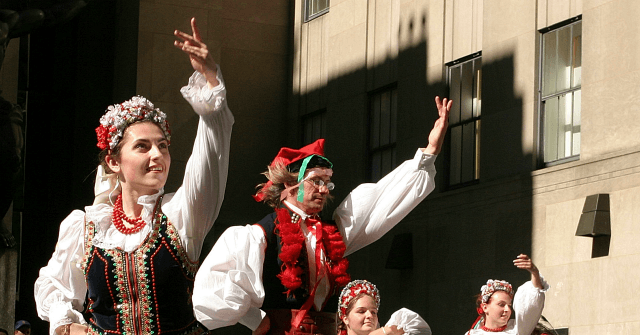 Poles in America have urged Joe Biden to correct his “false” and “harmful” comments about Poland at a recent town hall, where he appeared to lump it in with Belarus and other “totalitarian regimes”.

“You see what’s happening in everything from Belarus to Poland to Hungary and the rise of totalitarian regimes in the world, and, as well as, this President embraces all the thugs of the world,” Biden had said on October 15th — causing enormous offence in the latter two countries, both EU democracies and NATO allies.

‘Polonia’, as the Polish community overseas is known, addressed the former vice president’s remarks in a letter seen by Breitbart London, organised on behalf of a number of diaspora organisations by the Smolensk Disaster Commemoration Committee, which was formed in 2010 after a plane carrying the then-Polish president — twin brother of the current head of Poland’s ruling Law and Justice (PiS) party — crashed while on the way to a ceremony for Polish prisoners massacred by the Soviet communists in Katyn, killing all on board.

“We, like most Poles in America, are deeply disappointed by your commentary on Poland during the Town Hall event on October 15th,” the letter began, telling the 77-year-old Democrat that his comments had “appeared to expose your misapprehension of Central Europe
and were a harmful, false characterization of Poland.”

“Compared to other European nations, Poland has been one of the strongest allies of the United States. Poland has set an example in fulfilling its obligations to the North Atlantic Treaty Organization. Polish soldiers fought gallantly in the Second World War against German and Russian totalitarianism, and in modern times participated in U.S.-led military efforts in the Middle East,” the letter emphasised.

“Thanks to the emphasis on the trans-Atlantic security policy and co-operation with the U.S., undertaken by the Polish government since 2016, relations between Poland and the US are today the strongest and most productive in history,” it added, in what was perhaps something of a veiled jab at the comparatively lacklustre Polish-American relations under the Obama-Biden administration.

Under the Trump administration, Poland has begun purchasing Liquified National Gas (LNG) from the United States, arranged for U.S. troops to be relocated from Germany to Poland — due in no small part to the Germans’ serial “delinquency” on their NATO payments — and secured the long-awaited admission of Polish citizens to the U.S. visa waiver program, among other achievements.

Bond Between America and Poland ‘Stronger Than Ever’ Thanks to Trump, Say Ambassadors https://t.co/TAEM9cUSiU

The letter writers stressed that Poland is “home to Europe’s first and the world’s second constitution”, and “is now a young and strong democracy where everyone’s freedom is ensured and protected while public debate is diverse, vibrant and unobstructed, even if heated at times” — assuring Biden “Poland as a nation has suffered too much for over two centuries until just recently, has lost too many of its people to German Nazi and Soviet industrialized murder and communist repression and desolation” to choose “totalitarianism” when it “freely votes” in national elections.

The Gazeta Polska Clubs organisation, whose co-ordinator signed the letter to Biden, suggested on social media that it was not hopeful of persuading the Democrat to change his tune, however, saying that it was “unfortunately not his first statement slandering Poland and Poles, showing also his ignorance and disregard for Central Europe.”

This may have been a reference to Biden’s past remarks to the New York Times editorial board that, during the 2016 election campaign, “We stopped showing up at the Polish-American club. We stopped showing up, and we all went to you, the really smart people” — which some saw as dog-whistling old and inaccurate stereotypes about Polish people’s intelligence.

Joe Biden has triggered a huge diplomatic row with NATO members Hungary and Poland after appearing to lump them in with Belarus as “totalitarian regimes”, with the Hungarian government demanding answers on his family’s alleged corruption in Ukraine. https://t.co/XCpkcmn5lq

The damage done by Biden’s remarks was even greater in Hungary, rekindling memories of “the continuous lecturing, accusations and attacks” against the country’s conservative, pro-border wall government under the Obama-Biden presidency.

“Obviously, this is why the Democratic challenge involved Hungary in the presidential campaign,” he added acidly, before remarking that Biden answer should keep quiet about Hungary until he addresses “some of those old questions that have been out there for a while… tell us why he put pressure on the Ukrainian government to fire its chief prosecutor, and how all of this related to the investigation into his son’s Ukrainian energy deals grinding to a halt.”

From the Soviet Union to Indiana, Republican House Candidate Stands Against Socialist Future

FLASHBACK: Health Experts Predicted Up To 200,000 COVID Deaths In US ‘If We Do Things Almost Perfectly’

What’s Next for Lebanon?

The Last Time A President Was Seriously Ill…Eisenhower ’55 & ’56 – History Video!

Politics and Social Media: Should We Use Exit, Voice, or Loyalty?