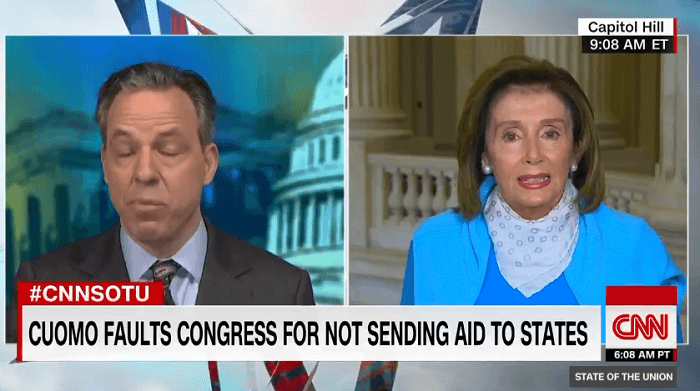 “Actually tens of thousands of people were allowed in from China, it wasn’t as it was described as this great moment,” Pelosi told CNN’s Jake Tapper.

“So if you’re going to shut the door because you have an evaluation because of an epidemic, then shut the door,” she concluded.

That is a wild ride from ‘travel bans are racist’ to ‘we should have slammed the door shut on our own citizens.’

The House Speaker believes travel bans from coronavirus-spreading nations are racist, but banning Americans is necessary.

Granted, Jake Tapper doesn’t possess a wit rapier enough to counter Pelosi’s claims, but you would have expected some pushback.

Rep. Dan Crenshaw (R-TX), in a verbal beatdown of a similar argument made by HBO personality, Bill Maher, addressed the travel as the New York Times reports, not applying to “40,000 Americans and other authorized travelers (who) have made the trip” from China to the United States.

“U.S. citizens,” Crenshaw explained were being allowed in, adding that Maher would “have to make the argument then that we shouldn’t allow them in.”

Pelosi just made that argument.

When the order was imposed, Pelosi was publicly and vehemently opposed to even the ban as “outrageous, un-American travel ban threatens our security, our values and the rule of law.” Now it appears the order was not racist, but it didn’t go far enough? https://t.co/RBA3tLRN99

The argument that everybody should have been banned from the country is incredibly dishonest, even by Pelosi’s already low standards.

In late January, after President Trump had taken action to help combat the spread of the pandemic, Pelosi announced that the House would be pushing legislation that not only “imposes limitations on the President’s authority to suspend or restrict aliens from entering the United States” but also “terminates certain presidential actions implementing such restrictions.”

The California Democrat accused Trump of implementing such actions as “cruel” and “un-American … in all of its iterations.”

Watch the latest video at foxnews.com

“Adam Schiff, I previously thought, was the biggest fraud in Congress,” he said. “I have now reevaluated.”

“Nancy Pelosi – Adam Schiff is a rookie, a grapefruit league ballplayer – compared to this serial fraudster in Nancy Pelosi,” Bongino continued. “She is a serial liar and a fraudster.”

No truer words have ever been spoken.

What Is Government's Proper Role in Reopening the Food Economy?

Quarantine Protesters in Michigan Show Up with GUNS