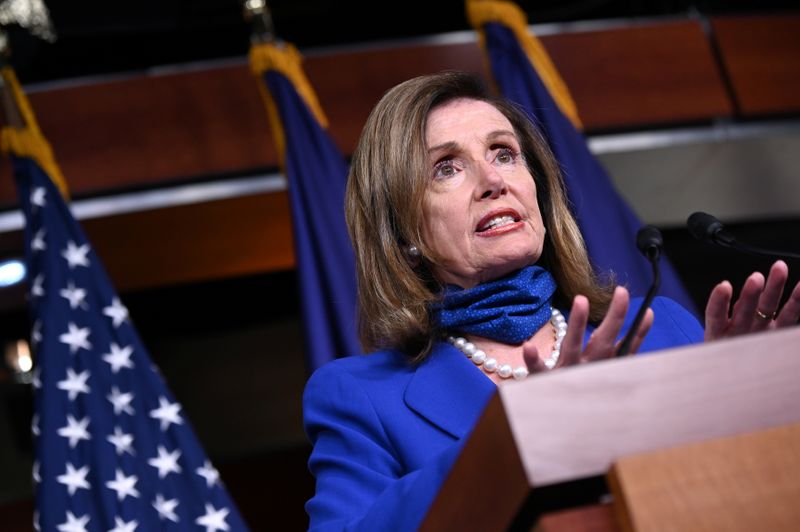 FILE PHOTO: U.S. House Speaker Nancy Pelosi speaks at a news conference ahead of House votes on “the Child Care Is Essential Act” and “the Child Care for Economic Recovery Act” in the U.S. Capitol in Washington, U.S. July 29, 2020. REUTERS/Erin Scott

“I think the president has been spreading disinformation about the virus and she is his appointee so, I don’t have confidence there, no,” Speaker Pelosi told ABC’s “This Week” when asked if she has confidence in Birx.

Birx, asked about Pelosi’s comment during an interview with CNN’s “State of the Union,” said she had great respect for Pelosi and attributed the criticism to a New York Times article on the White House pandemic response that described Birx as having embraced overly optimistic assessments on the virus.

“This was not a pollyannish view. I’ve never been called pollyannish, or non-scientific, or non-data driven,” Birx said. “I will stake my 40-year career on those fundamental principles of using data to implement better programs and save lives.”

Pelosi did not elaborate about Birx, a lead member of the coronavirus task force along with Dr. Anthony Fauci, director of the National Institute of Allergy and Infectious Diseases.

According to a report in Politico, Pelosi attacked Birx’s credibility during a meeting last week with Treasury Secretary Steve Mnuchin and White House Chief of Staff Mark Meadows. She accused Birx of spreading disinformation about the coronavirus pandemic, while praising Fauci as “a hero,” Politico said.

“Deborah Birx is the worst. Wow, what horrible hands you’re in,” Pelosi told them, according to Politico.

Disney’s ‘Mulan’ to skip most movie theaters for streaming

George Floyd death: What US police officers think of protests

🚨Warning!🚨🚨This may be your only chance!

‘The Five’ ‘heartbroken’ over fatal attack on NJ judge’s family

A Historical Reminder of What Defines the United States, As Told by a Former Slave

Calif. Church That Faced Fines Moves to Outdoor Services: 'I Do Not Want to See People Lost on My Watch’

A Guide to CB Radio Language and 10 Codes

I Grew Up in a Cult