Speaker Nancy Pelosi (D-CA) announced on Thursday that Democrats are trying to negotiate for nearly $1 trillion for states and local governments in the next installment of the taxpayer funded coronavirus relief package – which will be the single largest request by Democrats in the upcoming ‘CARES 2’ legislation. 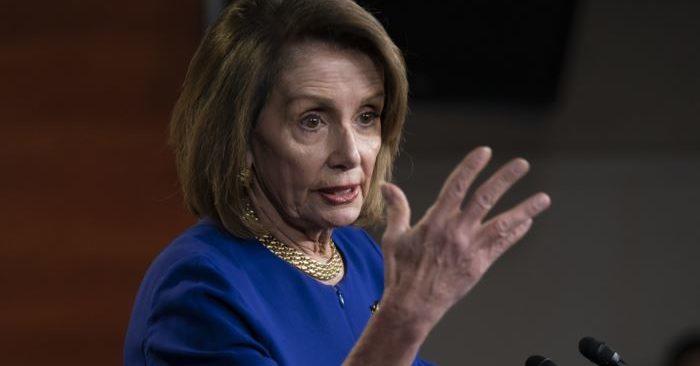 The package is also expected to include hundreds of billions in relief for workers, businesses and families, according to The Hill.

“We’re not going to be able to cover all of it, but to the extent that we can keep the states and localities sustainable, that’s our goal,” Pelosi told reporters on Thursday from the basement of the Capitol.

It means the Democrats’ next emergency relief proposal is likely to approximate the massive size of the initial CARES Act, adopted March 27, which provided $2.2 trillion in emergency help largely for major industries and small businesses left devastated by the economic fallout of the global pandemic.

It also foreshadows a fierce fight with Republicans in the Senate, where GOP leaders had rejected any new funding for state and local governments in the last “interim” coronavirus bill, enacted last week, and are wary that any new help for states going forward would simply bail out governors for fiscal mismanagement preceding the health crisis. –The Hill

Pelosi slammed McConnell’s position on Thursday, saying that Democrats will fight to the bitter end to ensure that medical workers and first responders are not laid off by cash-strapped state and local government agencies which have seen tax revenues plummet amid the pandemic.

“They’re risking their lives to save lives, and now they’re going to lose their jobs? It’s just stunning, and we have to address it,” said Pelosi, adding “This isn’t about any other budget issues for states; it’s about the coronavirus outlays [and] revenue lost.”

According to Pelosi, assistance could be sprinkled over states in three tranches, “not just for one year,” but “over time.”

Aside from the state funding, Democrats in CARES 2 are also eyeing vast new spending for direct cash payments to individuals, medical equipment and unemployment insurance, which has taken on new gravity as roughly 30 million people have filed for jobless benefits over the last six weeks alone.

Democrats are also fighting to include tens of billions of dollars to expand broadband services around the country, particularly in rural and other underserved regions, where students and medical providers have had a tougher time accessing the internet during the crisis.

“The only way you can have online learning is with broadband,” said Rep. James Clyburn (D-S.C.), the House majority whip and leading champion of the broadband provisions.

The timing of CARES 2 remains unclear. While the House was initially scheduled to be in session next week, Democratic leaders scrapped that plan on Tuesday, citing the advice of the Capitol physician. And Pelosi on Thursday set a tentative return date for the week of May 11, although committees are expected to be back earlier to work on CARES 2. –The Hill

“We’re not coming back this week. Our plan is to come back the following week,” said Pelosi – who ruled out an interim bill like last week’s $484 billion package which largely went towards replenishing the Paycheck Protection Program aimed at helping small businesses.

“We’re all for that, and we just did do an intervention. But we must do a CARES bill now. We cannot put that off,” she said, adding “Our next plan will be CARES 2.”

Grenfell Inquiry to resume when possible, but not for several weeks

How to get mutual aid to those who need it most

Start To Recession-Proof Your Household Now – Here’s How

How Trump and his media allies pushed the conspiracy against China

Will You Have to Pay Back Any of Your Stimulus Check?

Where do we go from here? Riot Edition

Carrie Lam: One of the safest cities in the world has become cause of concern