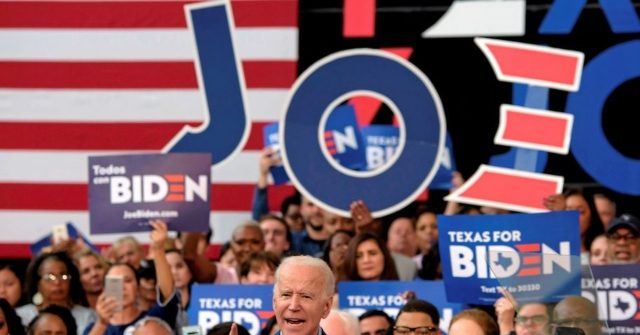 One-in-four Democrats and liberals say it is “better for the government to bring in new foreign workers to help keep business costs and prices down,” an October poll by Rasmussen Reports reveals.

In contrast, half as many Republicans — 14 percent vs. the Democrats’ 27 percent — prefer the government to deliver foreign workers to employers, says the October 4-8 poll of 1,250 likely voters.

Rasmussen’s results suggest that Democrats and liberals are two times more likely than conservatives to favor an inflow of cheap and compliant foreign labor to U.S. companies, despite evidence of much economic damage to other Americans.

On the flip side, almost 74 percent of Republicans and conservatives said it would be “better for businesses to raise the pay and try harder to recruit non-working Americans even if it causes prices to rise.” That view was held by just 56 percent of Democrats and 55 percent of liberals.

The liberals’ and Democrats’ pro-migration view is an extreme outlier. The poll showed that a lopsided majority of Americans prefer that American workers get hired before the government imports more workers, by 64 percent to 20 percent.

Rasmussen’s results match many prior polls, which shows that the public welcomes legal migrants — but much prefers that new jobs go to Americans first. In July 2020, Breitbart reported:

Just 12 percent of swing-voting “moderate” suburban women, and just 19 percent of all likely voters, agreed with business groups and Democrats that the government should “allow employers to import foreign workers to fill job openings instead of recruiting among these unemployed Americans.”

When businesses say they are having trouble finding Americans to take jobs in construction, manufacturing, hospitality and other service work, what is generally best for the country? Is it better for businesses to raise the pay and try harder to recruit non-working Americans even if it causes prices to rise, or is it better for the government to bring in new foreign workers to help keep business costs and prices down?

Should Congress increase the number of foreign workers taking higher-skill U.S. jobs or does the country already have enough talented people to train and recruit for most of those jobs?

Almost 40 percent of Democrats and liberals picked: “Increase the number of foreign workers taking higher-skill U.S. jobs.”  Only half as many — just 20 percent — of conservatives and Republicans favored more foreign workers.

Fewer than half of all liberals (45 percent) and Democrats (48 percent) favored the alternative answer: “The country already has enough talented people to train and recruit for most of those jobs.” But that answer was picked by 71 percent of Republicans and conservatives.

The Democrats’ skew towards foreign workers is likely shaped by several factors, including hatred of President Donald Trump, their progressive sympathy for outsiders, and even personal gains from the inflow of cheap and compliant labor. But the numbers are also inflated by the Democrat Party’s collective and celebrated push to gain electoral power from a continued inflow of diverse migrants — and also by candidate Democrat presidential candidate Joe Biden’s very pro-migration declarations.

Democrats’ support for a cheap-labor economy is funded by investors and donors but is wrapped in a “diversity” ideology that insists Americans should not ask their government to favor them over other peoples. For example, Biden told an ABC town hall meeting on October 16:

We are a country that is a country of slaves who came here 400 years ago, indigenous people, and everyone else is an immigrant. And we’re a diverse country. Unless we are able to treat people equally, we’re — we’re just never going to meet our potential.

Business groups promote their agenda by funding polls that push people to agree with the Cold War claim that the United States is a “Nation of Immigrants” instead of a nation of Americans.

Open-ended legal migration is praised by business and progressives partly because the arrival of migrants helps to transfer wealth from wage-earners to stockholders.

Migration moves money from employees to employers, from families to investors, from young to old, from homebuyers to real estate investors, and from the central states to the coastal states.

Joe Biden signals a 2021 welcome for Venezuelan & Cuban migrants.
Kinda like opening a window in a submarine.
The cost of progressives’ vanity is imposed on poorer Americans who lose wages & homes. https://t.co/ngfEykNYqE

Even When He’s Courting Us, Trump Keeps Insulting Black Folks

The Coming Demise of Identity Politics

‘FOR REAL’: Joe Biden Botches The Pledge Of Allegiance

Biden Getting Excited As Segregation Coming Back Into Style