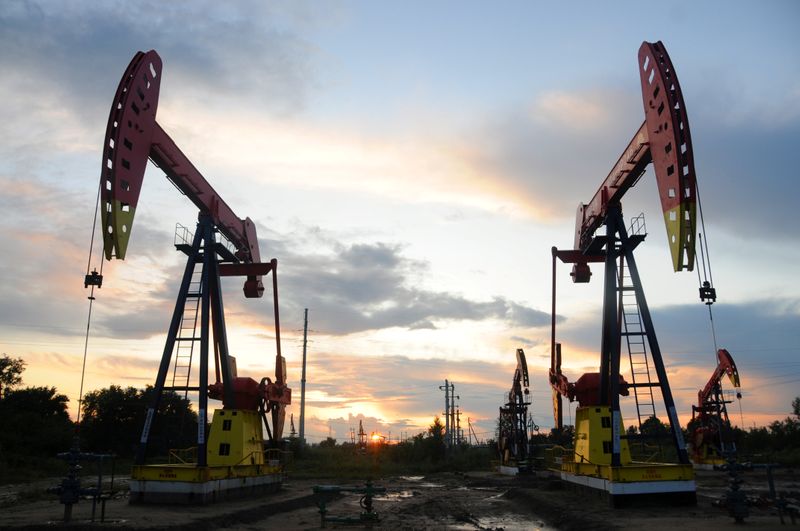 By Sonali Paul and Koustav Samanta

MELBOURNE/SINGAPORE (Reuters) – Oil prices slipped on Thursday, weighed down by concerns that surging coronavirus infections around the globe could jeopardize a recovery in fuel demand just as major oil producers are set to raise output.

Both benchmark contracts rose on Wednesday after the U.S. Energy Information Administration (EIA) reported the largest one-week fall in crude stocks since December.

“Oil should have done much better after the massive fall in U.S. crude inventories of over 10 million barrels, as well as the tailwinds from a generally much weaker U.S. dollar,” said Jeffrey Halley, senior market analyst at OANDA.

“It may well be that oil markets are pricing in a higher risk of an economic downturn in the United States and places elsewhere due to COVID-19.”

U.S. gasoline and distillate stocks, which include diesel and heating oil, both rose against expectations for inventories to fall, highlighting the patchy nature of the recovery in fuel demand in the world’s biggest oil consumer.

“As gasoline demand for commuting purposes has been impaired by telecommuting and a higher unemployment rate, a full gasoline demand recovery to above 9 million barrels per day could stall and does not look likely for some time,” analysts at Citi Research said in a note.

Prices were anchored on Thursday by demand concerns with a rise in COVID-19 infections raising the prospect for lockdowns to be reimposed.

Deaths from COVID-19 topped 150,000 in the United States on Wednesday, while Brazil, with the world’s second-worst outbreak, set daily records of confirmed cases and deaths. New infections in Australia hit a record on Thursday.

The potential hit to the demand rebound comes just as the Organization of the Petroleum Exporting Countries (OPEC) and its allies, together known as OPEC+, are set to step up output in August, adding about 1.5 million barrels per day to global supply.

(Reporting by Sonali Paul in Melbourne and Koustav Samanta in Singapore; Editing by Richard Pullin and Christian Schmollinger)

Clearing land on a budget…I may never get this mess done!

What is the Advantage of Lump Sum Investing vs Dollar-Cost Averaging?

Mayor, City Council And State Have ‘Given The Streets Back To The Criminal,’ Says NYC City Police Union President

“Where are the police?” Anti-police Minneapolis City Council begs department to stop surging crime rate three months after voting to defund and abolish the police

The War for Free Speech Is Here

Amid Pandemic, Domestic and Sexual Abuse Is Skyrocketing, Activists Worry That News Is Being Buried

Trump to make appearance every night of RNC this week