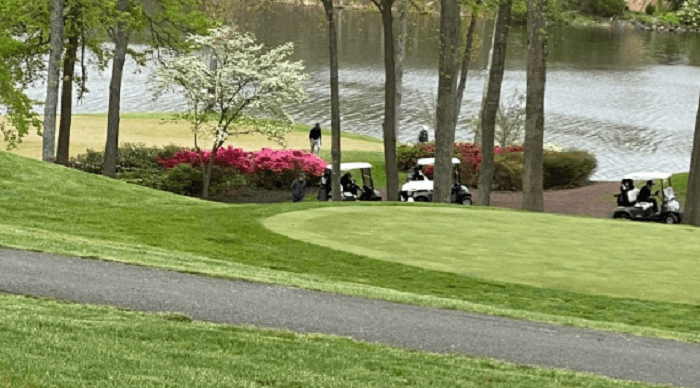 Mrs. Obama’s message will go out to people over the next couple of weeks according to Washington, D.C. Mayor Muriel Bowser.

“Remember, we urge you to stay home except if you need essential health care, essential food or supplies or to go to your essential job,” the former First Lady advises.

While the media excoriates President Trump and Vice President Mike Pence over every little mistake they make in regards to social distancing rules, there has been nary a peep about the fact that Obama was photographed on a golf course in Virginia just days earlier.

Essential travel for me, but not for thee.

One sentence. Had this been President Trump it would have warranted a 24/7 news cycle.

Barack Obama playing golf because he gets special treatment during forced stay at home orders. pic.twitter.com/WwCUOQJxGA

Carlson said Obama “is clearly enjoying himself and honestly, why wouldn’t he be? It’s beautiful out on the links.”

“You’ll notice there aren’t many people around,” he added. “That’s because both Virginia and Washington, D.C., are still under quarantine.”

“Everybody else is locked at home, as they have been for more than a month, but not former President Obama,” Carlson observes. “For him, golfing at his country club was an essential activity.”

DC residents — If you have any #coronavirus symptom, you can get a free test by calling 1-855-363-0333@MichelleObama is helping us get out the word about free testing and reminding residents to #StayHomeDC except for essential trips for food, medicine or exercise pic.twitter.com/fRZ7aeZJf8

A Mockery of Quarantines

Carlson went on to note that our leaders, in general, seem to be locking down the country for the average person but not for themselves.

“Across the country, our leaders are making a mockery of the quarantines they so enthusiastically enforce,” Carlson fumed.

“They have no intention of abiding by the restrictions that they impose on their fellow citizens, they have no interest in any scientific development … [even as] evidence accumulates that mass quarantines are not achieving what politicians claimed they would achieve, not even close.”

Obama isn’t the only hypocrite, however.

You can’t change the past & will always have blood on your hands.

If I were you, I’d be working night & day to help those in most dire need. Maybe start with your inadequate homeless services. pic.twitter.com/i71ulg7Hvl

New York City Mayor Bill de Blasio has, on multiple occasions, been spotted traveling to Prospect Park in the midst of the coronavirus crisis, even as he gives Jewish people final “warning(s)” for breaking social distancing norms.

Gov. Phil Murphy Thanks Donald Trump for Coronavirus Help 'In Our Darkest Hour of Need'

AOC Claims Illegals Detained By ICE ‘Have Not Committed A Crime’

How the COVID-19 Pandemic Could Lead to Global Famine

No Evidence for Global Shutdown with Gerald Celente

“Psychic” Tiktok Star CLAIMS to Know when the Coronavirus Will End?

Not the Time to Preach Escapism