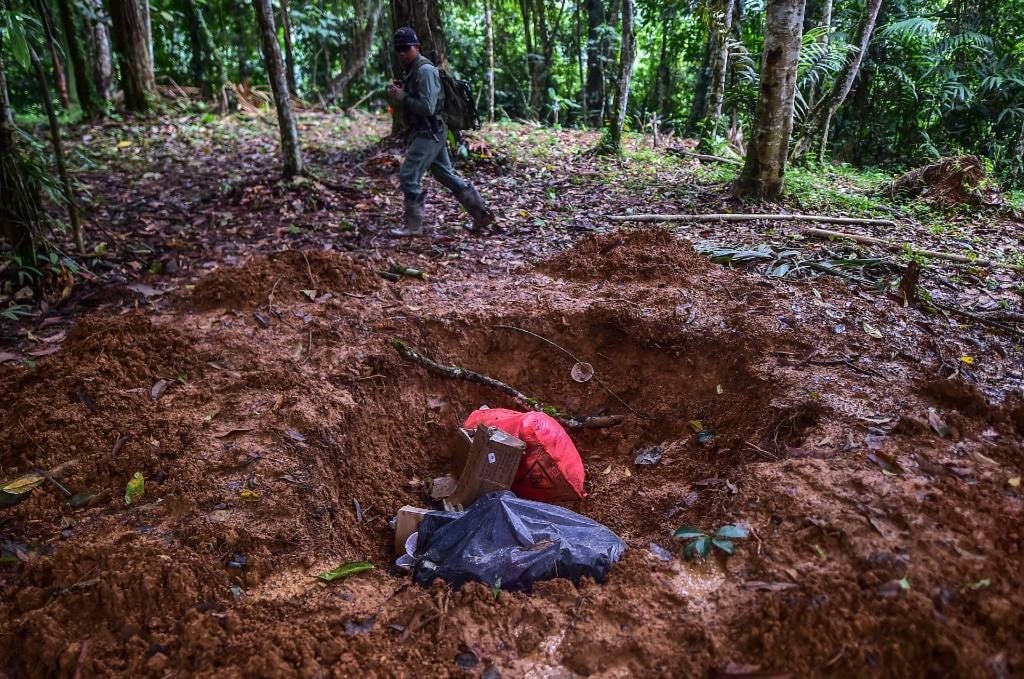 A member of Panama’s Special Police Forces walks by the site where a mass grave was found with the bodies of a pregnant woman, five of her children and a sixth minor killed in a religious sacrifice, in Altos del Terron, Ngabe Bugle region, Panama, on January 20, 2020.

Panama City – Authorities in Panama have discovered a new mass grave in a remote area where in January they found the remains of seven people that police believe were tortured and killed by a religious sect.

Prosecutors said on Monday they believe a different sect is responsible for the new mass grave, however.

The state prosecutor’s office said investigators were supervising the exhumation of skeletal remains from the site in the indigenous Ngabe Bugle region, 350km north of the capital.

“At this time, it is not possible to determine either the sex or the number of people” found in the grave, Azael Tugri, a public prosecutor in the indigenous district of Nurum, told local media.

Tugri said investigators had to hike for 10 hours through mountains to reach the site, near the source of the Chucara River.

Panama’s Aeronaval Service (SENAN) said in a statement the grave was located after a painstaking month-long search.

Pictures of the site released by the prosecutor’s office showed officials in white coveralls digging in the dirt under thick vegetation.

Panama’s TVN-2 channel showed images of what appeared to be bone fragments displayed on a white sheet.

The latest grisly discovery is being linked by investigators to the dismantling last month of a suspected sect and the arrest of its leader, a source close to the investigation told AFP.

SENAN officials linked the grave site to the “alleged rape and mistreatment of minors” by the religious group.

The authority said evidence from the grave had already been sent to a police base in Santiago de Veraguas, 250km southwest of Panama City, for forensic examination.

Authorities have altogether made five arrests in the case, and rescued three minors, a 14 and 10-year-old, as well as a three-month-old baby, according to the prosecutor’s office.

If confirmed, the apparent mass killing would be the second carried out by a sect in the Central American country this year – although authorities say there is no link to the “God’s New Light” sect responsible for the grave discovered in January.

Then, investigators uncovered a mass grave in Altos del Terron – an isolated community in the indigenous region – containing the remains of a pregnant woman and six children aged from one to 17.

The bodies had wounds consistent with being beaten.

Days later Bibles, messages alluding to the devil and a heap of rope could still be seen at the site of the massacre – a makeshift church in dense jungle that was used by the sect.

Police suspected “God’s New Light” leaders were involved in brutal exorcisms, and raided a church used by the sect, arresting 10 people and rescuing 15 others.

Police believe the victims were “tortured and sacrificed” and that the other 15 people would have been, too.

The public prosecutor’s office said later that the 10 suspects had tied up their victims and beat them to death with Bibles, sticks and machetes.

Survivors told them the sect leader claimed he was carrying out God’s orders to “remove the demon” from the victims in a violent exorcism.

Ripple Effect On The Gates Agenda and Why It Matters

I’m Forced to Have a Credit Card

This is the answer: All the lockdowns could be ended NOW if just 4 out of 5 people would wear a mask

California Unveils Lions' Den For Christians Who Sing In Church