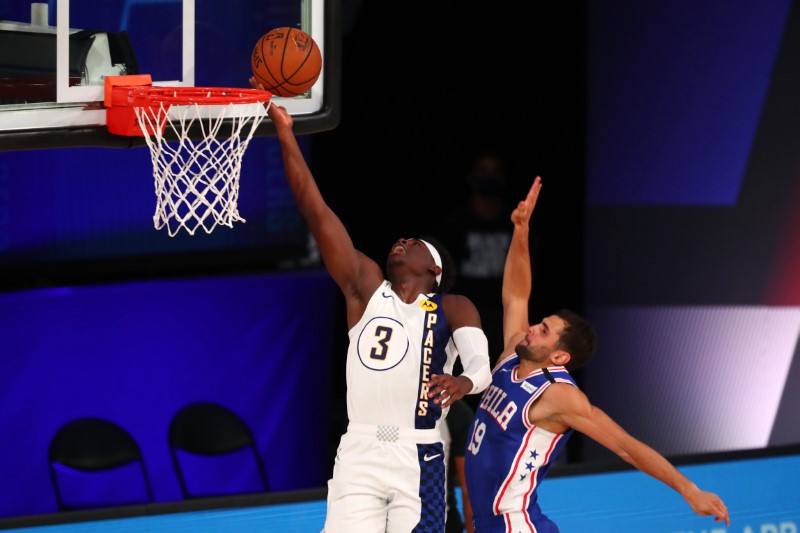 T.J. Warren scored a career-high 53 points to lead the Indiana Pacers past the visiting Philadelphia 76ers 127-121 on Saturday near Orlando.

Aaron Holiday had 15 points and 10 assists, and Victor Oladipo added 15 points for the Pacers, who improved to 40-26 despite playing without key injured players such as Domantas Sabonis and Malcolm Brogdon.

Joel Embiid was spectacular for the Sixers (39-27) with 41 points, 21 rebounds, four assists and three blocked shots. It was his fourth game this season with at least 30 points and 15 rebounds. Tobias Harris scored 30 points, and Ben Simmons added 19 points and 13 rebounds.

Kyle Lowry had 33 points, 14 rebounds and six assists, leading Toronto past Los Angeles for the for the 11th consecutive time.

LeBron James led the Lakers with 20 points and 10 boards. Kyle Kuzma chipped in 16 points, and Anthony Davis managed 14 points on 2-of-7 shooting.

Kelly Olynyk scored all 20 of his points in the fourth quarter, Duncan Robinson scored 17, Goran Dragic had 13 points and Kendrick Nunn added 11 for the Heat (42-24). Miami outscored Denver 69-48 in the second half.

Nikola Jokic had 19 points, seven rebounds and six assists, and Jerami Grant also had 19 points for the short-handed Nuggets (43-23). Denver played without starters Jamal Murray, Gary Harris and Will Barton.

The Clippers (45-21) tied a franchise record for 3-pointers made in a half when they hit 16 of 24 on their way to a 77-45 halftime lead. They were one 3-pointer shy of the NBA record for a first half. They finished 25 of 47, falling short of the Golden State Warriors’ NBA record 27 3-pointers in a game.

The 32-point halftime deficit was the largest in franchise history for the Pelicans (28-38), who saw their playoff hopes continue to fade.

Chris Paul scored 18 points and added seven rebounds and seven assists for the Thunder (41-24). Paul was 5 of 6 from the field in the first half. Steven Adams had 16 points and 11 rebounds.

Biden pushes back his VP announcement another week: Report

CHINA USES TWITTER BOTS TO SPREAD DISINFORMATION QUICKLY: The Epoch Times’ Cathy He lays it out, as …

Coronavirus: for Malaysia’s migrant workers, lack of food is a bigger worry than Covid-19

Should I Ignore My Parents and Sell My New Car?

RED ALERT: 50% COULD BE SICK FOR YEARS AFTER COVID – NEW LOCKDOWNS CLOSE IN CITIES

How to Grow Eggplants in Containers

Six protesters are arrested during violent clash with police in Richmond, VA

National Son’s and Daughter’s Day: History and How to celebrate this day

Should homeowners start shooting back at Black Lives Matter terrorists who violently assault them and their neighbors?