The Facebook video from FishMonster shows a curious vehicle spotted off Florida’s Key West last week, with virtually the only part of it above water is a mast supporting an array of antennae. 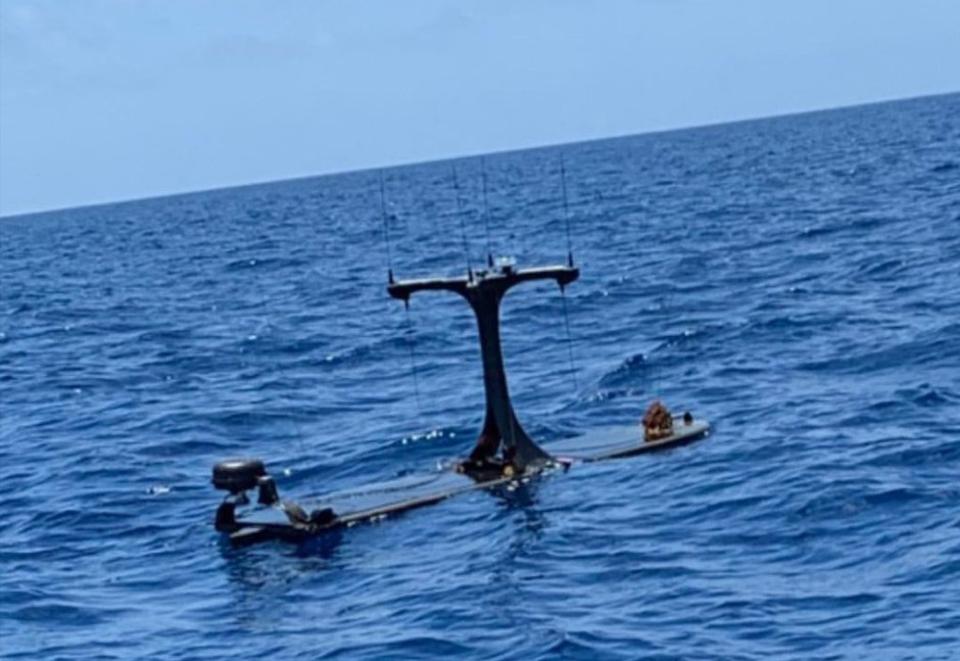 A SHARC spotted off Florida? Picture by Lauren Taylor

The vehicle is almost certainly a Wave Glider made by U.S. company Liquid Robotics (now owned by Boeing BA) , and the antennas suggest it is part of a U.S. Navy program known as Sensor Hosting Autonomous Remote Craft, or SHARC.

The object at first looked like debris — but it is moving under its own power.

On the surface is a ‘float’ like a 10-foot-long surfboard covered in solar cells driving its electronics. This is connected via a tether to an underwater ‘sub’ unit 30 feet below.

As waves move the surfboard up and down, the articulated sub converts up-and-down into forward motion.

Typical speed is just 1.3 knots, but the Wave Glider can keep going indefinitely; in 2013, one made an epic 8,000-mile, year-long journey across the Pacific.

Although they have been used for scientific research, their long endurance and low profile make Wave Gliders ideal for military intelligence gathering, which is likely why Boeing bought makers Liquid Robotics in 2016.

The U.S. Navy has been working with Wave Gliders for many years, showing interest in their potential for hunting submarines. A Wave Glider can loiter for extended periods, towing an underwater sonar array and communicating and contacts to direct aircraft or ships on to a target.

A fleet of low-cost Wave Gliders could sweep slowly across an area of interest, covering a much wider area than a few expensive manned ships.

In 2011 the Navy started equipping their experimental SHARC gliders with the ‘Towed Array Integrated “L”  (TAIL),’ a passive towed acoustic array. This is a set of specialized sensitive hydrophones which take advantage of the glider’s quiet propulsion to pick up distant marine engines. It also gives the acronym SHARC TAIL.

Since then the Navy’s Wave Glider plans have grown more ambitious. Current R&D budget documents show spending of $6 million a year in 2019 and 2020, doubling in 2021 and tailing off with project completion in 2022. SHARC is now part of a wider effort to use autonomous unmanned systems to gather information.

SHARC’s particular role is to

“provide the fleet with a low cost, asymmetric advantage in support of multiple classified missions. This includes persistent, autonomous situational awareness and early warning of submarines or related submarine activity in potential support of TASWO/TRAPS [i.e. Anti-Submarine operations] as well as broad area, clandestine implementation of capabilities that enhance Intelligence Preparation of the Battlefield (IPB) and strike missions.”

Wave Gliders, being acoustically silent and with a low visual and radar signature are stealthy compared to surface vessels. Unlike submarines they continuously feed data back to remote operators.

Current plans call for a fleet of 20 Navy SHARCS to carry out a full-scale demonstration mission in 2021, working together as a co-operative swarm to gather information. Exactly what information is classified.

The SHARCS may be gathering signals intelligence, eavesdropping on communications and detecting radar emissions – hence the need for all those antennae – but they may be doing much more.

However, the U.S. is not the only one with this technology. Back in 2016 I noted a near-identical copy of the Wave Glider called Fugu being tested by the Russian Navy.

So, while it is most likely one of ours, the device seen 15 miles off Key West might just be one of theirs. It would not be the first time unmanned water craft were used for spying.

More spy and army news on Strange Sounds and Steve Quayle. Now if you are looking for supplements to increase your healthy lifestyle and sexlife please visit Natural Health Source. Thank you for your support! [Forbes]

The IDP Crisis: The Most Vulnerable Among The Vulnerable

Frigid Pluto began as a warm place with an underground ocean, study suggests

MASSIVE GOLD SHORT SQUEEZE: “There Is No Escape For Them (The Gold Shorts)”

WE FOUND A POSSIBLE SHOOTER

Reciprocity Can Cure Our Ills with China

A Global Magnetic Anomaly Was Recorded Across the World From the U.S. to China and Antarctica on June 23rd – And That’s Very Weird During the Deepest Solar Minimum in a Century!

Axe to fall on 6000 Qantas workers

Why the U.S. Dollar May Soon Collapse