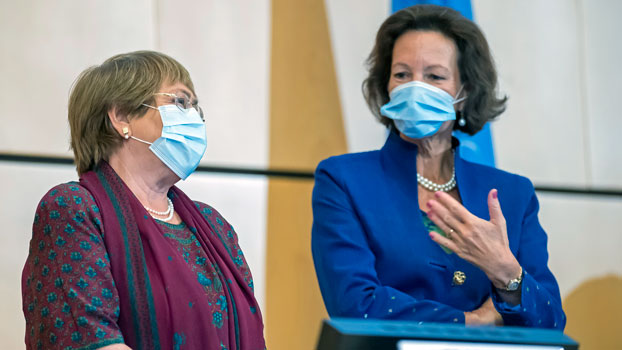 Myanmar on Tuesday rejected concerns raised by the top U.N. human rights official about recent government actions in Rakhine state, saying there had been no effort to destroy evidence of the military campaign that drove 740,000 Rohingya Muslims into neighboring Bangladesh in 2017.

Michelle Bachelet, the U.N. high commissioner for human rights, told the Human Rights Council in Geneva on Monday that Myanmar had made little progress in investigating and achieving accountability for the “terrible human rights crisis” created three years ago by military operations in Rakhine.

“The situation of many hundreds of thousands of Rohingya refugees and internally displaced people remains unresolved,” she said. Bachelet had presented a report to the Council that detailed “conduct which may constitute war crimes and crimes against humanity.”

Bachelet pointed out reports that government administrators have reclassified areas in Rakhine state where Rohingyas once lived, removing the village names from maps — raising concern that evidence from the 2017 military operations is being destroyed.

“This should end immediately, and the prior situation should be restored,” she said, warning that the policy “could prevent Rohingyas from returning to their homes.”

“I am also concerned that they risk destroying evidence relevant to determining legal responsibility for acts committed during military operations both before and after 2017,” said Bachelet.

“Even if there have been crimes committed, those who changed the village names and built new structures did not do it intentionally as they have been accused of doing,” he said.

“They didn’t intend to destroy the evidence and prevent them [the Rohingya] from returning.”

The report Bachelet presented to the Council on Monday cast doubt about Myanmar’s pledges to hold military personnel accountable for their actions in Rakhine, noting that there has been little movement beyond the sentencing of a few soldiers and officers found guilty of atrocities during courts-martial.

While a U.N.-backed Independent International Fact-Finding Mission (FFM) on Myanmar found signs of genocidal intent in the 2017 mass expulsions, Myanmar’s domestic Independent Commission of Enquiry (ICOE) said that war crimes and serious human rights violations had occurred in Rakhine but did not have genocidal intent.

Following the announcement of a court-martial for some 2017 killings in Rakhine, Myanmar military spokesman Major General Zaw Min Tun said Monday that investigations are being conducted in line with recommendations from the ICOE report, produced by the panel the Myanmar government set up in 2017.

“We are now releasing this statement to announce which organization is doing what kinds of investigations following our announcement in July,” he said.

“I cannot give any details on how far the investigation has progressed,” he added. “We are trying to hold a trial before a military tribunal before the end of 2020.”

The military issued a statement in the military-run Myawady Daily newspaper on Monday that the findings of a court of inquiry it set up in July will result in a court-martial, expected to be begin before the end of the year.

A court headed by led by Major General Myat Kyaw examined alleged violations against the Rohingya in Chut Pyin and Maung Nu villages in Rakhine’s Maungdaw township during the crackdown in 2017.

The ICOE’s report issued in January cited killings that had taken place in the two villages, where about 300 civilians are believed to have died at the hands of soldiers during “clearance operations.”

The Office of the Judge Advocate General now will investigate “possible wider patterns of violations” in northern Rakhine in 2016-2017 based on the findings in the ICOE’s report, the statement in Myawady Daily said.

Allegations regarding Taung Bazar village in neighboring Buthidaung township are included in the scope of the Maung Nu investigation, it said

The military expects to hold the court-martial before the end of the year.

The two soldiers’ confessions had been recorded by the rebel Arakan Army and obtained by Fortify Rights.

‘No one will say anything’

Maungdaw township residents said no one has been summoned for questioning by the military yet, but if they are, it would be difficult for them to testify about what happened in the communities.

“Even if they asked the civilians here to come for interrogations, no one would dare say anything against the government. They all fear it,” said one local who declined to be identified out of fear for his safety.

“No one will say anything that will upset the government,” he added.

Other residents indicated that they would feel comfortable speaking freely only if an independent investigative commission led by international organizations probed the allegations.

“The investigations need to gain the trust of the people and credibility from the international community,” said Nickey Diamond, an activist with Fortify Rights.

“If the military is conducting the investigation exclusively, it will not have international credibility,” he said. “It needs to work with independent human rights groups and domestic and international media to gain credibility.”

Nandar Hla Myint, a spokesman for the opposition Union Solidarity and Development (USDP) said the government is handling the Rohingya issue the wrong way and that it should not bow to international pressure.

“We need to tell the truth to the world about what’s happening on the ground,” he said. “We have to tell them firmly. We should not be weak on an issue like this.”

Libya’s Sarraj Calls It Quits, Opening Door For All Scenarios

Americans Are CONSTANTLY BOMBARDED With Propaganda

Bangladesh Protests Movement of Myanmar Troops Near its Border

Ivanka Trump Says She’ll “Take The Vaccine” on The View

What Impact Could Trump’s Reduction of US Troops in Iraq Have?

Cambodia Slams US Sanctions on Chinese Developer as Attack on Sovereignty

Time is Running Out: Australia Secures a COVID Vaccine Deal With Big Pharma