The US Secretary of State was meeting his UK counterpart when he made the comments on Wednesday. Standing alongside UK Foreign Secretary Dominic Raab, when asked about fears the UK is breaking its obligations under international law over Boris Johnson’s latest Brexit move, Mr Pompeo said: “We trust the United Kingdom. I am confident they will get this right.

“We have made clear the importance of the Good Friday Agreement.

“We know the complexities of the situation.

“We have done what we can to provide assistance where we can.

“In the end this will be a decision for the UK to make and I have great confidence that they will get this right.” 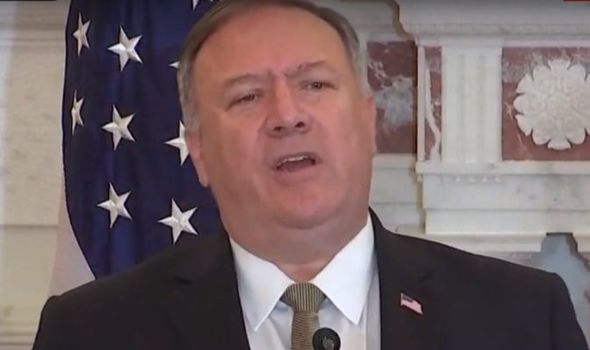 The US Secretary of State’s comments come as senior Democrats in the US Congress have warned Boris Johnson that Washington will not support any free trade pact with the UK if Britain fails to uphold its commitments to Northern Ireland as part of Brexit.

Four US congressmen, led by chairman of the House Foreign Affairs Committee Eliot Engel, have written to Mr Johnson urging the Government to respect its open border and peace process with Northern Ireland.

The congressmen wrote: “Many in the United States and in Congress consider the issues of the Good Friday Agreement and a potential US-UK Free Trade Agreement inextricably linked.

“With the issues raised in this letter in mind, we therefore urge you to abandon any and all legally questionable and unfair efforts to flout the Northern Ireland protocol of the Withdrawal Agreement and look to ensure that Brexit negotiations do not undermine the decades of progress to bring peace to Northern Ireland and future options for the bilateral relationship between our two countries.”

The letter, which was also signed by Mr Engel’s fellow Democrats Richard Neal and William Keating as well as Republican Peter King, comes less than a week after Nancy Pelosi said there would be “absolutely no chance” of a US/UK trade deal if Mr Johnson overrides the Brexit deal with Brussels.

Addiontially, Boris Johnson has been warned domestically regarding breaking international law in the House of Commons.

On Monday, Ed Miliband criticised the Prime Minister and the UK Government for considering breaking “international law” during a House of Commons debate on the controversial Internal Market Bill tabled by the Government.

Critics of the Brexit legislation argue it undermines the UK’s standing on the world stage after an admission last week from Northern Ireland Secretary Brandon Lewis that it would break the law in a “specific and limited way”.

But the Prime Minister maintains the Bill is necessary in order to uphold the UK’s sovereignty.

Mr Miliband said: “I say to the Prime Minister while I have been part of many issues of contention across this dispatch box, I never thought respecting international law would be in my lifetime a matter of disagreement.

“I stood opposite the Prime Minister’s predecessor, David Cameron as leader of the Opposition for five years.”

“I disagree with him profoundly on many issues but I could never have imagined him coming along and saying we are going to legislate to break international law on an agreement we had signed  less than a year earlier as a country.

“That is what this Bill does in the Government’s own words.”

How Far Does the Apple Fall From the Tree?

NeverTrumpers Out of the Closet as Liberal Democrats in Drag

Astronomers Are Uncovering the Magnetic Soul of the Universe

Win or go home for Sounders in MLS is Back

'We need the winds': A plea to push out West Coast wildfire smog

Los Angeles Mayor on California Wildfires: ‘This Is Climate Change’

China Is Now Blocking All Encrypted HTTPS Traffic That Uses TLS 1.3 And ESNI