Michael Gove took Labour’s lockdown demands to task this morning, as he shut them down with a brutal one-word response. Labour MP Kate Green told Sophy Ridge this morning that the party supports a national circuit-breaker, adding: “We have to try something different.” When Ridge questioned whether a national two-week circuit-breaker was on the cards, Mr Gove bluntly responded: “No.”

Mr Gove said: “It would seem to me an error to try to impose on every part of the country the same level of restriction when we know the disease is spreading more intensively and quicker in some parts of the country.

“The nature of the spread of the disease is different in this wave than it was earlier this year.

“It seems to be wrong to impose restrictions on economic and personal lives in parts of the country where the disease is not spreading intensely.”

He went on to criticise Sir Keir Starmer for his latest demand for the circuit-breaker, saying the Labour leader appears to “take a position whenever it suits him”.

JUST IN: Labour exposed for trying to ‘have cake and eat it’ with Covid demands 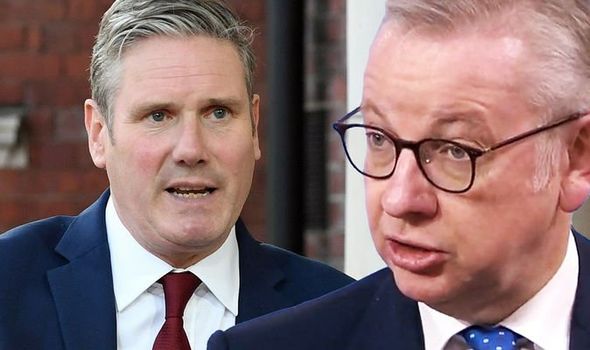 Gove took Labour’s lockdown demands to task this morning, as he shut them down with a single word (Image: SKY•GETTY)

Ridge questioned whether a national two-week circuit-breaker was on the cards (Image: SKY NEWS)

“People will ask why he is calling for this lockdown now when his own mayor in Greater Manchester is fighting against this measures?

“If Labour are serious about the NHS, then Keir would be calling up Andy Burnham and inviting him to accept the need for these measures.”

Earlier this week, Labour leader Sir Keir hit out at the Government’s lockdown strategy as he called for a circuit-breaker in England of two to three weeks.

Gove went on to criticise Keir Starmer for his latest demand for the circuit-breaker (Image: SKY NEWS)

Sir Keir said the circuit-breaker would mean that “all pubs, bars and restaurants would be closed” and compensated “so that no business loses out because of the sacrifices we all need to make”.

He said the current measures were not working and another course was needed to prevent a “sleepwalk into a bleak winter”.

Michael Gove also used the interview to accuse Andy Burnham of “press conferences and posturing” in the row over tougher coronavirus restrictions for Greater Manchester.

Mr Gove said: “Instead of press conferences and posturing what we need is action to save people’s lives.”

A group of Tory MPs have urged Greater Manchester’s mayor to “engage” with the government’s regional approach to restrictions.

In a letter to Andy Burnham and Labour leader Sir Keir Starmer, the 20 Conservatives MPs said a national lockdown would impose “severe costs” on areas with low transmission.

The top 5 takeaways from the first meeting of the FDA's expert vaccine group, including plans for vetting, distributing, and tracking COVID-19 vaccines

HORROR: Inside Look At Life In ICU Bubble At South Florida Hospital…

H.R. McMaster: “There Is a Strange Tendency in the U.S. to Hold Trump Responsible for All Evil”

A Fast Way to Get Stronger in the Bench Press!

The Price to Pay: Trump Virtually Ties Biden in Minnesota

Untangling the Media Myths of Covid-19