The wooden statue had a round face, with wonky facial features and a very long chin.

After the original sculpture was torched, the US artist Brad Downey was asked to recreate the figure in bronze which was unveiled on Tuesday.

A plaque next to Ms Trump’s statue reads: “Dedicated to the eternal memory of a monument to Melania which stood at this location.”

But the sculpture sent social media users into meltdown as they branded the figure as “disturbing” and “hilarious”.

One user said: “Disturbing and resembles nothing found in nature. Nailed it.” 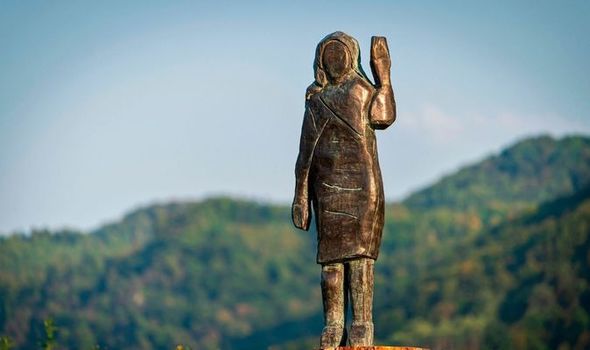 While another wrote: “Am I the only one that finds this ‘statue’ of Melania Trump absolutely hilarious?”

Some social media users took to Twitter to sarcastically say the sculpture is a perfect match for Ms Trump.

One Twitter user said: “The statue exudes the same warmth.”

While one user tweeted: “Still has more personality than the real thing.”

Reacting to the new statute, one Reddit user posted: “Just as hideous as the first one. What an ‘honour’.”

But some fans of Ms Trump showed their support for the First Lady.

On fan wrote on Twitter: “She is stunning…And worthy of a beautiful statue.”

Some social media users have said the art has a striking resemblance to a spoilt restoration of the Spanish masterpiece “Ecce Homo” which was later renamed “Monkey Christ”.

The work was originally painted in 1930 and portrayed Jesus’ face.

But the parishioner painted the face blurrily as critics branded the revamp as a cross between a potato and a monkey.

Comparing Ms Trump’s figure which the botched Spanish painting, one Twitter user sarcastically posted: “Scarily realistic … they’ve caught her personality and the way the eyes follow you around the room.

“It’s a masterpiece, this is obviously where they got their inspiration.”

Twitter users said the statue has a striking resemblance to a spoilt restoration of “Ecce Homo” (Image: Twitter/jwsal)

Another Twitter user compared the two artworks and said: “This Melania Trump statue reminds me of something…”

But it is not the first time a statue of a high-profile figure has received criticism from fans.

In 2017, fans of Cristiano Ronaldo were left in hysterics after a bust of the footballer was unveiled in Madeira Airport, Portugal.

It was revealed as part of a ceremony to name the airport after him in Mr Ronaldo’s native region.

The statue’s artist Emanuel Santos insisted Ms Ronaldo’s sculpture was “a matter of taste” after fans were left reeling.

Report: Flynn Was Targeted Because He Knew Brennan and Co Were Spending Billions off Books

'Our Irish island is the last stop before America'

Barna President: 1 in 5 Churches May Shut Their Doors Because of the Pandemic

Cuomo lashes out after Trump intends to defund NYC

Rasmussen Poll: Only 2 in 10 Support “Defund the Police”

RED ALERT: 50% COULD BE SICK FOR YEARS AFTER COVID – NEW LOCKDOWNS CLOSE IN CITIES

Hate Crime Laws are Pointless & When to Slap a Woman? – Hasty Headlines

Patriotism vs. Globalism in 2020: A Country Is at Stake