The Duchess of Sussex and Prince Harry posed for their first official picture since stepping down from the Royal Family. The picture was posted ahead of the couple’s appearance on TIME100 Talks this Tuesday. Part of Meghan’s ensemble includes a heart-warming throwback to Harry’s mum Princess Diana.

The Sun calculated The Duchess’ entire ensemble in the picture is worth around £300,000.

Meghan is seen re-wearing a £1,820 Alexander McQueen suit in the snap.

The two-piece black suit made its debut appearance in 2018, when the Duchess made her first royal appearance for the Endeavour Awards.

READ MORE: Meghan Markle is the ‘intellectual match’ of Prince Philip with an ‘equal work ethic’ 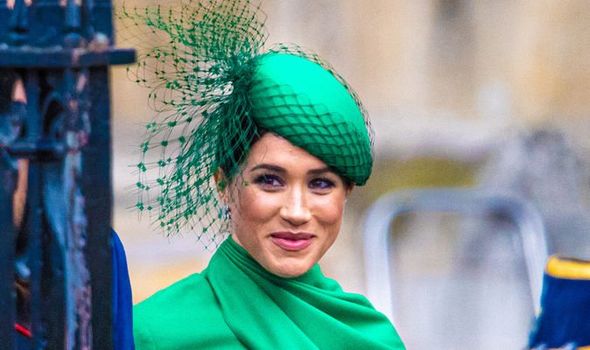 The Princess was gifted the Cartier piece for her 21st birthday by her father John Spencer.

Meghan admitted to loving Cariter, saying in 2017 she splurged a Suits pay check on a French Tank watch and adding: “I had it engraved on the back, ‘To M.M. From M.M.’ and I plan to give it to my daughter one day.

“That’s what makes pieces special, the connection you have to them.”

Meghan Markle news: The photo is the first official image of the Sussexes since stepping down from the Royal Family (Image: EXPRESS)

Other pieces spotlighted on the Duchess included Harry’s £75,000 Aquamarine ring, which she wore on her wedding day.

More Cartier jewellery also was sported by Meghan, with a £6,000 ‘love’ bracelet which can only be unlocked with a screwdriver.

Meghan also sported her trilogy engagement designed by Harry, which is worth an estimated £271,000.

The Duchess ended up getting the ring redesigned with diamonds, and said: “Everything about Harry’s thoughtfulness and the inclusion of [Princess Diana’s stones] and obviously not being able to meet his mom, it’s so important to me to know that she’s a part of this with us.

“It’s incredibly special to be able to have this, which sort of links where you come from and Botswana, which is important to us. It’s perfect.”

The couple’s appearance for TIME100 will focus on “engineering a better world”, with the couple taking an emphasis on “on building online communities that are trustworthy, safer, and more equitable—and what that means for supporting and accelerating progress on critical issues like gender equity, racial justice, and climate change.”

TIME said of the couple’s appearance: “The Duke and Duchess of Sussex, both TIME100 alumni, are among the most influential voices in the world.

“We look forward to working with them to elevate essential voices and highlight real solutions to some of the most pressing issues of our time.”

Meghan Markle news: The couple have previously spoken on TIME about the US election (Image: TIME)

Meghan was featured in TIME’s 100 list, being hailed as one of the most influential people in 2018.

Priyanka Chopra said of the Duchess: “With her, what you see is real, and what you get is a relatable young woman with her heart and mind in the right place.

“Her compassion, evident in the causes she supports, and her drive to break down stereotypes—obvious in her actions—will connect her to a generation in much need of kindness.”

The Covid novels are arriving. And they’ll be a warning to future generations | Laura Spinney

News24.com | US elections: Trump and Biden rally in Florida, showing off contrasting styles

Xiaomi's wireless charger 'can fully charge a phone in 19 minutes'

Dog kicks owner: Pet 'kicks away' bride after being held by the groom while posing for wedding photo

Moment daredevil jumps out of a plane at 13,000ft riding an inflatable pool ring

Pelosi 'optimistic' of stimulus deal with the White House before the weekend. 'Both sides are serious about finding a compromise.'