In a recent Zoom call to celebrate the first anniversary of her Smart Works patronage in the UK, Meghan sat in front of a framed black-and-white print which many viewers took as a sign of her love for her home state. The picture, which could be seen resting on a stone mantle, is the sheet music cover for California’s official state anthem, “I Love You, California”.

A California grizzly bear could be seen clutching the state of California – where Meghan was born and raised.

The song’s lyrics focus on a deep love for the coastal state.

The song begins: “I love you, California, you’re the greatest state of all/I love you in the winter, summer, spring and in the fall/I love your fertile valleys; your dear mountains I adore/I love your grand old ocean and I love her rugged shore.”

The Duchess of Sussex beamed at the camera as she sat in the comfort of her new mansion in the sunny state. 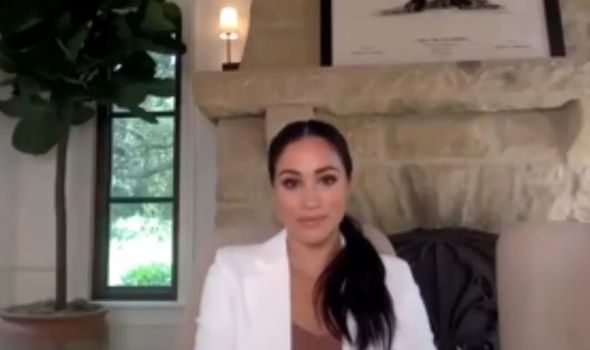 Meghan sat behind a framed picture of the ‘I love you California’ cover (Image: Zoom)

Meghan and Harry are settling into Santa Barbara (Image: GETTY)

A house plant could be seen in the bright room which looked out onto a garden.

Meghan and Harry moved to Santa Barbara earlier in the summer with their one-year-old son Archie.

They had been staying in the LA area since mid-March.

The couple’s new home in Montecito is estimated to have cost a staggering £11million.

The Sussexes have been living in California since March (Image: GETTY)

The family home is styled as a traditional Mediterranean villa.

Reports suggest it was built in 2003 and includes “a trove of beige and off-white décor”.

The house is home to a library, gym, arcade, game room and home theatres.

The couple live in Santa Barbara with Archie (Image: GETTY)

When Harry and his American-born wife are feeling in the mood to chill, they can relax in separate wet and dry saunas.

The house is also equipped with an elevator which takes guests from floor to floor.

The mansion is set apart from a guesthouse which features two bedrooms and bathrooms.

The event at the John Lewis flagship store in Oxford Street marked her official return from maternity leave.

The mother-of-one collaborated with her fashion pas Misha Nonoo to bring the collection known as Smart Set to stores.

Meghan helped design a range of workwear essentials for women.

When shoppers buy an item the same piece is donated to Smart Works.

Meghan and Harry are moving on from royal life (Image: GETTY)

The UK-based group aims to help women back into the work environment by offering them interview training and clothing.

The organisation said Meghan’s offer of help showed “her commitment to helping those in need across the UK”.

Meghan visited the centres on a number of occasions where she offered tips to women preparing for interviews.

Trump speaks to press before heading to Minnesota

DO THESE THINGS TO ELIMINATE WEEDS IN THE GARDEN!

Save The Babies: The Lila Rose Interview

What it’s like to manufacture toilet paper during a pandemic

Mass jailbreak in Afghanistan as IS fighters battle Afghan forces

FBI director: China is 'greatest threat' to US