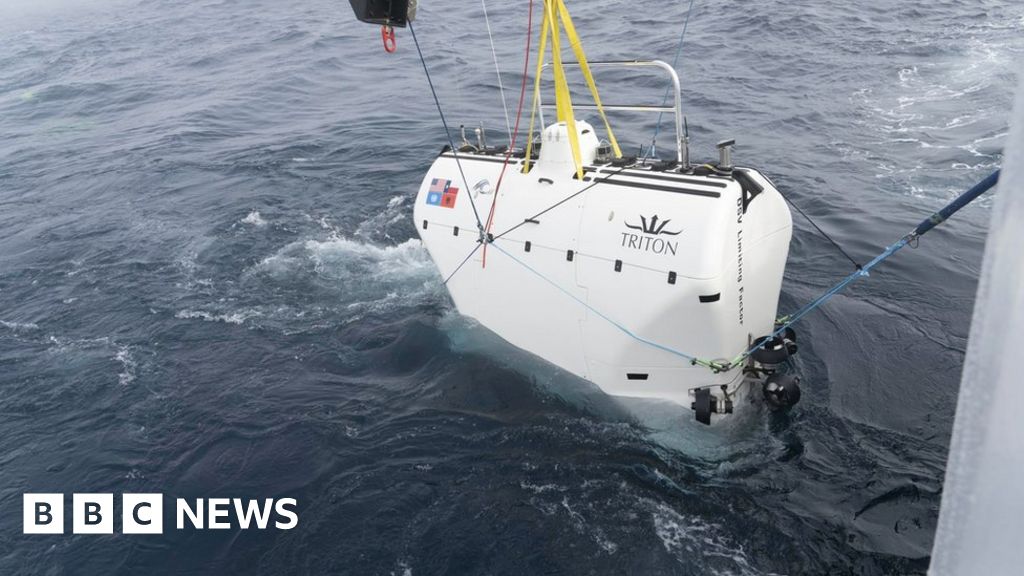 It used to be said that more people had walked on the surface of the Moon than had dived to the deepest part of Earth’s oceans. Not anymore.

Kelly Walsh, the son the great ocean explorer Don Walsh, has just descended to the bottom of the Mariana Trench, almost 11km down in the Pacific.

He made the dive 60 years after his father created history in doing so.

It means Kelly is the 12th person to visit the trench floor – the same as the number of Apollo moonwalkers.

The hours’ long dive on Saturday saw him reach a depth of approximately 10,925m.

The descent was piloted by the financier and adventurer Victor Vescovo. The Texan is conducting a series of dives into the lowest point of the Mariana Trench known as the Challenger Deep.

Mr Vescovo has acquired a support ship and human-rated submersible that he is using to survey several of the most extreme places on the ocean floor.

Recent passengers who’ve gone down with him to the Challenger Deep include the first women to make the journey – the former Nasa astronaut Kathy Sullivan and the British-American mountaineer Vanessa O’Brien.

But Kelly Walsh’s descent is particularly noteworthy because of his father, Don. On 23 January, 1960, the then US Navy officer, accompanied by Swiss national Jacques Piccard, made the first crewed dive to the floor of Earth’s deepest ocean trench using the bathyscaphe Trieste.

It was an astonishing achievement given the precarious nature of the expedition. The trench is so deep, it would be possible to fit Mount Everest (8,848m) inside it and still have more than 2km of water above the peak. The pressure at the trench floor is crushing – some 100 million pascals, almost 16,000 pounds per square inch.

Sixty years on, modern technology means Victor Vescovo can reliably make very safe, repeat dives, so much so that he himself has now been down seven times in his submersible, the 12-tonne Deep Sea Vehicle (DSV) Limiting Factor.

The Scottish marine biologist Alan Jamieson is one of the 12 who’ve made the dive to the bottom of the Mariana Trench. He went with Mr Vescovo to a slightly shallower (10,700m) location just to the east of Challenger Deep known as the Sirena Deep.

Of Kelly Walsh’s dive, he said: “It’s a commemoration of what his father did. It’s also a kind of demonstration that we haven’t lost that capability. People often ask why we don’t seem able at the moment to go to the Moon having done it in the 60s and 70s. Likewise, with the deep ocean, Don Walsh went to the bottom of the Mariana Trench and then for several decades we didn’t go anymore. But now we’re showing we can do it again, and we’re doing it loads.”

Dr Jamieson is in the process of joining up with Mr Vescovo’s expedition. There’s a plan to take the DSV Limiting Factor shortly to the Philippine Trench, which in terms of depth at 10,500m is third only to the Mariana and Tonga trenches.

But it’s a highly significant location in the history of ocean exploration, explained Dr Jon Copley from the University of Southampton.

It’s where the Danish Galathea expedition in 1951 trawled animals from more than 10km down. It was the first proof that higher animals could live deeper than 10,000m, he told BBC News.

Victor Vescovo’s expedition can be followed on the Caladan Oceanic website. Dr Copley keeps a history of ocean exploration on his blog.

SECOND WAVE… WHAT TO EXPECT AND HOW TO PREPARE??

The Clown Cars Are Fully Loaded And Dr. Fauci’s Is Leading The Parade

The Coming Eviction Crisis: ‘It’s Hard to Pay the Bills on Nothing’

Do you have a grocery store run on your to-do list this week? Be sure to check out these 12 tips from @US_FDA on steps you can take to stay safe and protect those around you when shopping and bringing your groceries home. https://www.youtube.com/watch?v=3TtHg5XgZzI …pic.twitter.com/LT8eTvZIcc

Father of Parkland shooting victim to speak at RNC

Will the Fed Save the Dollar or Save the Economy? – Robert Kiyosaki Quarantine Updates