The French President is pushing hard for eurocrats to open legal proceedings against Britain over an alleged breach of the Withdrawal treaty, sources said. Hardliners in Paris were warned to be more cautious because a European Court of Justice case could easily blow up the trade talks. This comes after EU lawyers prepared plans to haul Boris Johnson in front of its Luxembourg-based judges in a bid to force the Prime Minister to scrap his Internal Market Bill.

Michel Barnier said the threat of legal action should remain on the table but used at an “appropriate time”.

In a private Brussels meeting, the Frenchman vowed to “keep clam and carry on” with the trade talks.

He said a deal was within reach and could be ready to be reviewed by EU leaders at a summit in the Belgian capital on October 15.

The UK’s historic free-trade agreement with Japan, provisionally signed last week, has offered the bloc a glimmer of hope. 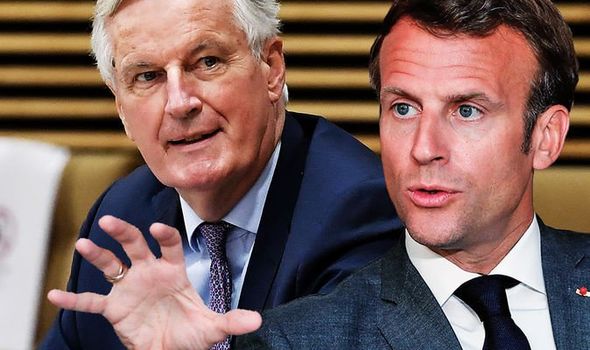 France has been urged to lower its anti-British rhetoric to avoid crashing Brexit talks (Image: GETTY)

Mr Barnier said the level-playing field provisions agreed with Tokyo by the Government were more stringent than those being demanded by Brussels in the post-Brexit talks.

But European ambassadors warned the bureaucrat to toughen his public rhetoric to counter recent outbursts by Mr Johnson.

The bloc is furious at accusations it has threatened a food blockade on Northern Ireland as part of the talks.

An EU source said: “This was seen as a sign of how low the UK was prepared to go.”

Michel Barnier believes a deal is within reach (Image: GETTY)

One delegation said the UK Government was a master of disseminating fake news and the EU had to be prepared to counter those messages.

They added: “There was a lot of dismay at UK spin and in particular over the food blockades but also an awareness of how good the British are at picking fights that play well to the public.”

European leaders expressed the need to remain at the negotiating table even as the chances of a no deal Brexit increase dramatically.

It was also suggested by Mr Barnier the UK Government had dramatically shifted its position to cover-up its failed handling of the coronavirus pandemic.

A UK source close to the negotiations said: “Our position has been clear since February. We’ve consistently said we want a deal like Canada and have said the same thing in the negotiating as outside.

“So this is really grasping and totally wide of the mark.”

The Uncertain Expansion of the G7

Into Tibet Vlog I: Beard brothers take their first breath of Tibetan air

Reasons For Tomato Leaf Curl That are No Cause for Concern

Protesters try to silence black tour guide defending Lincoln statue in DC & chase away journalist: ‘Get out of our city!’

Dove Cameron Took Three Quizzes To Find Out Which “Office” Character, “Clueless” Character, And Pop Diva She Is