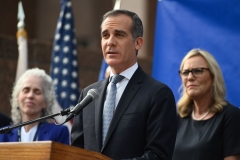 (CNSNews.com) – Los Angeles Mayor Eric Garcetti criticized President Donald Trump’s response to wildfires in California, accusing him of putting partisanship above leadership even though he declared emergency aid for the state three weeks ago.

While Garcetti praised federal agencies for their “great cooperation” with the wildfires and COVID-19, he said Trump’s help seems to be based on politics.

“I think leadership at the very top needs to be earlier, stronger, and from the president. I wish that we would get as much attention, not based on an electoral map, but just purely on being Americans and the need for leadership to be from the White House for all of America, you know, whether it’s twin hurricanes on the Gulf Coast or fires here on the West Coast,” the mayor said in an interview with CNN”s “State of the Union with Jake Tapper” on Sunday.

“We’re one nation, and, sometimes, looking at the leadership that comes out, it’s easy to forget that. It’s taken three weeks. I’m glad he’s coming, but we need much more help. When we have firefighters dying on the line, and Washington refuses to help states and refuses to help local governments that are the first responders to emergencies like this, it’s unconscionable,” Garcetti said.

“So, instead of hitting the golf course or going on vacation, the president and Congress respectively should sit down this week, and finally make sure that there is assistance for these brave men and women who are protecting our lives and protecting our property,” he said.

Tapper asked Garcetti to explain what Trump would have done differently if California were a Republican state, and the CNN host noted that Trump declared California a disaster three weeks ago.

“Absolutely, and I always say that. That’s very important that those agencies respond, we get good coordination, but there’s a refusal to, in a blaming blue states over red states in his mind, I mean, I remind people there’s a million Republicans that live here in the city of Los Angeles. Even if you’re a partisan, you should be stepping up with empathy,” Garcetti said.

“It’s terrible for our coronavirus response, and so we need leadership that is equal across this country, instead of being partisan and divisive, and it’s very clear, this president seems to divide more. He’s going to come out here and probably tell us, I’m going to send you rakes, instead of more help,” he said.

“We need actual help, material help, not based on our party affiliation or how we voted. Leadership isn’t about grudges. It’s about governing for all,” Garcetti added.

After TikTok and WeChat, Alibaba could be the next target in Trump’s tech war

APARTMENT TO 40 ACRES – OUR HOMESTEADING JOURNEY

Does anyone even use bottle openers anymore? (Video)

Conservatives Are Treated like Second-Class Citizens, and That's Dangerous

What Happens When Kids Don’t See Their Peers for Months