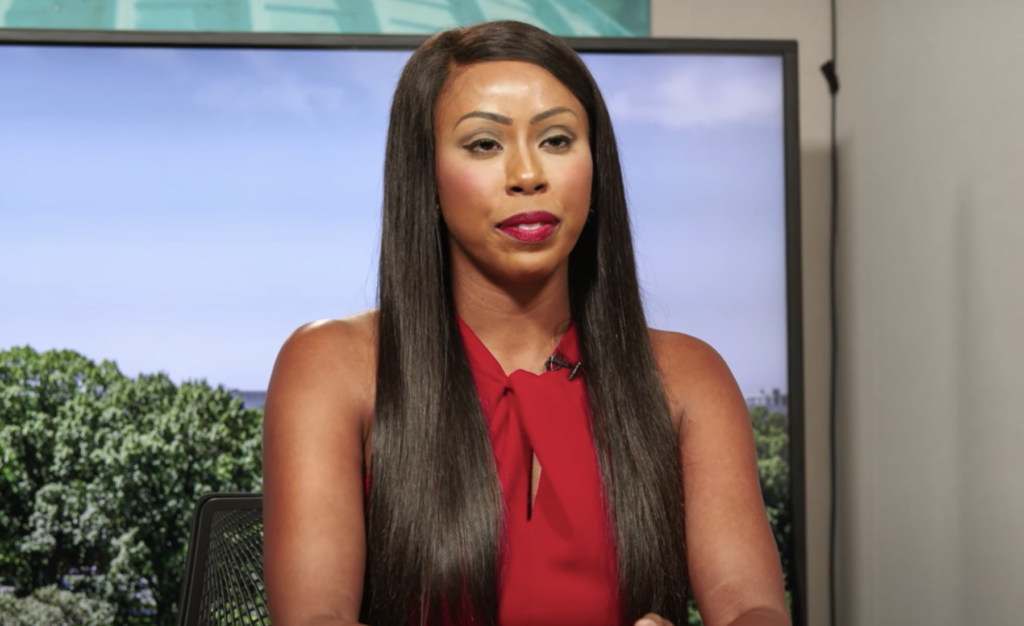 Kim Klacik is a rising Republican star who will lose her race for Congress. It doesn’t matter. I met her briefly at CPAC this last year and she doesn’t strike me as a person who harbors illusions, political or otherwise.

Thus she probably knew from the gitgo that she would lose, but become a star in the process. She was right. Kind of like a GOP version of Beto, but with a brain and a future.

Given star status, she has been able to far outraise her Democrat incumbent opponent, Kwesi Mfume.

Since that ad, Klacik has appeared at the Republican National Convention and made multiple appearances on national television. A Federal Election Commission report filed Thursday night showed her raking in $6,445,451 from July 1 through Sept. 30. The Baltimore Sun, which reported on the filing, quoted Klacik as saying: ‘I think we’ve been fortunate with that viral campaign ad that started the whole thing.’”

RELATED: Kim Klacik On The View: Joy Behar ‘Paraded Around In Blackface’

Kimberly will work with the Trump Administration and we will bring Baltimore back, and fast. Don’t blow it Baltimore, the Democrats have destroyed your city! https://t.co/PDdjgxbIHu

Sign up to receive the latest political news, insight, and commentary delivered directly to your inbox.

With that presidential endorsement of her career, she will either get a nice slot in a second Trump administration or be backed by Trump for another high GOP slot somewhere in the post-Trump party, which will be a party Trump will still have a lot of say in.

Klacik Accused Of Buying The Election

According to the Baltimore Sun, Mfume accused Trump and Klacik of trying to buy the election, saying, “This congressional seat belongs to the people of Baltimore City, Baltimore County and Howard County. Donald Trump and Kim Klacik cannot buy it. They should take their money and greed somewhere else, because we are not for sale. Not now, not ever.”

Of course she is trying to buy the election. So is he. So is anyone running for anything in the United States today. Politics, to mangle Clausewitz, is war by other means. Money is ammo. If you don’t have ammo you can’t shoot and thus can’t win. Ergo…

FNC: “Klacik reported $2.9 million in expenditures, most of which was dedicated to online ads and mailers, as well as $3.6 million in cash on hand. By contrast, Mfume’s cash on hand was reported as $269,342.”

That is a serious disadvantage for Mfume. But it is irrelevant. His name recognition and local voter loyalty, which given the economic conditions in the district are insane, will guarantee a win. Though Klacik could pull off up to 40 percent, a serious moral victory. In September 1939 the Polish Army achieved a serious moral victory against the Wehrmacht. And…

Maryland, aside from its Eastern Shore, is deep red because of Baltimore and the counties close to DC. No amount of star power or money will change that in the foreseeable future. However, it won’t matter to Kim Klacik. She will go on to redder pastures.

READ NEXT: Dems Promote Race Card To Cover Up Their Incompetence In Dealing With Black America

This piece was written by David Kamioner on October 18, 2020. It originally appeared in LifeZette and is used by permission.

The opinions expressed by contributors and/or content partners are their own and do not necessarily reflect the views of The Political Insider.

EUROPEAN to Impose Sanctions on The ussr and Lukashenko

Actually if this BLM AND ANTIFA DONT CHANCE THEIR WAYS, THERES GOING TO BE ENOUGH FED UP CITIZENS THATS NOT GOING TO TAKE THEIR SHIT ANYMORE’ ?????????? https://t.co/4hOhXyHJC7

Thanks, Fox News, for reminding us of the Soros role in creating America’s riot-coddling DAs

The Ballot Box as Pandora’s Box

‘This Is A Nightmare’: FBI Employees Had Concerns About Flynn Probe, Records Show

Why Are INSURGENTS Allowed To TERRORIZE The Public?

Viewership, and the Cowboys, Crash on Monday Night Football

Civilization Won’t Decline: It Will Collapse

Calling Chomsky Out: The Riots Are A Full-Fledged Attack by The Hard Left To Topple American Society