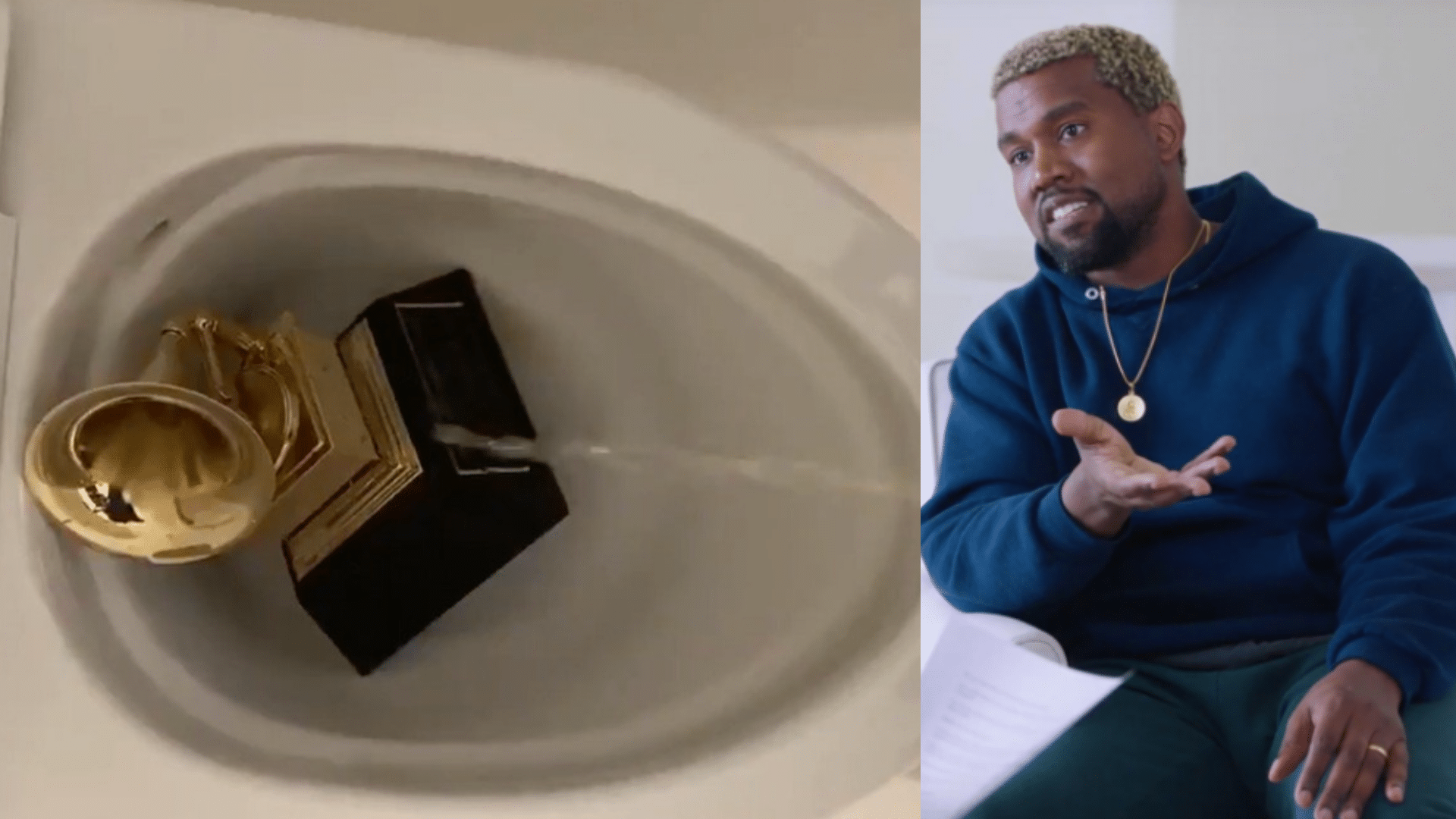 Kanye West makes headlines yet again for another unpredictable and questionable decision in 2020.

The rapper decided to urinate on one of his several Grammy awards. And it’s all documented.

Trust me … I WONT STOP pic.twitter.com/RmVkqrSa4F

West tweeted a video of himself peeing on the award with the caption: “Trust me…I WON’T STOP.” And as usual, the internet has exploded with countless memes and comments on his latest controversial decision.

Over the years, West has secured 21 Grammy awards and that achievement seemingly meant a lot to him in the past. However, it seems as though things have apparently changed since then.

His decision was sparked by his ongoing feud with Universal Music Group and Sony/ATV Music Publishing. West wants the ownership of his master recordings and vows to not release any new music until he is released from any and all contracts.

90% of the record contracts on the planet are still on a royalty A standard record deal is a trap to NEVER have you recoup, and there’s all these hidden costs like the “distribution fees” many labels put in their contracts to make even more money off our work without even trying.

The “Stronger’ rapper insists that he has made billions of dollars from his music and does not have to worry about being kept quiet or negatively impacted by any record label. He went on a tweet ramage and stated that the current music industry is similar to “modern day slavery.” This is before West posted ten separate contracts that he has with Universal. And as a result, he breached any and all nondisclosure agreements.

“Instructed by Kanye West to review numerous contracts” will sound great on my CV pic.twitter.com/YV3Hu8QkzJ

In a tweet afterward, West stated: “When you sign a music deal you sign away your rights. Without the masters you can’t do anything with your own music.”

Can’t wait for these Twitter lawyers to show up and start dissecting Kanye’s contracts pic.twitter.com/6d2zvmfGvs

Both celebrities and fans have made public comments about the shocking video on social media. Songwriter Diane Warren said, “This was given to U by your peers out of respect for your work and U r literally pissing on them. I’ve won one Grammy and I’m forever grateful and humble that my peers found me worthy of it.”

Also…….Don’t ever piss on the people that championed you early in your career.

Kanye west urinating on his Grammy is like a rich man telling a poor man that wealth is vanity.

No artist will listen to him.

In the middle of this madness, the “Heartless” rapper also decided to leak the phone number of the Chief Content Officer at Forbes, who he called a “white supremacist.”

Kanye West has tweeted his confidential contract PAGE BY PAGE, attempted to leak music, asked Drake & Taylor Swift to retweet him, recorded himself pissing on a Grammy, and leaked a Forbes’ editor’s number… all in under an hour lol.

Fans and social media users are almost completely used to Kanye West going on problematic Twitter rants every so often. However, this time is a bit different compared to what we have seen in the past. He has not only called out specific individuals, but he also went as far as urinating on a prestigious award many artists only dream of winning during their lifetime.

West peeing on one of his Grammy awards follows the viral public outburst at his first presidential rally. During a speech to those in attendance, he explained that he “almost killed his daughter” before she was born due to contemplating Kim Kardashian-West, his now wife, getting an abortion. This drew the attention of millions online. This is most likely because that information was never shared or spoken about publicly in the past.

Kanye West: “My Mom saved my life. My Dad wanted to abort me … There would have been no Kanye West … I almost killed my daughter.” pic.twitter.com/wL0ynH0EXT

After the general public became aware of the outburst, West decided to explain to his followers that his life is similar to the movie Get Out. He also claimed that Kim Kardashian-West and her family were attempting to lock him up.

Kim Kardashian responded to his remarks publicly with compassion and explained that Kanye is a “complicated” man who was having a bipolar episode. Most recently, the Kardashian and Jenner family have decided to make the next season of Keeping Up With the Kardashians their last.

Kim Kardashian West acknowledged that her husband Kanye West has been diagnosed with bipolar disorder and said it’s “incredibly complicated and painful” for many to understand. She went on to call him a “brilliant but complicated” person. https://t.co/s1Xf6Ocqf4

This latest Twitter rant involved not only the general public, but also public figures. In a recent series of tweets, West decided to call on Black Americans to claim the ownership of their work and take back their power. He added that “black masters matter” and urged NBA athletes to stand with him regarding this ownership battle. In a shocking plea, he also begged his so-called nemesis Taylor Swift as well as other musicians like Drake and Bono to support him.

Kanye West and Taylor Swift have experienced their fair share of feuds over the past decade. However, ownership of their music is something that they may see eye-to-eye on. In 2019, it came to light that Swift, unfortunately, was not allowed to buy back the rights to her masters from Big Machine Records. Those masters are now owned by Scooter Braun and his company.

taylor after seeing her name on kanye’s tweets pic.twitter.com/cqJXPczFWY

The reactions to Kanye West peeing on one of his Grammy awards have undeniably been mixed. Some social media users are calling his action “disrespectful” and “disgusting,” while others think that he has a point. Many, of course, are taking advantage of this opportunity to make memes and jokes across platforms like Twitter and TikTok.

Kanye picking which Grammy to piss on pic.twitter.com/TPeBpGCdoj

Most recently, Kanye has made claims that his wife Kim Kardashian will be his lawyer when it comes to this matter.

What will Kanye West do next? This fight doesn’t seem as though it’s going to end anytime soon.

Shock And Concern Over ‘This Is Paris’ Documentary

Fred and theComputerNerd01 Bring Their YouTube Personalities to TikTok