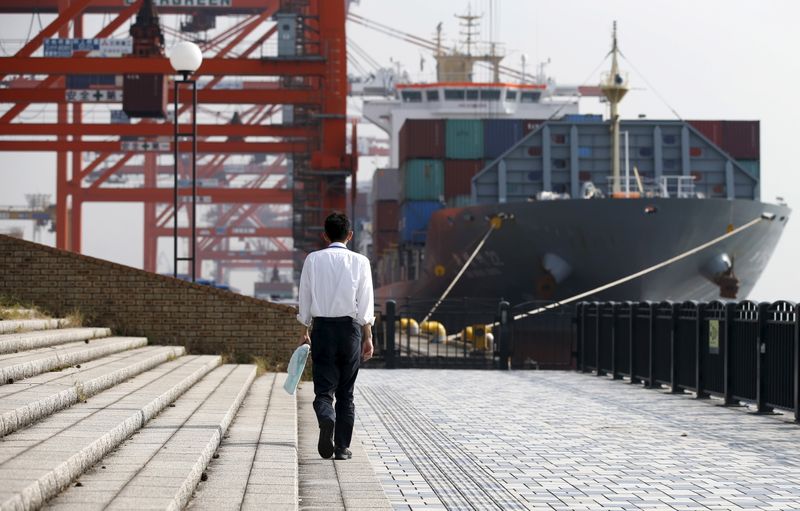 FILE PHOTO: A man walks near a container ship at a port in Tokyo, Japan, October 20, 2015. REUTERS/Toru Hanai

TOKYO/SEOUL (Reuters) – Japan said on Thursday it was disappointed South Korea was proceeding with a complaint to the World Trade Organization, a day after the body set up a panel to rule on curbs imposed by Tokyo on exports of some key technology materials to its neighbour.

“We think it is extremely regrettable that South Korea has not honoured our agreement to resolve the matter through dialogue and communication,” Mitsuhiro Fukuyama, director of the International Legal Affairs Office at Japan’s trade ministry, said.

“Under present situation, it is difficult to have policy dialogue with South Korea.”

Following the ruling, the Japanese government said in July last year it would stop preferential treatment for shipments to South Korea of three materials whose production it dominates and which are used by firms such as Samsung Electronics Co Ltd <005930.KS>.

Curbs on two of the materials – hydrogen fluoride, used as an etching gas in the chipmaking process and fluorinated polyimides, used in smartphone displays – remain in place and exporters need to gain permission for each shipment, which takes around 90 days.

Seoul, which resumed its WTO complaint in June after talks stalled, plans to show Japan’s export restriction measures are “arbitrary and discriminatory” and is urging Tokyo to withdraw the measures as soon as possible.

It usually takes 10 to 13 months for the WTO dispute settlement body to make a final decision, Seoul said.

Japan also this week condemned a statue in South Korea that appears to depict Japan’s prime minister, Shinzo Abe, kneeling and bowing to a seated “comfort woman,” a euphemism for women forced to work in Japan’s wartime brothels.

(Reporting by Hyunjoo Jin in Seoul and Ami Miyazaki in Tokyo; Editing by Edwina Gibbs)

How To Replant A Vegetable Garden In The Summer For A Big Fall Harvest!

80% of parents have new respect for teachers thanks to quarantine

Elon Musk threatens to pull Tesla operations out of California

Time is Running Out for Coronavirus Course Correction

Things are About to get Crazy…