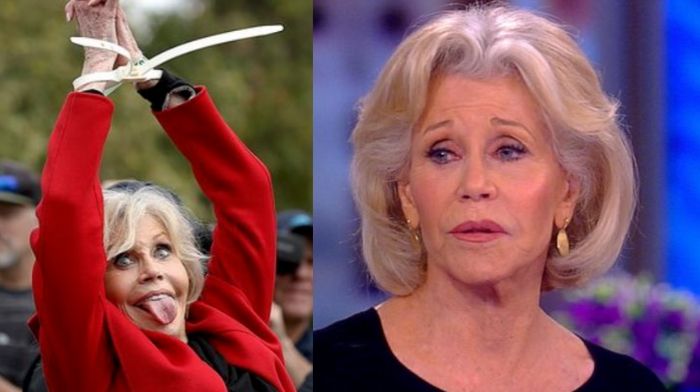 Hollywood actress Jane Fonda used her weekly “Fire Drill Friday” protest, which has been moved to the Internet because of the coronavirus pandemic, to outrageously call for COVID-19 recovery money to be used to fight climate change.

During the protest, Fonda ranted against corporate bailouts during the coronavirus crisis, instead demanding that the federal government allocate recovery money to green or sustainable energy as well as to efforts that create a “level playing field” for workers.

“These historic sums of stimulus money aren’t going to happen again, maybe even during our lifetimes. And where they go and how they are spent will determine so much about what kind of future we have,” said Fonda, 82, according to Breitbart News. “So while we insist on more funding to heal the effects of this pandemic, we must also insist that the money is used to lay the foundation for a clean, sustainable energy future as well as justice and dignity and a level playing field for all workers.”

Fonda kicked off today’s rally by bashing President Donald Trump, accusing his administration of stifling working Americans by trying “to ram through bail outs for the already privileged and the powerful.” She then praised Democrats, who she claims “have fought to include financial aid for workers and small businesses, hospitals…but more, much more needs to be done.”

Of course, this is a blatant lie, as it was congressional Democrats who just blocked aid for small businesses in a Republican-backed initiative that would have created $250 billion in coronavirus-related small-business loans.

Moving on from there, Fonda slammed oil and drilling companies and their leaders. “We have to say ‘no’ to bailouts for corporate executives and oil billionaires and ‘yes’ to immediately protecting the most vulnerable among us,” she said. “Fossil fuel executives don’t give a fuzzy rat’s ass about workers or communities’ well being.”

“Now’s the time to invest in economic relief and stimulus measures that put all workers and families first, not big corporations,” she added.

Fonda has been known for her crazed left-wing activism for decades, going all the way back to her anti-American protests during the Vietnam War, when she was nicknamed “Hanoi Jane.” It seems that some things never change, as she is now gleefully trying to use a pandemic that has killed over 60,000 Americans to force her radical liberal agenda down all of our throats.

This piece was written by PopZette Staff on May 1, 2020. It originally appeared in LifeZette and is used by permission.

Unemployment Claims Soar Over 26 Million Within Five Weeks Amid Pandemic

Getting a party rolling in Japan

The Focus on COVID-19 Is Hurting Other Patients: Dr. Jeffrey A. Singer

Biden Would Shut Down Gun Stores Amid Pandemic, Surrogate Says