Lana Marks, US ambassador to South Africa and longtime friend of Mr Trump, was advised of Iran’s plans, according to Politico. The political journalism outlet mentioned two anonymous sources, one of whom was “familiar with the issue”.

US officials warned that Ms Marks links to the President could have influenced Iran’s decision to target her.

Mr Soleimani was killed on January 3 along with at least 6 others following an air strike carried out by an American drone.

Ever since, Iran has considered several ways of reciprocating the attack.

The top general was largely considered a national hero in Iran. 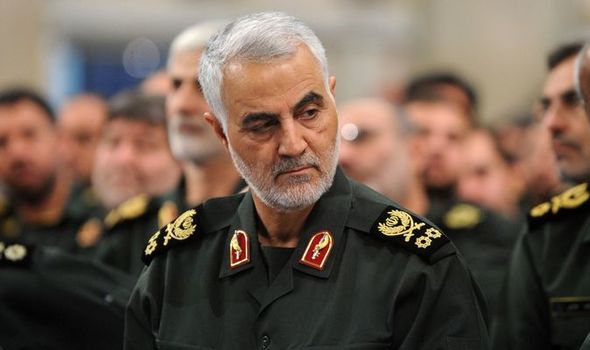 Qasem Soleimani was killed by a US airstrike ordered by US President Donald Trump (Image: Getty)

However, to other countries, the leader of the Quds Force of Iran’s Revolutionary Guards Corps was seen as a powerful threat.

Thought the past two decades western powers as well as Israeli and Arab nations have tried to execute him.

President Trump effectively mandated his assassination citing his “highest” responsibility as “the defence of our nation and its citizens”.

During the televised statement, he said: “Last night, at my direction, the United States military successfully executed a flawless precision strike that killed the number-one terrorist anywhere in the world, Qasem Soleimani.

“Soleimani was plotting imminent and sinister attacks on American diplomats and military personnel, but we caught him in the act and terminated him.”

Mr Trump said that under his administration, the US’ policy would be “unambiguous”.

He added: “To terrorists who harm or intend to harm any American, we will find you; we will eliminate you.

“We will always protect our diplomats, service members, all Americans, and our allies.

DON’T MISS:
China accused of making a ‘mockery of peace’ as it teams up with Iran [UPDATES]
US election shock: China wants Joe Biden to BEAT Trump [REVEALED]
Iran accused of ‘coronavirus cover up’ as true death toll exposed [INSIGHT]

“For years, the Islamic Revolutionary Guard Corps and its ruthless Quds Force – under Soleimani’s leadership – has targeted, injured, and murdered hundreds of American civilians and servicemen.

“The recent attacks on US targets in Iraq, including rocket strikes that killed an American and injured four American servicemen very badly, as well as a violent assault on our embassy in Baghdad, were carried out at the direction of Soleimani.

“Soleimani made the death of innocent people his sick passion, contributing to terrorist plots as far away as New Delhi and London.”

Following the killing of Mr Soleimani, US secretary of state Mike Pompeo expressed his backing of the decision to carry out the attack.

US officials warned that Ms Marks links to the President could have influenced Iran’s plans (Image: Getty)

He said: “If you’re looking for imminence you need to look no further than the days that led up to the strike that was taken against Solemani.

″And then you have what we can clearly see were continuing efforts on behalf of this terrorist to build out a network of campaign activities that were going lead potentially to the death of many more Americans.

“It was the right decision. We got it right. The Department of Defense did excellent work.

“And the president had an entirely legal, appropriate and a basis as well as a decision that fit perfectly within our strategy in how to counter the threat of malign activity from Iran more broadly.”

In 2018, former FBI agent and national security analyst Ali Soufan wrote of Mr Soleimani: “More than anyone else, Soleimani has been responsible for the creation of an arc of influence — which Iran terms its ‘Axis of Resistance’ — extending from the Gulf of Oman through Iraq, Syria, and Lebanon to the eastern shores of the Mediterranean Sea.”

The Good News About COVID-19 the Corporate Media Keeps Hidden

A.O.C. Unleashes a Viral Condemnation of Sexism in Congress

Media Learned Nothing after their 2016 Polling Disaster

How video games are teaching the world to speak English

Who Will Defend Western Civilization?

A Brief History of Legal Tender

Kayleigh McEnany vs. Jim Acosta Is Not A Fair Fight

Coronavirus in Singapore: Election campaigning without the handshakes

Seattle Strikes Down Drug And Prostitution Loitering Laws, Because … Racism

Milton Glaser, designer of ‘I Love NY’ logo, dies at 91

Canada: Man Pepper-Sprayed for not wearing a mask at Tim Hortons