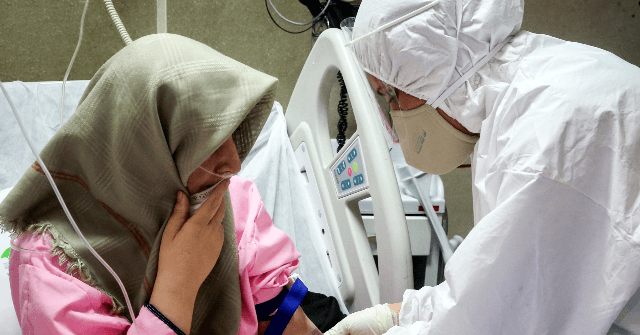 TEHRAN, Iran (AP) — Iran announced Saturday that its death toll from the coronavirus has passed the milestone of 30,000, in what has been the Mideast region’s worst outbreak.

Health Ministry spokeswoman Sima Sadat Lari announced that the total death toll from the outbreak had reached at least 30,123.

She said that 4,721 virus patients are in critical condition.

Iran has been struggling with the coronavirus since announcing its first cases in February, with more than 526,000 confirmed cases to date.

In recent weeks, Iran has seen daily death tolls spike to their highest-ever levels, sparking increasing concern even as government officials continue to resist a total lockdown for fear of cratering the economy, which has been hard-hit by U.S. sanctions.

On Wednesday, Iranian officials announced a travel ban to and from five major cities, including the capital of Tehran and the holy city of Mashhad, that they said aimed to contain the virus’ spread.

The coronavirus has also spread to some of the highest levels of Iran’s government, which includes many older men. Among those recently infected is the head of the country’s atomic energy organization, while Iran’s vice president in charge of budget and planning tested positive on Sunday.

After downplaying the outbreak in its first weeks, Iranian officials have more recently begun to admit the scope of the epidemic within the country.

Deputy Health Minister Iraj Harirchi, who had tested positive for the virus in March after playing down its threat and refuting reports of mass deaths, told state TV on Wednesday that the country’s true death toll is about double the reported figures.

According to officials, there are also large numbers of patients in hospitals being treated as COVID-19 cases but who have not been tested, whose tests came out as false negatives or whose symptoms are not the same as those listed by the World Health Organization and who are therefore not counted in the official case numbers.

Like in many other countries, the spiraling outbreak in Iran reflects the government’s contradictory virus response. This week, as the daily recorded death toll hit the record for three times, authorities announced tighter restrictions for the hard-hit capital of Tehran.

Recently reopened universities and schools, as well as libraries, mosques, cinemas, museums and beauty salons, shut down. In the past week, the government mandated that all Tehran residents wear face masks outdoors and in public places, warning violators would be fined. Officials promised those who tested positive would be closely tracked.

Movement restrictions this spring somewhat checked the spread of the disease. Then the government swiftly reopened the country, desperate to boost its stricken economy. Since June, the case count has steadily increased — and spiked to new heights in recent weeks.

Long before the virus hit, Iran’s economy was ailing, pummeled by U.S. sanctions after the Trump administration’s unilateral withdrawal in 2018 from Tehran’s nuclear accord with world powers. As the death toll soared this week, the nation’s currency plunged to its lowest level ever, following the U.S. administration’s decision last week to blacklist Iranian banks that had so far escaped the bulk of re-imposed American sanctions.

As Iran approaches winter, the seasonal influenza could be an added and serious issue for the country, as it has had purchasing the flu vaccine amid new American sanctions on Iranian banks.

Iran’s Red Crescent Society said in a tweet on Tuesday that they were in charge of importing two million flu vaccine doses into the country, but that new U.S. sanctions prevented the import.

Meanwhile on Saturday, the United Arab Emirates has announced its highest single-day total of new cases of the coronavirus amid a spike in the Gulf nation that is home to Abu Dhabi and Dubai.

The country’s Health Ministry said tests found 1,538 new cases of the virus, pushing the overall number of cases to 114,387.

The ministry said another four people died from the virus, pushing the overall death toll to 459. Overall recoveries are at 106,354.

Recorded infections have soared again in recent weeks, as authorities have relaxed restrictions and resumed schools for in-person instruction. Dubai has reopened its airport for international travelers and embarked on an active campaign promoting itself as a tourism destination amid the pandemic.

The UAE is engaged in an aggressive testing campaign, with over 11 million tests conducted in a country home to over 9 million people.

Joe Biden Said Some Truly Scary Shit in His Calm, Inside Voice

Trump’s Fracking Fixation Is Not Landing in Pennsylvania

Chinese Lawyer Who Reported From Wuhan Detained, 'in Good Health'

Kamala Harris Brags About Boycotting Barrett Vote: 'This Nomination Process Is a Sham'

WHO Changes Mind On COVID-19 Lockdowns, Says They Should Only Be Used as a Last Resort