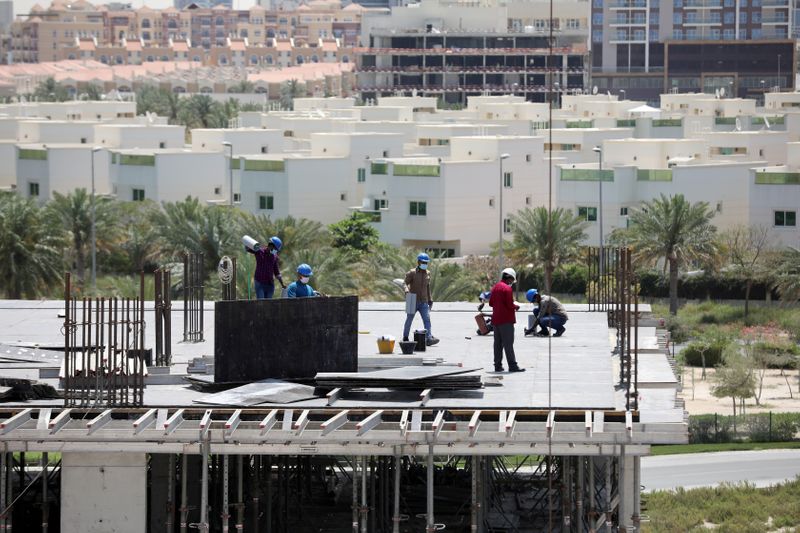 DUBAI (Reuters) – A group of investors is raising concerns about the treatment of migrant workers in the Gulf, warning that labour practices risk leading to abuses such as modern slavery.

The group, led by fund manager CCLA, says it represents 38 investors with over $3 trillion in managed assets and wants companies to disclose how they protect migrant workers.

Such workers, many of them from Asia, provide the backbone of Gulf economies, working in sectors such as construction, hospitality and oil and gas.

The group of investors has written to over 50 international companies operating in the region. It does not imply any wrongdoing by the companies it has written to but said some may be unaware of the risks.

The group is concerned recruitment practices can require low-paid migrant workers to pay large fees to agents and middlemen to obtain employment in the Gulf, it said in a statement.

Those workers often need to take out loans or sign over assets to pay those fees, which may lead them to being in “debt bondage” and at high risk of forced labour and modern slavery, it said.

“As investors, we have a moral duty to ensure that we are not profiting from modern slavery in any shape or form,” CCLA’s Chief Executive Peter Hugh Smith said.

The group also raised concerns about employers withholding migrant workers’ passports and the impact the economic fallout of the COVID-19 pandemic has had on migrant workers.

Shell, Acciona and Vinci said those policies did not allow charging recruitment fees to workers and that they review worker welfare. Wyndham said it was not aware of any malpractice in any of its hotels.

Vinci said it was challenging to guarantee a fair recruitment process in many regions and that the company had to be vigilant to safeguard workers.

Time for US Defense to Break the China Habit

How to raise chickens for meat

What is Kerala’s gold smuggling scam?

Transfonica, owner of O2, in merger talks with Virgin Media

BE PREPARED TO BUG OUT!!! EMERGENCY PREPAREDNESS

Join me in taking action— link in bio for tools to email, call, donate, and sign a petition on his behalf from @justicef…

Do Cabbage Plants Harm Tomato Plants?: Don’t Plant Them Together, The Answer is Yes & Here’s Proof!

End of an era: CHOP finally dismantled by Seattle police