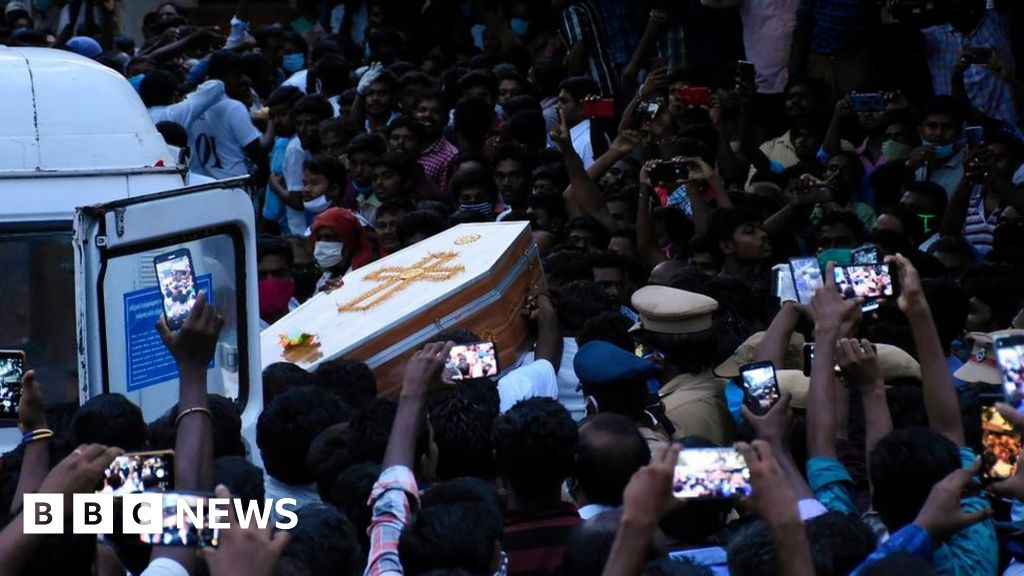 An Indian court has cleared the way for a murder investigation into three police officers accused of torturing and killing two men.

The case has been transferred to federal investigators amid allegations of a cover-up.

P Jeyaraj, 58, and his son Fenix, 38, died on 22 June, two days after being released from police custody.

They had been arrested for allegedly keeping their store open past permitted hours during the coronavirus lockdown.

Tamil Nadu is still observing a lockdown to curb the spread of Covid-19.

The men were held all night at the Sathankulam police station in Tuticorin, a town in the southern state.

The family alleged that they had been tortured – and as the gruesome details emerged the case sparked outrage on and off social media, and soon gained national attention.

Police violence is both widespread and routine in India – a recent report says 1,700 people died in police custody in India in 2019, amounting to five deaths a day. But it’s rare that officers are held accountable.

In this case, however, the details of the deaths sparked angry protests, eventually prompting the high court to hear the case.

The state government has also awarded compensation of one million rupees (£10,716; $13,222) to the victims’ families.

What did the court say?

Based on a report by the local magistrate who is investigating the deaths, the high court said there was a “prima facie” case of murder against the main accused – a police inspector, Sridhar, and two sub- inspectors, Ragu Ganesh and Balakrishnan.

The magistrate’s report included eyewitness testimony by a female constable at the police station in Sathankulam – and the court has asked district officials to ensure her safety.

The court also reprimanded the officers after the magistrate complained that they had been unco-operative during the investigation, and alleged that they had sought to withhold and tamper with evidence.

According to the magistrate, the CCTV footage from the night of the assault had been erased; and the officers had initially refused to hand over the batons they had allegedly used to beat the two men with.

“They [police] were emboldened enough to even intimidate the judicial officer to put spokes in the wheel of his enquiry,” the court said.

It initiated contempt of court proceedings against three officers named by the magistrate.

The state government transferred the case to federal investigators after the court noted that “a free and fair investigation and inquiry” would be difficult otherwise.

What has happened to the police officers involved?

The three officers who were accused in the deaths were initially transferred and, as demands for more severe action grew, they were suspended.

Then, in an unusual turn of events, the court put local revenue officials in charge of the Sathankulam police station to preserve evidence and prevent any further tampering.

And hours after the court accused the officers of failing to co-operate in the investigation, 27 officers from the station were transferred.

The state government has now moved 30 new officers to the police station to fill the vacant positions.

Meanwhile, the police station has been implicated in several other instances of custodial torture and at least two allegations of custodial deaths – with the court saying it has received multiple complaints.

Children were in vehicles during California highway shooting

America, This Is Your Wake-Up Call (10AM)

She Thought Doing THIS Would Be EASY!! She Was Wrong.

How long should you fast for weight loss?

Do U.S. biolabs hold up to scrutiny?

I’m a Nurse Who Hasn’t Been Sick in Years. Coronavirus Almost Killed Me

Economic outlook ‘really grave’ as US looks to open up

Now 10% off, Our Custom Neck Gaiters Can Double as a Headband—and Proceeds Go to Charity