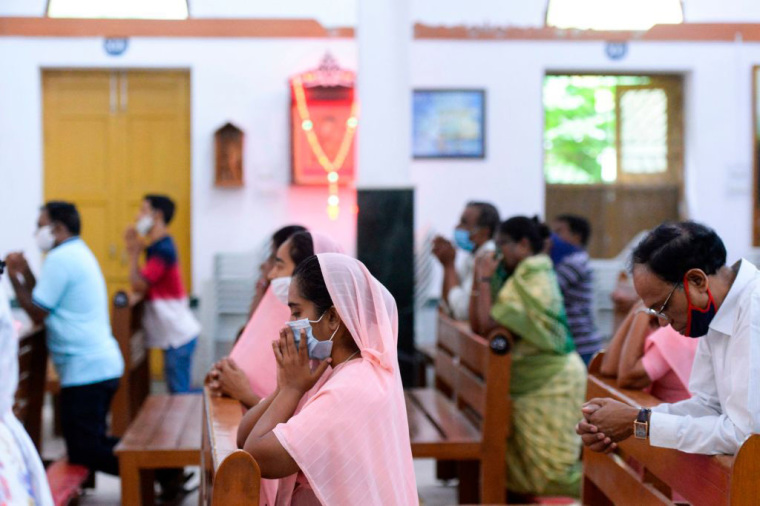 Catholic devotees wear face mask attend the Holy Mass at the Saint Joseph’s Church on the first day after the reopening of religious services after the government eased restrictions imposed as a preventive measure against the COVID-19 coronavirus, in Hyderabad on June 8, 2020. | NOAH SEELAM/AFP via Getty Images

Amid another crackdown on foreign aid, India has canceled six Christian organizations’ licenses to receive donations from outside the country in a move some say is little more than a “shakedown” by the Hindu nationalist party.

According to a report from UCA News, New Life Fellowship Association, Evangelical Churches Association of Manipur, Ecreosoculis North Western Gossner Evangelical, and Northern Evangelical Lutheran Church have all had their licenses canceled under the Foreign Contribution Regulation Act.

Without these licenses, the Christian organizations will be unable to legally receive donations from outside India, hindering their ability to carry out their evangelistic ministries.

“From time to time, relevant matters concerning FCRA norms are reviewed, and government actions are taken,” an official from the Home Ministry told UCAN without citing a specific reason why the Christian organizations’ licenses were canceled.

Prabhudoss told CP that curtailing the flow of foreign money to Christian organizations is “blackmail” on the part of the governing Bharatiya Janata Party, led by Prime Minister Narendra Modi, “in expectations of a payday.”

“A government action like the one taken against these Christian institutions is taken against those who receive substantial amounts of donations/investments from overseas,” he explained.

“Then intermediaries get involved offering to resolve the issue with the government. Those intermediaries will name their price. Once the amount is paid, they will clear the institution of all wrongdoing. Then officially they will restore the ability of these institutions to receive funds from overseas. These ‘donations’ are paid to the party funds or affiliates of the BJP party.”

Since Modi took office in 2014, more than 11,000 nongovernmental organizations have lost their licenses to accept foreign funds, according to The New York Times.

In 2017, Compassion International, a U.S.-based Christian organization that sponsored more than 100,000 impoverished children in India, was forced to stop its operations after its FCRA license was canceled “on suspicion of engaging in religious conversion.”

“President Trump shied away from taking any action,” he said. “I was informed that the president did not show any interest when he was briefed by a friend of his at the White House. That kind of inaction or lack of reaction in a case involving Compassion International has greatly strengthened the confidence of the Hindu nationalist party headed by Mr. Modi.”

According to Prabhudoss, the actions of the Modi government can be narrowed down to “a few people in the highest power circles in India trying to raise donations to the Hindu BJP party.”

“Unfortunately, I have been led to believe that several Christian organizations sending funds to Indian counterparts have paid such ‘donations’ to restore their status,” he said. “However, most Christian charities would not or even could not meet these demands for payments. So they lose their ability to receive funds to continue operating.”

Prabhudoss called on U.S. officials to send “a strong signal to India that such actions by the government are not appreciated and that there will be repercussions.”

He told CP that in addition to addressing the issue with Sam Brownback, U.S. ambassador at large for International Religious Freedom, FIACONA is in dialogue with various church and philanthropy organizations involved in India to put together a coalition to address this issue.

“We are planning to build a grand coalition of organizations and churches to make the case with the U.S. Congress,” he said. “We are seeking churches to participate because almost all Christian organizations in the U.S. are now vulnerable for a shakedown by the Indian government. To avoid that we need cooperation from organizations across the U.S. and U.K.”

India is ranked at No. 10 on Open Doors USA’s World Watch List of countries where it’s most difficult to be a Christian. The organization says that Christians in the country face “horrific” levels of violence from extremists, with thousands of attacks taking place every year.

Trump Gets Tough on Domestic Terrorism

Virginia city removes 2nd Confederate statue in as many days

Hannity: Why CNN won’t highlight progress in the fight against COVID

Reflections upon Juneteenth and “White Guilt”

Atlanta shooting: Rayshard Brooks was shot twice in the back, autopsy report says

5 Ways To Protect Your Immune System As Quarantine Orders Lift

Live: Kenosha police to speak to press on violent protests

Mutated coronavirus under scrutiny for ease of transmission