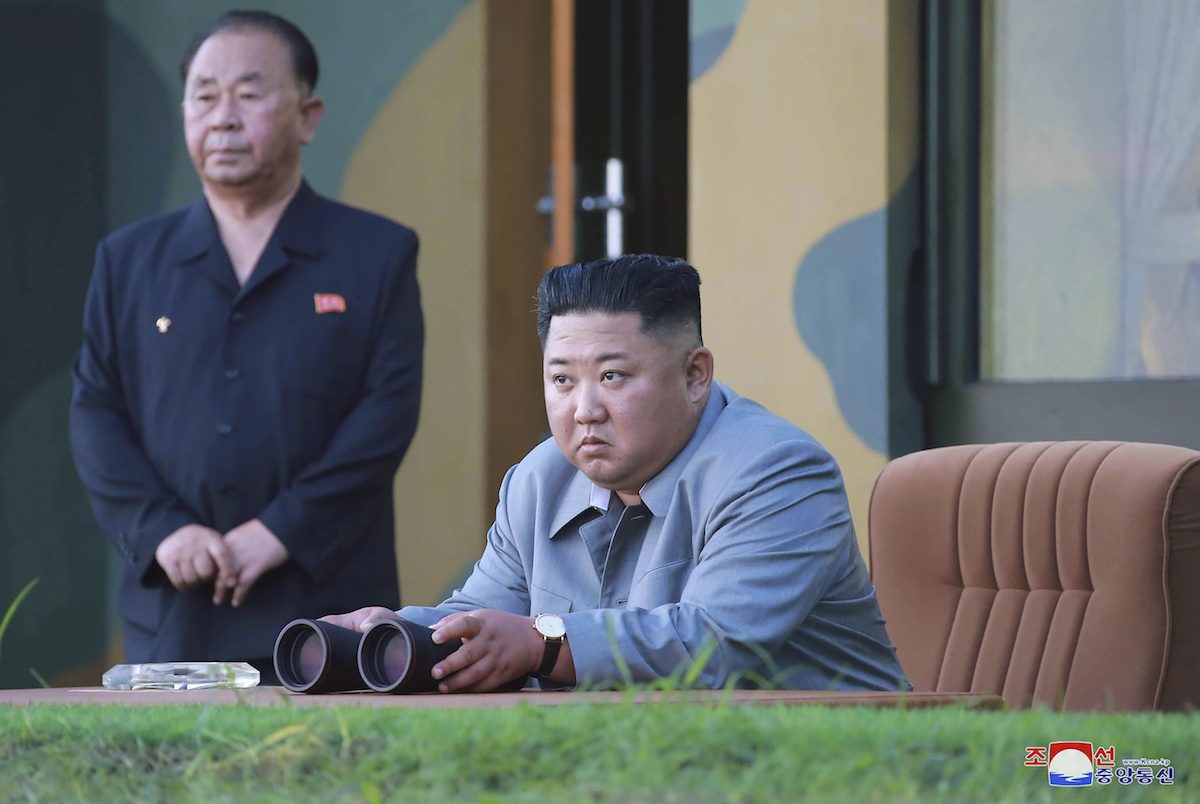 Multiple media outlets have claimed that North Korean dictator Kim Jong Un lies comatose from a botched heart procedure, although President Trump on April 27 seemed to suggest that he was fine—or soon would be.

Still, something seems to be amiss in the North where, according to the South Korean defense minister, there has been an “unusual increase” in air force flight operations and artillery’s readiness drills. And, across the border in China, a column of transports was seen moving heavy tanks in the direction of the border crossing at Dandong.

Even assuming Kim’s current health crisis, if that’s what it is, soon passes, it is worth asking what happens in North Korea when his embalmed body joins those of his father and grandfather in the Kim Il-sung Mausoleum in Pyongyang.

That day may not be all that long in coming. Carrying an estimated 300 pounds on his 5’6” frame, and with porcine jowls, Kim Jong Un is morbidly obese. Add to this his diabetes, his fondness for wine and cheese, his cigarette habit (four packs a day) and his family history of coronary artery disease, and it is no exaggeration to say that he is a walking heart attack.

In the event Kim does not recover from his current health crisis, if that’s what it is, or suffers another fatal one in the next few years, which seems possible, who would succeed him? And what, if anything, would change in North Korea’s repressive domestic or foreign policies?

Dictator Kim’s younger sister, Kim Yo Jong, probably has the inside track. The two Kims are said to have developed a close relationship while they were in Switzerland from 1996 to 2000 attending school. She was a junior cadre in Korean Worker’s Party up until 2011, when her brother became supreme leader. Since then, she has received one promotion after another, a sure sign of his favor.

Aside from their personal relationship, which may matter less to the man who fed his uncle to a pack of hungry dogs than one might think, Ms. Kim is also the Vice Director of the Propaganda and Agitation Department of the Korean Worker’s Party, and as such was reportedly the mastermind behind the creation of her brother’s personality cult. Having done that successfully for her older brother, she would be more than capable of creating her own larger-than-life image.

By 2017, she had joined the Politburo of the Korean Workers’ Party Central Committee, and since then has become a public figure in North Korea, often present at Kim’s public appearances. Internationally, she represented her country at the PyeongChang 2018 Olympic Winter Games, and accompanied her brother to the summit meetings with Trump in Singapore and Vietnam.

On Dec. 17, 2019, in another sign of her growing influence, Ms. Kim issued her first direct military order, calling on all-female units to “remain alert to the working conditions and health of the female soldiers and to extend them special consideration,” reported Daily NK.

Although Kim Jong Un has entrusted his sister with considerable authority, some analysts dismiss the idea that she could become the top leader in a male-dominated communist country with a strong Confucian tradition, a tradition in which women are decidedly subordinate to men. They point to the fact that in neighboring China, Jiang Qing, also known as Madame Mao, was removed by a military coup shortly after the death of her husband, Mao Zedong.

Ms. Kim has a number of advantages over Madame Mao in the power game, however. First of all, she is Kim Jong Un’s only politically active sibling. In a sense, Kim Jong Un has cleared the way for her future rise by sidelining his two older brothers, one permanently. One was put out to pasture while the other, Kim Jong Nam, was assassinated in 2017 in the Kuala Lumpur Airport. Aside from Kim Jong Un’s two-year-old son, that leaves Ms. Kim as the sole claimant for the Kim dynasty throne.

Moreover, despite her tender years, Ms. Kim seems to be no pushover. As soon as she was appointed as vice director of the Propaganda and Agitation Department in November 2014, she took control of the organization in typical Kim family fashion—by carrying out a purge.

She immediately sent three of her fellow vice directors—all of whom ranked higher than she did—off for labor re-education at chicken farms and rural plantations. One assumes that these three elderly officials, two of whom were in their eighties, made the mistake of not taking the 27-year-old upstart seriously, and as a result spent their last few years planting millet and feeding chickens.

Having successfully created her older brother’s personality cult, Ms. Kim is probably more than capable of creating her own. The illusion of toughness is at least as important as the reality, at least with regard to the North Korean army.

The biggest constituency in North Korea, and the one that is key to seizing and holding power, is the 1.2-million-man army. Here Ms. Kim brings important family ties of her own to the table. She is married to the second son of Workers’ Party vice chairman Choe Ryong-hae, who since late 2017 has been a member of the Party’s powerful military commission.

It was perhaps this connection, along with her brother’s support, that allowed her to issue her first direct military order late last year. On Dec. 17, 2019, Ms. Kim called on all-female units to “remain alert to the working conditions and health of the female soldiers and to extend them special consideration,” Daily NK reported.

If Ms. Kim one day manages to ascend to the Kim dynasty throne, we should not expect her rule to be much different from that of her tyrannical brother, father, and grandfather. There will likely be no dramatic opening of the country to the outside world. One-sixth of the North Korean population will remain incarcerated in the nation’s huge network of labor camps, while the rest will continue to languish in the larger prison camp that is North Korea itself, kept in the dark about what goes on outside of the country’s borders.

Indeed, I would give you better than even odds that Ms. Kim might well add to the concentration camp population in her first years as ruler, just as she did when taking over the Party’s Propaganda and Agitation Department years before. After all, her brother carried out a series of purges upon taking office to consolidate his power. These resulted in the execution of dozens of senior military and government officials, including his own uncle and close adviser, Jang Song-thaek, in 2013. Ms. Kim may well decide to strike terror into the hearts of the entire party elite in the same way.

As for what Ms. Kim’s rule would mean for North Korean foreign policy, that remains an open question. She has not given any major policy addresses, either on foreign or domestic policy. Some have suggested that she, as a woman, will have to prove her toughness by returning to the practice of her father and grandfather of carrying out lethal attacks on South Korea and the U.S. forces stationed there. Others have suggested that, as a minimum, she may be expected to resume the periodic nuclear tests and destabilizing missile launches that have characterized her brothers rule.

This latter is probably closer to the mark.

The firings, she said, were an “action for self-defense” that was “not aimed to threaten anybody.”

This surely sounds more bellicose than conciliatory. It may be a sign that, even if Ms. Kim one day replaces her brother, the reunification of the Korean peninsula will remain a long way off.

Steven W. Mosher is the president of the Population Research Institute and the author of “Bully of Asia: Why China’s “Dream” is the New Threat to World Order.” @StevenWMosher

An independent COVID-19 investigation is an imperative

South Korea Minister, US Sources, Say Kim May Be Sheltering From Virus

Editorial: There Is A Cure for the Chinese Communist Party Pneumonia—Say No to the CCP

Kim Jong Un dead? If so, what’s next?

Disregard for the state of emergency — from inside local government