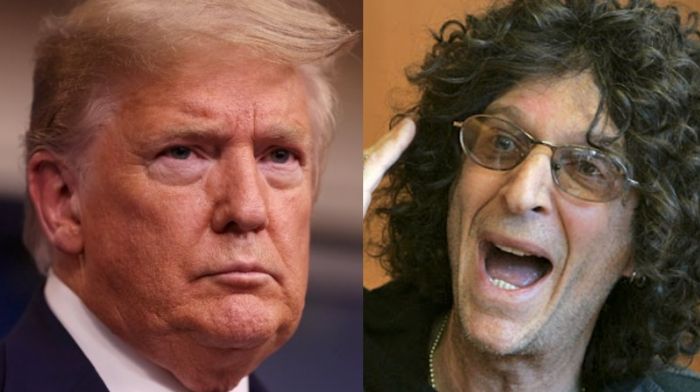 Yesterday, we reported that radio host Howard Stern had launched a vile attack on President Donald Trump and his supporters, saying that those who voted for him should take disinfectant and “drop dead.” On his show on Tuesday, Stern refused to apologize for his controversial remarks, instead saying that anyone who can’t see that Trump mishandled the coronavirus crisis is “f***ing mental.”

Stern began his latest rant by saying that while he is surprised the media picked up his initial comments wishing death upon millions of conservative Americans, he stands by them because he believes Trump “blew it” when it came to responding to COVID-19.

“We’re America, we had a whole bunch of viruses that have come and gone because we had very, very competent people and whole organizations set up to keep this stuff out of America. And you know a lot of those people were fired. I’m pissed. I’m pissed off,” Stern said. “We could have been on top of this thing. And if you’re not pissed off your f-cking mental.”

Not stopping there, the shock jock only became more unhinged: “History is going to tell the truth. This administration dropped the f-cking ball,” he exclaimed. “They did. I mean, you can go believe whatever the f-ck you want. I know what I believe. And I’m pissed off about it.”

Stern went on to discuss fan reactions that he’d received after his comments, indicating that the negative responses to his offensive political views had touched a nerve. “People are writing me about politics, ‘Howard don’t talk about politics.’ F-ck this isn’t politics man. I’m locked in my house because of this sh**,” he said. “Politics, they blew it. You got to know that. You don’t know that, you’re a f-cking moron. Go ahead and Clorox your a**hole. Pour it in.”

If an entertainer had wished death upon millions of Democrats, he or she would have been blacklisted immediately from the entire entertainment industry. Since Stern went after Trump supporters, however, he likely won’t suffer any career repercussions from this. It’s despicable that he couldn’t see the error of his ways, and decided to double down instead of apologize for wishing harm upon millions of people.

How Beijing Is Exploiting The Pandemic To Expand Its Global Power

The Chinese Government Wasn't Happy with This Reporter, so He Doubled Down [VIDEO]

'Are you a spoiler?': why critics fear Amash's Libertarian bid may ensure a Trump win

I can’t take it anymore. This COVID levee is gonna break…

The Myth of the Bleach-Drinking Masses

Deaths Spike in New York City and Around the World

AOC Says You SHOULDN'T Go Back to Work. Here's Her Dumb Reason … [VIDEO]