Authored by Sam Leith via UnHerd.com,

“Yikes,” I thought this morning. “My profession is trying to kill us.” 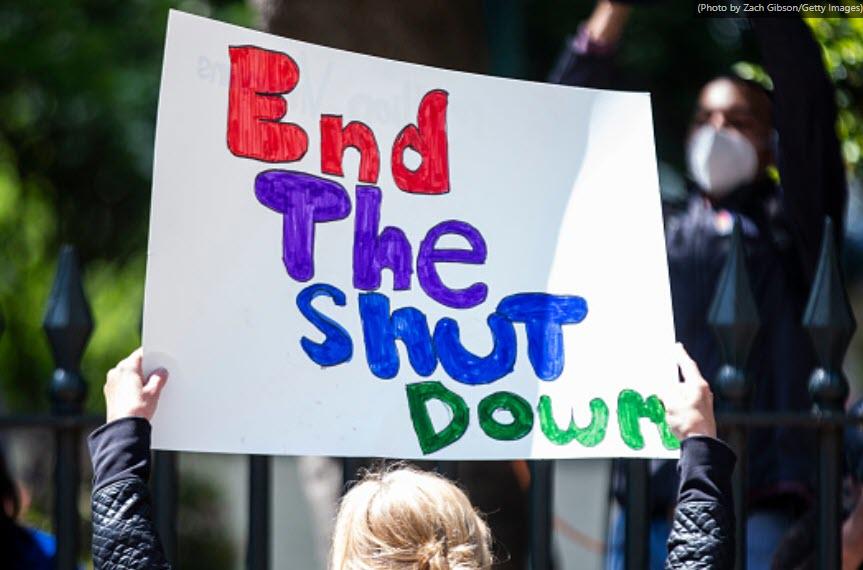 The front pages – as they now had been for a few days – were full of the “dilemma” facing the Prime Minister: to ease or end lockdown or to keep it going. Explainers neatly carved the cabinet into “hawks” and “doves”. I know that we should resist the temptation for journalists to peer into the linty navel of journalism itself, but bear with me: in this case it could really matter.

If we do end or ease the Covid lockdown, it probably won’t end up being on the advice of epidemiologists or even economists – it’ll be because the way the media shapes the story brings an irresistible pressure to bear.

The idea of the Overton Window – a term minted to describe the range of acceptable opinion within a given community – is relevant here.

Why are we having this debate now? It’s because we need to have a debate and that’s the only one in town. That applies to social media as well as the so-called MSM — and there’s an argument that the news reflects public impatience as much as it shapes it. But with “stay as we are” as the dreary old fixed option at one end of the scale, the moderate middle will only be pulled further out as contrarians and freethinkers push the other end of the window further and further in the hope of having something fresh to say.

I don’t make, or pretend to make, any judgment on the science. It may, for all I know, be the case that we should long since have galloped out of lockdown and even now be handshaking and air-kissing our way back to prosperity. But, for all I know, it could equally well be the case that we should continue doing exactly, but exactly, what we’re doing now for the next six months. And if the latter is, objectively, the case, it’s going to be near to impossible for politicians to argue for it — and to keep arguing for it.

The problem I point to isn’t to do with virology. It’s narratological: it’s to do with the shape of storytelling and the weird metabolism of the media cycle. News has its own imperatives, and they are nearly completely independent of the real world. Every news editor’s question is: “How do we take the story on?” The answer can never be: “We can’t.” If there are no new facts, there’s got to be a new analysis, a new spin, a new controversy, a new debate. A story big enough to stay on the front page needs to find a way of staying on the front page.

We are simply incapable of running a front page that reads: “Same as yesterday.”

It’s close to unthinkable. Indeed, we’d unthinkingly risk lives to avoid it. We all hear a lot about news media’s inbuilt negativity bias (“if it bleeds it leads”). But what you might call the stuff happening bias — the very reason news is called news — is dismayingly easy to forget or discount.

That’s why, as crime reporters know, a week or two into a high-profile missing persons investigation where there are no new developments, the story tends to pivot to asking questions about “flaws in the investigation”. Then we move onto wild theories, monstering suspects with weird hair and all the rest of it. The Daily Express has spent more than 10 years splashing Madeleine McCann despite little or no new information coming to light.

We had, as all that petered out, the beginnings of the blame-game: did the government act too slowly? Was Dominic Cummings on the wrong committee? And if you don’t think that stuff affects government, I have a bridge going cheap. Why else is Matt Hancock plucking round-numbered testing ambitions out of the air and making himself a hostage to them? Why else did we announce that we were spending zillions on “game-changing” home tests before we discovered they didn’t work? Why else did we get flares sent up about headline-friendly, household-name companies like Dyson being hired to make ventilators — which, again, turned to be a distinctly half-cocked initiative? Why else, as the bodies mount up in morgues, is Downing Street spending its time issuing detailed denials of Sunday Times articles?

I kind of knew something was up when I was asked, as a freelance, to contribute to a feature on what I’m most looking forward to doing once lockdown was over. Y’know: go to the pub, fly to Malaga, give my old mum a hug, have a fight at a football match or what have you. And I got this request on week one or week two of lockdown. The following day another outlet asked me to contribute to a near-identical feature. Everyone’s done one of those by now.

I remember thinking even then: guys, you’re shooting your bolts a bit early on all this. If you run all your lockdown features in the first two weeks, what‘s going to be next? It’s the same for all media. We’ve already burned through Grayson Perry’s art class, Kirstie Allsop’s craft class, Jamie’s bloody tin can recipes. We’ve winkled out Vera Lynn. We’ve had the Rolling Stones playing a Zoom gig. Every books page has run its “shelf isolation” feature on lockdown comfort-reading. Every cookery page has done its make-your-own sourdough.

The idea that lockdown might be boring — might, in fact, need to go on for much, much longer than it retains its novelty value — is scary to many of us but it’s really, really scary to news and features editors. And that means it’s scary to politicians. Which means that, one way or another, and whatever the papers tell you, what happens over the next few weeks isn’t going to be guided by the logic of science or economics, but by the logic of narrative.  That logic is the logic of the small child in the back of a car kicking the front seat and saying: “Are we there yet?”

And that’s something all of us should find really, really scary.

Do I have a fever?

The Real Truth About Norma McCorvey, the ‘Roe’ of Roe v Wade

Q&A What are the rules for meeting friends during Spain’s Phase 1?

AG Barr: Price Gouge Panicked Customers and You Could Be Prosecuted

Could pandemic pave a path to peace? Why Yemen war is resistant.

In Addition To Its Tiny Arms, T. Rex’s Legs Meant It Could Barely Run