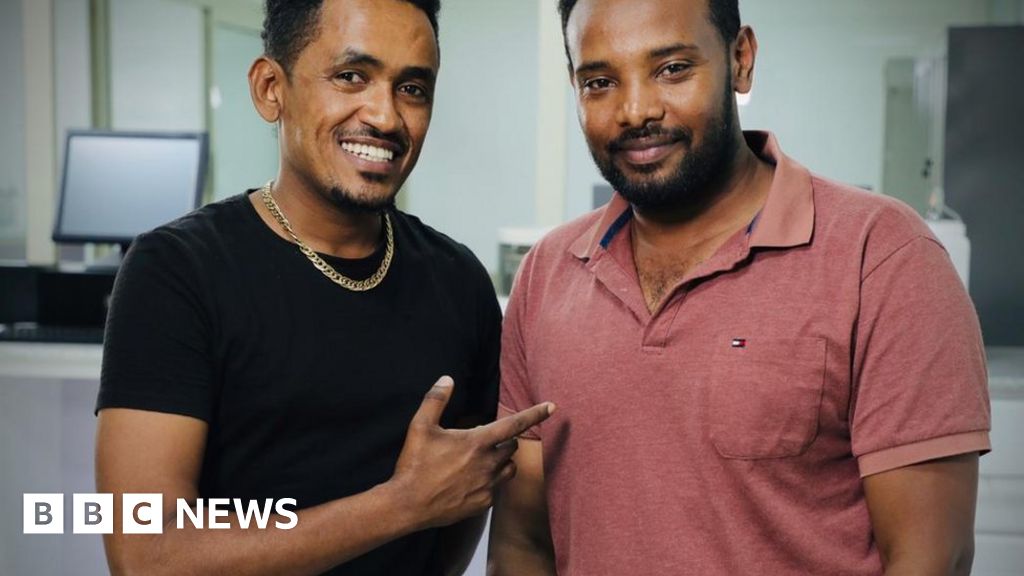 The killing of Ethiopian protest singer and revered musician Hachalu Hundessa led to days of unrest in the country, and the deaths of at least 80 people during protests.

Hachalu mostly sang about love and unity, but his songs also addressed issues of marginalisation felt by his Oromo ethnic group.

BBC camera operator Amensisa Ifa, who was a friend of the musician’s and had filmed an award-winning video with him, looks back on the days since he died.

Sometimes when I think about Hachalu’s death, I think that I would rather have died if that meant that he could live.

He was a hero to many, and had so much to offer his people.

He always fought for them – and during those times when many artists, activists and politicians fled the country, Hachalu stayed back raising issues that many would not dare to raise.

‘Hachalu is in hospital’

I started getting calls and text messages after 22:00 (19:00 GMT) on Monday from friends who were all asking me about what had happened to Hachalu.

No-one at the point was saying that he was dead, but it was clear that something had happened.

I tried calling our other friends, but no-one was picking up. Then I got a text message to say that Hachalu was in hospital.

I decided to drive there and, on my way, managed to reach one of our friends on the phone and he told me, sobbing, that he was standing next to Hachalu’s body.

Hachalu had been shot dead.

When I got to the hospital there was a lot of noise inside the room where the body was.

Someone uncovered it and I saw what looked to me like a gunshot wound to his chest.

The police were there, as well as a lot of friends.

“Don’t tell me this is real,” we kept on screaming.

Hachalu’s body was then taken to another hospital so the doctors could do further investigations, and we followed the ambulance.

We stayed through the night. At about 04:00 we went outside and the whole area in front of the hospital was full of people as the news had spread about Hachalu’s death.

Everybody was crying, calling his name.

Then after sunrise, we tried to take the body out of the capital, Addis Ababa, to Hachalu’s home town of Ambo – about 100km (60 miles) west of Addis Ababa.

‘Hachalu is our hero’

As we drove out of the city in a convoy, I could see that there had been a lot of trouble. I could hear gunshots and the police launching tear gas.

We got as far as Burayu, about 15km, where we met thousands of people who had been travelling into Addis Ababa on foot, on lorries and buses; many of them in shock and grief, and wanting to pay their respects.

These were people from different parts of Oromia who had been travelling overnight after hearing of Hachalu’s death. Many were asking for the funeral to take place in the capital.

Sitting in my car, I heard people saying: “Hachalu is our nation’s hero. He deserves a heroic funeral in Addis.”

Our convoy stopped there for a while, and then we started the journey back to Addis Ababa.

We later found out that the government insisted that Hachalu should be laid to rest in Ambo, as it was what the family had wanted. As a result his body was flown by helicopter to the town.

But I couldn’t go to Ambo for the funeral on Thursday as the roads had been blocked.

Instead I had to follow the ceremony on television, and that was the toughest moment for me.

I wanted to be with him to say goodbye properly. I could see that not many people had been allowed to attend, and in our culture you cannot bury even an ordinary person with just a few people around, let alone a big hero like Hachalu.

As I was watching, I was sobbing.

I called my mother in tears and told her: “I want to die today.” She was also crying and I’ve been crying ever since, every time someone asks me how I’m feeling.

Even on Thursday, when I heard that something had happened to a friend of his, I instinctively started dialling Hachalu’s number to talk to him about it.

I had talked to him a week before he was shot and he told me that he had a new song that he wanted to play me called “Eessa Jirta?” meaning Where Are You?

Hachalu’s art was not limited to politics. He sang about culture, identity, unity, human rights and love among other things.

I also wanted to chat about a television interview he had just given where he was telling people that he would not turn his back on his political views.

He was talking about the rights of the Oromo people, Ethiopia’s largest ethnic group who have long complained of political and economic marginalisation.

People had been accusing him of accepting money from the country’s new governing party – the Prosperity Party – but he said: “No-one can buy me.”

He always knew that people disagreed with him, and there were incidents in which he had rows with some people in Addis Ababa.

But he never worried for his life. He often said someone who dies for his people is a hero.

“I’m no different to anyone else,” he told me once, “I may die one day, but I am not afraid of dying.”

GATA ISSUES LETTER TO THE CFTC

FOMC Preview: A Confidence Game Where The Difficult Questions Will Be Avoided

Marines May Get New Tropical Uniform in Time for Summer Heat

Women who dare dissent targeted for abuse by Yemen's rebels

This is the last week of $600 unemployment benefits

U. Michigan Orders Quarantine for Students Returning to Campus, Even if it Means Quitting a Job