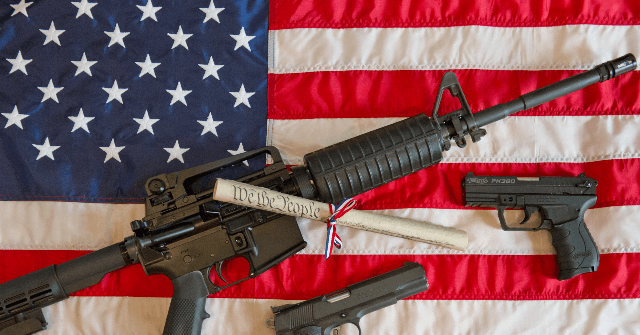 Gun sales year-to-date in 2020 already surpass the total number of guns sold for all of 2019.

WGNTV quotes National Shooting Sports Foundation public relations director Mark Oliva saying, “We have already surpassed all of the guns sold last year and we are well on our way to surpassing our record of 2016.”

Massachusetts’ Pioneer Valley Arms owner Kendall Knapik said, “I’ve been in the industry for about 10 years now, and this is probably the craziest we’ve ever seen it. It’s mostly shotguns, home-defense shotguns. Those were the first to sell out. Then, people moved to handguns once the shotgun manufacturers couldn’t keep up with the demand.”

October 15, 2020, Breitbart News reported that Smith & Wesson stock was up over 130 percent for the year amid the run on guns, and Sturm Ruger Co.’s stock was up 42 percent.

WATCH: Biden Tell 56% Of Voters NOT To Vote For Him

Actually if this BLM AND ANTIFA DONT CHANCE THEIR WAYS, THERES GOING TO BE ENOUGH FED UP CITIZENS THATS NOT GOING TO TAKE THEIR SHIT ANYMORE’ ?????????? https://t.co/4hOhXyHJC7

WHAT WILL IT TAKE FOR MASKS AND FACE SHIELDS TO END?