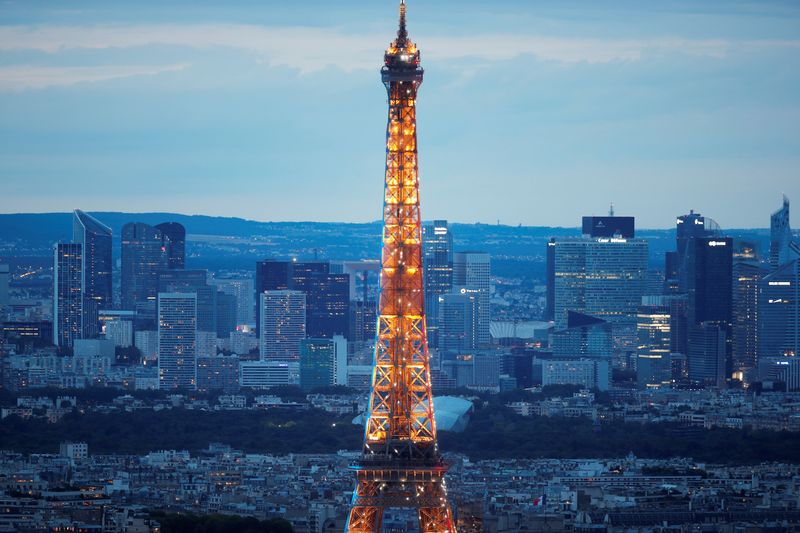 PARIS (Reuters) – The French economy contracted by a post-war record of 13.8% in the second quarter, crushed by a coronavirus lockdown, although the drop was shallower than expected and a bounceback in consumer spending offered hope of recovery.

The contraction in the euro zone’s second-largest economy was steeper than the 10.1% reported by Germany, where authorities kept a surge in COVID-19 related deaths in check and did not have to enforce a lockdown as strict as France’s.

The French lockdown was stringently enforced until May 11, with non-essential shops shut down, and gradually lifted over the course of the second quarter, with cafes and restaurants being allowed to open on June 2.

The contraction was not as severe as the 17% predicted earlier this month by national statistics office INSEE and the 15.3% reduction pencilled in by analysts polled by Reuters.

“Not too bad!” tweeted Allianz chief economist Ludovic Subran. “We were expecting -16% but deconfinement saved the day.”

In another hopeful sign, consumer spending – the traditional engine of the French economy – shot back above its pre-lockdown level in June, INSEE said.

Finance Minister Bruno Le Maire pounced on the data to encourage consumers to spend money saved during the lockdown to pull the country out of the deepest recession since World War Two.

“The best way to quickly pull out of this situation is to have French people spending,” Le Maire said, assuring them the government would not raise taxes.

French households could be sitting on a 100 billion-euro pool of savings by the end of the year, the governor of the Bank of France estimated earlier.

Unlike in the United States, many people in France and Europe have kept their jobs despite the lockdown, thanks to a government scheme that subsidised salaries.

But it remains to be seen whether June’s strong consumer data can continue unabated. In July, consumer confidence unexpectedly dropped amid signs of a rebound in COVID-19 infections.

INSEE also revised down to 5.9% from 5.3% the drop in gross domestic product in the first quarter, which included about a fortnight of lockdown, which was imposed on March 17.

That was the third consecutive decline in GDP, in a recession that started in the fourth quarter of last year, when nationwide strikes shaved 0.2% off national output.

INSEE said earlier this year it expected the economy to rebound by 19% in the third quarter and a further 3% in the fourth quarter, with activity 1% to 6% below pre-crisis levels by December.

The drop in the construction sector was particularly steep, INSEE said, with a 24.1% plunge.

Analysts have mentioned the paralysis in the French construction sector as one difference explaining the better performance in Germany, where construction sites stayed open through lockdown.

Biden: I Am ‘Constantly Tested’ For Cognitive Decline

How to Prune Tomatoes for MASSIVE Harvest

The Evidence is Mounting that Obama Set Up Flynn

Coronavirus: Italy to reopen borders to EU tourists 'without 14-day quarantine' from 3 June

Koji Makes Anything Taste Better. Here’s How to Get Started.

Steve Bannon indicted for defrauding ‘We Build the Wall’ donors

What does faltering start mean for Donald Trump’s reelection campaign?