Below is my column in the Hill on the nomination of Judge Amy Coney Barrett and the oddly disconnected questions during her confirmation hearing.  While I have written about the revealing moments of the hearing, the Democrats clearly elected not to focus on the nominee but the election. When they did attack the nominee, they fired wildly and missed completely in three areas. 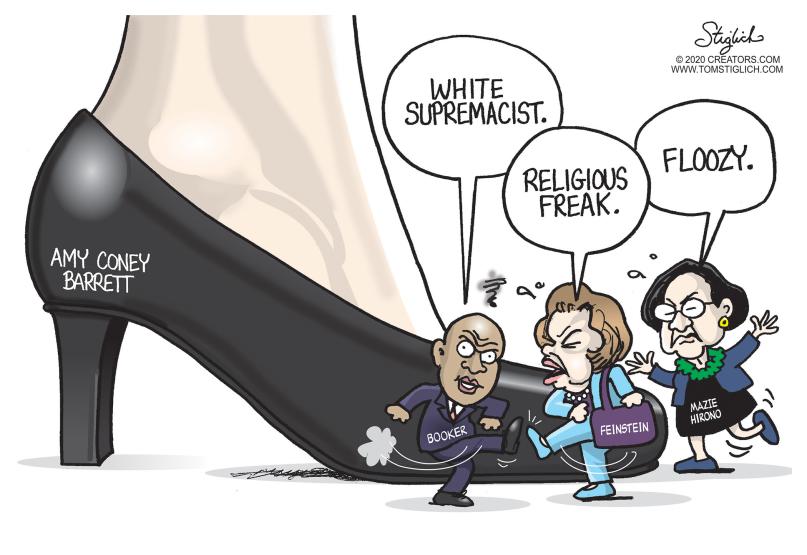 Here is the column:

Benjamin Franklin once said, “it is hard for an empty sack to stand upright.” It took almost 300 years, but Franklin’s observation finally has been proven demonstrably true. The three-day Senate Judiciary Committee hearing for federal appellate judge and Supreme Court nominee Amy Coney Barrett can best be described as an empty-sack confirmation that simply would not stand upright.

From the outset, committee Democrats were dealing with a highly qualified nominee who has the intellect, the temperament and the background to be an exceptional justice. And that was the problem.

Democrats decided to use the hearing as a springboard for the coming election. They never intended to put anything in the sack against Barrett. Yet, to frame this effort, they advanced a number of false premises that collapsed on their own weight:

The Affordable Care Act (ACA) is about to be killed

Barrett was surrounded in the hearing room by photos of ill individuals who could perish without national health care. It made Barrett look like some judicial serial-killer.  However, these were not her victims. Indeed, the entire premise was false.

Senate Democrats were suggesting that the pending case of California v. Texas was just one vote shy of striking down the ACA. It left many of us watching in disbelief. While a district court struck down the whole act, an appellate court wanted to send it back to consider the elements of “severability.” The vast majority of experts believe that the striking down of one provision — the individual mandate provision — should not result in the loss of the entire act. More importantly, a clear majority of the Supreme Court appears to believe that. Chief Justice John Roberts and Justice Brett Kavanaugh both are expected to vote to uphold the rest of the act. Indeed, a Justice Barrett could well vote with them.

What is clear is that it is extremely unlikely that the ACA is teetering on destruction. Numerically, the current head-counting means that it is as likely that a unanimous court would support severability as a five justice majority would strike down the whole act.

None of that mattered, however, as Democratic committee members spun a conspiracy theory that Barrett’s nomination was all about supplying that needed fifth vote just before a Nov. 10 court hearing on the case. It was an empty sack that just laid there as Barrett explained this was a narrow question of severability and she has never ruled on the issue of severability.

Abortions are about to become illegal in America

Barrett is undeniably pro-life. She’s said so over and over. She also said she does not consider Roe v. Wade to be a “super precedent.” As such, the case is not inviolate and can be revisited.

However, even if Barrett were to supply the fifth vote on the court to overturn Roe — which remains unlikely — it would not make abortion illegal. Indeed, former Vice President Joe Biden himself has explained why. He said recently that if Barrett helped overturn Roe, his “only response [would be] … [to] pass legislation making Roe the law of the land. That’s what I would do.”

Put aside for the moment that forcing states to accept abortion, if it is no longer a constitutional right, could be challenging under the 10th Amendment. The broader point is still valid: Such a decision would simply return the question to the states. And the majority of states likely would continue to guarantee the right to abortion as a legislative matter. In other words, Roe might end — but it would not end the right to choose, as a matter of state law.

Ironically, Barrett is a huge defender of states’ rights and would likely defend pro-choice states in asserting such federalism powers.

Barrett is unethical because she will not recuse herself

One of the weakest arguments is that Barrett cannot be confirmed unless she agrees to recuse herself from the ACA case or future election controversies. The reason is that Democrats say there is an appearance that President Trump really wants her on the court to vote on such issues. However, that logic would seem to require not just the recusal of the other two Trump-nominated justices — Neil Gorsuch and Brett Kavanaugh — but a host of other justices who were confirmed a year before elections in prior administrations.

There is no reason for Barrett to recuse herself under the court’s governing standards. She has no personal or financial interests in these challenges and did not work on any of the underlying litigation, including election litigation that has not occurred yet. Nonetheless, Barrett pledged to consider recusal if anyone raises the appearance of a conflict and to apply the governing standard of 28 U.S. Code § 455. That was not enough for Sen. Mazie Hirono (D-Hawaii), who responded to her pledge by saying “the fact that you wouldn’t even bring forth the recusal process says to me that voters may decide there is an appearance of conflict.” That was as confusing legally as it was grammatically for most of us.

We ended this hearing where we began it, with nothing from Senate Democrats relevant to the actual nomination. Instead, they gave us probing questions about Barrett’s views on global warning and how she felt about putting immigrant children in cages. No serious answers were expected by the Democrats, and no answers given.

Indeed, for much of the hearing, Barrett seemed as relevant to senators as the ficus plant in the corner of the hearing room. Speeches were made. Pictures were paraded. Voters were beckoned. Even the Houston Astros were maligned. But nobody could get that empty sack to sit upright.

ICF Mountain Homestead: Why We Are Using Stucco Over Insulated Concrete Forms (ICF)

How to Crack Password-Protected ZIP Files, PDFs & More with Zydra

$50 challenge: How to spend a day in Wellington on a budget

So that's what they do! Prince Harry discusses the 'new job' he and Meghan Markle have

The Toughest Question Any Leader Can Answer Now: “What If I’m Wrong?”

Do Cabbage Plants Harm Tomato Plants?: Don’t Plant Them Together, The Answer is Yes & Here’s Proof!

New Trump Appointee Has Denounced Liberal Democracy and ‘Our Homo-Empire’

Move over Judith, Nik Given considers adding Winston to his leg tattoo

Vaccinations Have Sharply Declined Nationwide during the COVID-19 Pandemic

The long wait: 179 days for assessment for struggling Waikato children

Journalist Praised For Asking Trump Hard-Hitting Question ‘What’s It Like Being Such A Big Poopy Pants Buttface?’