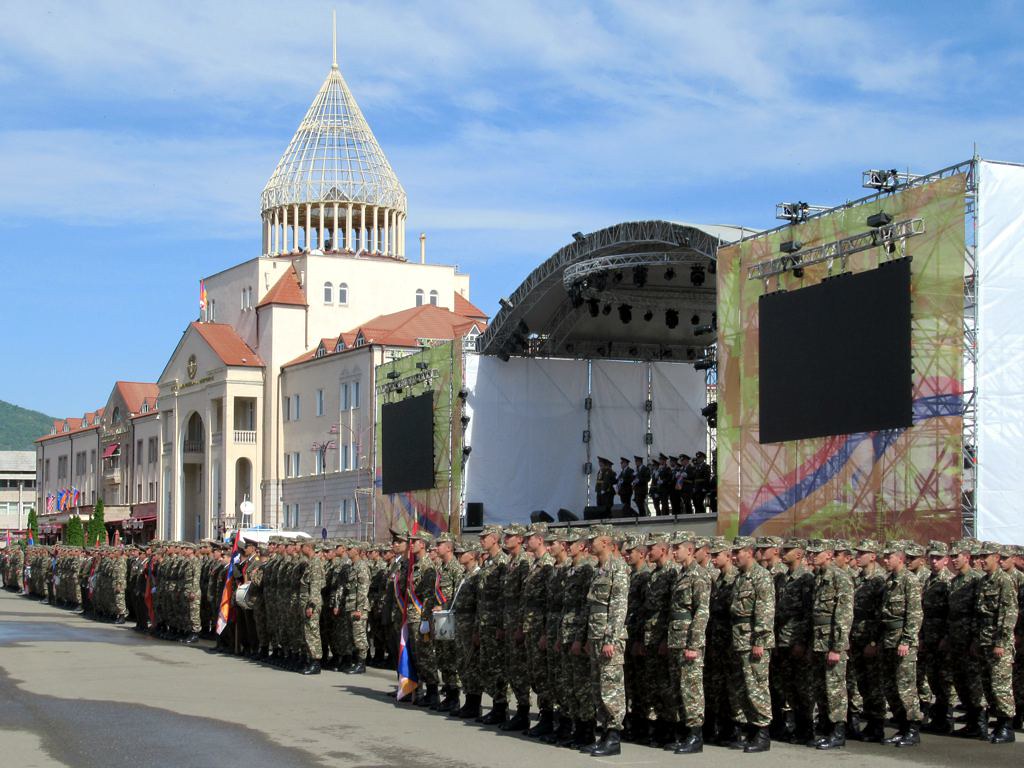 Tucked among the peaks and arid plateaus of the South Caucasus, at the crossroads of centuries of empires, Nagorno-Karabakh is yet again at the center of a violent struggle, as Azerbaijan and Armenia pound each other in what has turned into the worst spasm of fighting since a 1994 cease-fire ended all-out war.

The fighting — which has killed at least 532 soldiers since it erupted on September 27 — has roots that stretch back to the waning days of the Soviet Union, if not generations earlier.

Here are five key things to know about the conflict over Nagorno-Karabakh.

The Caucasus has seen armies march across the territory for centuries: Romans, Muslim Arabs, Ottomans, Safavid Persian, Russians, to name a few.

That also includes an ancient Armenian kingdom that existed beginning in 300 B.C., which, for many Armenian nationalists, serves as a symbol of the country’s former glory and the starting point for any discussion about who is the rightful owner of Nagorno-Karabakh.

Modern-day Armenians often call the mountainous territory Artsakh after a part of the ancient Armenian kingdom.

It was a semi-independent region, populated mainly by Christian Armenians and ruled by an Azeri Turkic — and Muslim — leader known as a khan, under Safavid Iranian rule in the 19th century. Control passed to the Russian Empire in the early 1800s, and then to the Soviet Union after the 1918 Bolshevik Revolution.

In the vacuum at the end of World War I and amid the chaos of the Russian Civil War, both Armenia and Azerbaijan declared independence, moves acknowledged by the wartime Allied powers. Troops from both sides clashed several times over various territories, including Nagorno-Karabakh, until 1920, when the Red Army occupied the entire area that Russia called the Transcaucasus and put an end to it.

Before he even became the autocratic leader of the Soviet Union, Josef Stalin played a role in decisions that would later lead to tensions and war over Nagorno-Karabakh.

In the 1920s, with Vladimir Lenin trying to cement communist rule, Stalin became the commissar of nationalities, where his writ included figuring out how the Communist Party should go about governing far-flung provinces and scores of ethnic groups.

He oversaw map-making and administrative boundaries, in some cases arbitrarily drawing borders that purposely divided communities, something historians believe was done to dilute the political power of some ethnic groups.

In the Caucasus, of which Stalin was a native, the borders of Karabakh were formalized in 1923 and the Nagorno-Karabakh Autonomous Oblast became part of the Azerbaijani Soviet Socialist Republic. The arrangement also resulted in the creation of Naxcivan, a region of Azerbaijan that is populated mainly by Azeris that is sandwiched between Armenia and Iran but does not border Azerbaijan proper.

For decades after, as elsewhere in the Soviet Union, the Communist Party and the leadership in Moscow kept a tight lid on any sort of nationalist or religious sentiment that could stir trouble.

That lid loosened under Mikhail Gorbachev’s glasnost and perestroika policies in the late 1980s. On February 20, 1988, the local governing Council of People’s Deputies in Nagorno-Karabakh, dominated by ethnic Armenians, declared its intention to unify with Armenia. At the time, about three-quarters of the region’s 190,000 people were Armenian, with one-quarter Azeri.

That prompted massive marches: in Baku, of outrage, and in Yerevan, of support.

Two days after the declaration, Azerbaijanis and Armenians brawled near the town of Askeran — the first bloodshed in the modern iteration of the conflict. Five days after that, Azerbaijani mobs rampaged through the Baku suburb of Sumgait, home to a large Armenian community.

Officially, 32 people were killed; Armenians say the toll was in the hundreds. Azerbaijanis draw a parallel to the killings of scores of Azerbaijanis fleeing fighting near the Nagorno-Karabakh town of Khojaly in February 1992, as full-scale war erupted.

For the next three years, Armenia and Azerbaijan pushed and pulled over legal authority and boundaries and referendums, amid low-level street violence and village pogroms, until the two republics declared independence in August and September 1991 and the Soviet Union ceased to exist that December.

By February 1992, with both sides drawing on armaments and weaponry left behind by Soviet troops, full-scale war erupted.

Fighting stopped with a cease-fire in May 1994, with ethnic Armenian forces in control of almost all of Nagorno-Karabakh, as well as several surrounding districts — a sizable chunk of Azerbaijani territory.

It was a humiliating defeat for Baku. Some 30,000 people were killed and more than 1 million others were driven from their homes. Some 870,000 Azerbaijanis fled Nagorno-Karabakh, the surrounding districts seized by ethnic Armenian forces, and Armenia itself, and about 300,000 ethnic Armenians fled Azerbaijan, according to United Nations refugee agency figures.

Since 1995, France, Russia, and the United States have served as co-chairs of the Minsk Group, an initiative of the Organization for Security and Cooperation in Europe (OSCE) that has sought — unsuccessfully, so far — to guide Armenia and Azerbaijan to a resolution of the conflict.

The closest the two sides came to an agreement may have been in 2001 when the countries’ two presidents met in the U.S. state of Florida under the mediation of the Minsk Group.

For over a quarter-century, the two sides have faced off along a so-called Line of Contact, regularly trading angry rhetoric, sniper fire, and occasional mortar rounds, inflicting small casualties. Azerbaijan has spent hundreds of millions of dollars — revenue from its large oil and gas reserves — to modernize its armed forces, leading observers to warn continually of the danger of new war.

Among the highest hurdles to an agreement are disputes over the future status of Nagorno-Karabakh and the fate of the surrounding areas that are held by ethnic Armenian forces and stretch to the Armenian border. The claim of independence made by the de facto leadership in Nagorno-Karabakh has not been recognized by any country, including Armenia.

Until September 2020, the worst bout of violence since 1994 occurred in April 2016, when some 200 soldiers and civilians were killed.

Factors adding fuel to the fire in the 2020 fighting include the advent of new weaponry: first and foremost drones, also known as unmanned aerial vehicles. Neither country has much of an air force, so the bulk of fighting has taken place on the ground. Azerbaijan, however, has invested heavily in drones in recent years, buying and licensing production of Israeli drones, and more recently, more sophisticated Turkish UAVs.

Some observers point to a lack of engagement in recent months by outside powers including Minsk Group co-chairs France and the United States. The world has been consumed with the COVID-19 pandemic, and U.S. President Donald Trump’s administration, which had been dialing back diplomacy in many parts of the world, was distracted by his reelection bid.

Meanwhile, Turkey, Azerbaijan’s traditional ally, has flexed its regional muscles to a much greater degree in recent years, posing a challenge to Russia’s clout in the South Caucasus.

Turkey has played a far more active role in 2020 than in previous hostilities in Nagorno-Karabakh, reportedly sending operators to pilot surveillance drones in support of Azerbaijani forces.

Russia has a military base in Armenia and leads the Collective Security Treaty Organization (CSTO), a regional grouping that includes Armenia but not Azerbaijan. Moscow has also sold millions of dollars’ worth of armaments to both Armenia and Azerbaijan.

Overall, the Kremlin is concerned about losing clout in the South Caucasus, as well as other parts of the former Soviet Union, and about the prospect of Turkey infringing too deeply in what Moscow sees as its traditional sphere of influence.

US charges 6 Russians with hacking French election, Olympics and more

War on Terror veterans to be honored at Air Force Museum

Trump To Spend Days at Military Hospital After COVID-19 Diagnosis

Armenia and Azerbaijan Accuse Each Other of Breaking U.S.-Brokered Ceasefire

Chatting Your Way to a Better Memory

#DETROITLEAKS — Anyone with Easily-Forged ‘Voter Registration Receipt’ Can Come to a Precinct, Receive a Ballot, and Vote!

More than 50 million Americans vote early in US presidential election