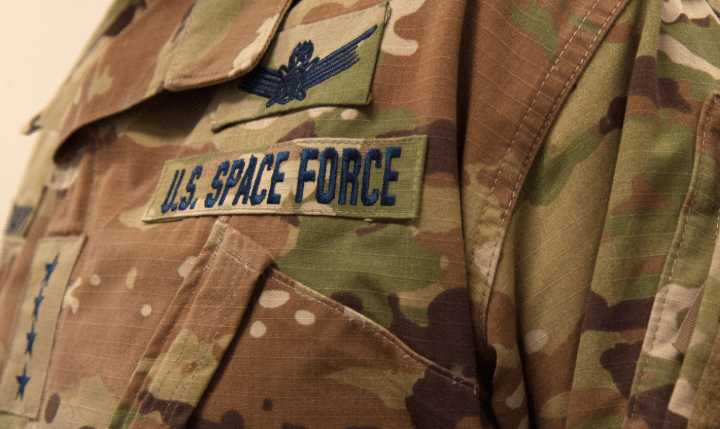 The first seven direct enlistees in the U.S. Space Force will head to basic training this month at Lackland Air Force Base in Texas where they will train together with Air Force recruits.

Chief Master Sgt. Roger Towberman, senior enlisted leader of the Space Force, told Military.com that the Space Force recruits will go through Space Force’s first Basic Military Training (BMT) and will be distinguishable from those in the Air Force. “They needed to know they were different; that’s important to us,” Towberman said.

Each Space Force recruit will be given a tablet filled with information about the new service. Their Occupational Camouflage Patter uniforms will also include blue-stitched name tapes specific to Space Force.

“We’ve preloaded those tablets with some learning materials and different things that they can get a head start on — ‘Hey, what is this Space Force thing all about?’” Towberman said.

Space Force’s BMT will be 8.5 weeks long. The majority of the training will be spent alongside Air Force recruits, with just over 20 hours focused on specialized instruction and mentoring.

“There’s several hours where we will cull them from the herd, if you will, and bring them somewhere else and give them a very different experience,” Towberman said, emphasizing that the training approach and specialized content offered will evolve based on feedback from students.

“We don’t have to come up with a final answer that’s going to apply to the full force for what we think is the next 10 years,” Towberman told Air Force Magazine. “We can say, hey, let’s do something that applies to a small group, and try it out and see what it looks like. Then if we like it, we’ll scale it.”

The first recruits are set to graduate basic training in the first week of December. Space Force BMT graduates will receive a Space Force coin instead of the airman’s coin. Graduates will then head to technical training specific to their individual job requirements.

The new graduates will join thousands more troops who have transferred from other services.

“It’s great to see the big smiles, the energy, the cool blue name tapes, the Space Force patches; it’s really exciting to get this physical feedback of what we knew was going on,” Towberman said. “To see them walking around the Pentagon, to see them when we get out and visit folks — it’s just really, really neat to finally be sort of growing our ranks and have a couple thousand people join us.”

Dear Republicans: If you want to win this election, do something about tech censorship

ODD: Facebook Will Pay Users to Deactivate Their Accounts Before November Election in “Study”

Veterans Affairs: Direct deposit, periodic review recommended to get most out of benefits

The Hype House Spark Internet Uproar After Collaborating with 6ix9ine

The Cleveland Brawl: First Presidential Debate Was a Cage Fight