The Finnish eurosceptic MEP launched into a seething attack on Ursula von der Leyen after the Commission President hailed the European Union‘s management of the coronavirus pandemic as a success. Ms von der Leyen urged the EU 27 to come together to form a stronger union as she denounced attempts frome member states to violate the rule of law. But Laura Huhtasaari quickly pointed out the Commission President could not give lessons to the members after the EU broke its own rules in a bid to secure support for its recovery fund.

Ms Huhtasaari said: “Madame von der Leyen is wrong. The EU did not succeed, the EU broke the rules.

“No matter how much von der Leyen is trying to convince us she is better than us EU critics politicians, she broke the no-bailout rule. We didn’t.

“A community that does not follow its own rules has no credibility. The EU is a hypocrite.”

She continued: “What Europe needs now is immediate tariffs on Chinese imports following the example of the United States to save its own industrial production and the European way of life.

JUST IN: EU State of the Union descends into chaos as von der Leyen sparks verbal spat with MEP 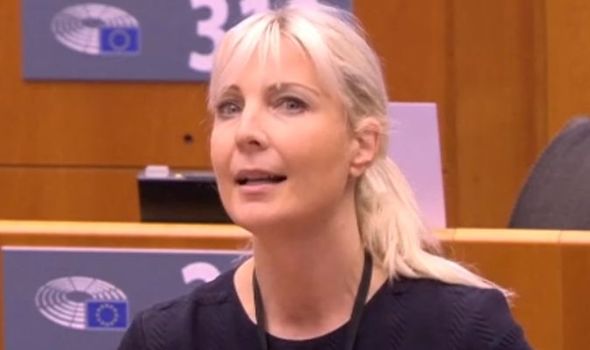 Laura Huhtasaari responded to the State of the Union speech reminding the bloc they broke internal rules (Image: EUROPARL TV)

“We are the ones who want to follow the rule of law and von der Leyen is not. That has to be made clear.”

She said: “You don’t want to pay other country’s debts.

“Right now, the corona package is using Finland’s credit rating and then we pay back the debt together, which is against the treaties, Article 125.”

EU news: Huhtasaari said eurosceptics had not been the one breaching non-bailout rules (Image: EUROPARL TV)

Article 125 of the TFEU, the EU and its member states have no obligation to assume the commitment of either national government or central banks of other member states if they incur in financial trouble.

The article states: “The Union shall not be liable for or assume the commitments of central governments, regional, local or other public authorities, other bodies governed by public law, or public undertakings of any Member State, without prejudice to mutual financial guarantees for the joint execution of a specific project.

However, Ms von der Leyen spoke at length about the importance of the rule of law in her 75-minute long State of the Union speech in Parliament.

“This is why we will ensure that money from our budget and NextGenerationEU is protected against any kind of fraud, corruption and conflict of interest. This is non-negotiable.

“But the last months have also reminded us how fragile it can be. We have a duty to always be vigilant to care and nurture for the rule of law.

“Breaches of the rule of law cannot be tolerated. I will continue to defend it and the integrity of our European institutions.

“Be it about the primacy of European law, the freedom of the press, the independence of the judiciary or the sale of golden passports. European values are not for sale.”

ENOUGH! It's time for law enforcement to begin SHOOTING violent terrorists and rioters who are trying to burn America to the ground

Indonesia passes 100,000 coronavirus cases, the most among Southeast Asia nations

Hannity presses Trump on a potential pardon for Roger Stone