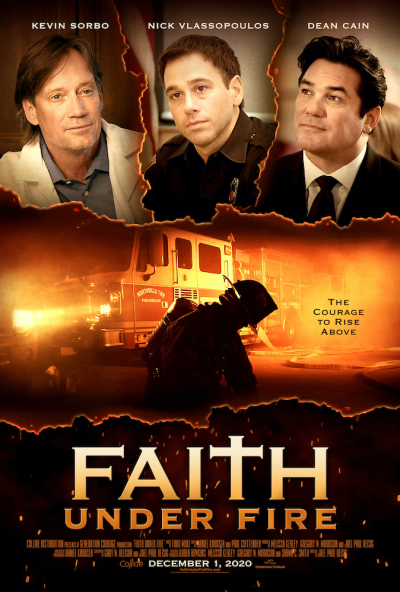 Collide Distribution and Universal Pictures Content Group released the trailer premiere of the upcoming film “Faith Under Fire” exclusively to The Christian Post on Monday. Actor Kevin Sorbo says the inspiring movie has a timely message.

Set to release in select theaters on Dec. 1, “Faith Under Fire” features several popular actors, including Sorbo (“Hercules,” “God’s Not Dead”), Dean Cain (“Lois & Clark”), and Nick Vlassopoulos (“Detroit”). The faith-based film is set to showcase the journey of grief, forgiveness and finding the courage to rise above.

The Joel Paul Reisig-directed film shares the story of fireman Tom Hatcher (Vlassopoulos), “who is at the end of his rope. He saves lives in his job but could not save his wife from cancer, and now his daughter faces the same battle. From an unlikely friend, Tom is challenged to face grief and embrace faith in his darkest hours,” the film synopsis reads.

“With so many people facing unthinkable challenges, we need more stories of hope on the big screen,” Sorbo told The Christian Post. “‘Faith Under Fire’ shows that, even in tragedy, God is with us. That’s a powerful message we all need, now more than ever.”

President of Collide Distribution Bob Elder echoed Sorbo’s sentiment and believes the film could not be premiering at a better time.

“This year has thrust so many people into facing unthinkable challenges, and this film offers a message of rising above our circumstances. We look forward to theaters re-opening so friends, families, and churches can share in this powerful story of hope together,” Elder said in a statement.

“Faith Under Fire” was produced by Generation Courage. Executive Producer Melissa Kerley said the production company was founded to make content such as what will be seen in the upcoming Christian film.

“We founded Generation Courage with the goal of being a ‘light in the darkness’ (John 1:5). Grief is so prevalent in our world now, and many are asking God ‘why me?’ We are confident that ‘Faith Under Fire’ will help bring hope and healing to many who need it.”

Watch the trailer premiere of “Faith Under Fire” below:

Top doctor says 60,000 Black Lives Matters protesters should be ‘quarantined for at least two weeks’ – and ‘really think about what they’ve done’

Say a Prayer for Joe Biden, but Don't Vote for Him

Hand Sanitizer vs. Soap: Which One Should You Use To Stay Safe?

How Feds Decide On Remdesivir Shipments To States Remains Mysterious

Woman Vs. Wild in the Potato Patch (My huge harvest and Embarrassing Moment) | VLOG

Wildfires: Formerly Incarcerated Firefighters In California On What Needs To Change | TIME

Lifting the lockdown; easy does it

Woman tossed out of her jeans after being charged by bison