Do you have your AC on?

Because extreme deadly heatwaves have engulfed parts of the Desert Southwest United States, the Middle East and Europe.

The temperatures were unusually hot in July 2020 across Arizona, New Mexico, and West Texas. 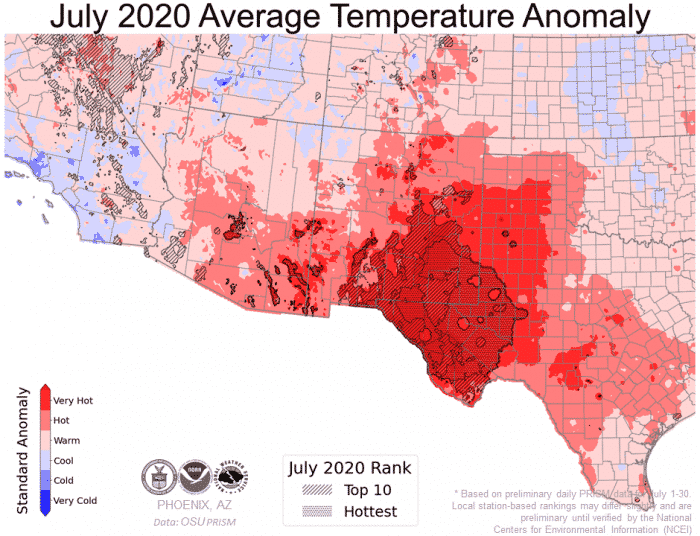 The temperatures were unusually hot in July 2020 across Arizona, New Mexico, and West Texas. Map: Oregon State University
The southwest US is suffering all-time record temperatures. July 2020 was the hottest on record for Phoenix, Arizona, with temperatures up to 118°F (48°C) this week.

As shown in the gray spot on the map above, a killer heatwave has developed across a large part of the southwest United States, including Arizona, inland California (Death Valley), Nevada, and New Mexico in July 2020.

BREAKING Based on preliminary numbers, July 2020 is now the hottest month on record for Phoenix, AZ with an average temperature of 99.0 °F. This breaks the old record of 98.3 °F set in July 2009 and tied in August 2011. #azwx pic.twitter.com/fxMakI2kF5

Again, the Death Valley is making the headlines with this year’s highest temperatures recorded in mid-July at 128°F (53°C).

There is even a picture of Death Valley park rangers near the temperature display in front of the Visitors Centre in Furnace Creek on July 13th showing an amazing 129°F (54°C).

If park rangers at Death Valley can wear a mask, so can everyone else. 😷 pic.twitter.com/sjov3dxIsV

Furnace Creek has set the record for the highest temperature ever measured on Earth at 134°F (56.7°C)… This best mark was measured on July 10, 1913 and has never been broken since… I bet it will be soon.

The Middle East has also recorded excessive heat in the last weeks or so, with temperatures reaching 122°F (50°C) in Iran, Iraq, Kuwait, and Saudi Arabia.

The highest temperature in the last few days was 127°F (53°C) and was recorded in Iraq and Kuwait.

Extreme temperatures recorded in Middle East end of July 2020: 53°C or 127°F in Irak and Kuwait. Ogimet
Weather forecast show that this apocalyptic heatwave will last until August 5, 2020. The highest temperature ever recorded in Kuwait is 129°F (53.9°C).

he apocalyptic heatwave will stay over the Middle East until August 5, 2020. Wxcharts
More extreme temperature and apocalyptic weather news on Strange Sounds and Steve Quayle. Now if you are looking for supplements to increase your healthy lifestyle and sexlife please visit Natural Health Source. [Severe-Weather]

The Rule of 3’s to Survive any Situation

The Virus Is Happy With How We’re Handling Things

Expert: The DCEP to improve competition and diversify options

Judge orders Michael Cohen to be released from prison

Texas to close bars, limit restaurant dining due to explosion of COVID-19 cases

Just How Anomalous Was the Weather in Washington This Weekend? Almost 87,000 Lightnings Struck Washington State on Saturday – It’s Nearly 2/3 the Annual Average!