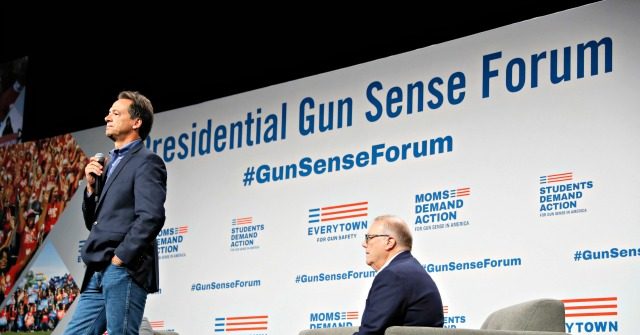 Daines said that there could “not be a clearer contrast” between him and Bullock on the Second Amendment.

“The NRA gave me an A+ rating by them, and of course, I’m endorsed by them. Bullock received an F,” Daines said.

The NRA-ILA noted that Bullock came out in favor of banning “commonly-owned” semi-automatic firearms and magazines that could hold more than ten rounds of ammunition.

“When I view an assault weapons ban, it’s sort of military, semiautomatic, typically removable clips, a magazine of 10 or more — it’s like the AR-15s,” Bullock said in 2018.

The NRA-ILA also wrote that the Montana Hunters & Anglers Leadership Fund, a “fake hunting group” that is funded by a rich San Francisco, California, “megadonor” that is working to obscure Bullock’s “anti-gun record.”

“You got to work hard to get an F rating. Bullock was on CNN with Jake Tapper a year ago and he called for the ban on semi-automatic guns. Now, I think about Montanans their jaws dropped,” Daines said.

Daines said that should Bullock get elected to the Senate, he would serve as just another vote against the Second Amendment.

“He is anti-gun, he’ll be right there in Schumer’s pocket, and that is why you got to stop him and back the United States Senate,” Daines said.

Daines asked rhetorically, “What part of ‘Shall not be infringed’ do the liberals not understand?”

Donald Trump: 'We Win Pennsylvania, We Win the Whole Thing'

‘Where are all of the arrests?’: Trump demands Barr lock up his foes

Trump: Fake News CNN, MSDNC Want to 'Scare the Hell Out of Everyone' with 'COVID'

Netflix’s ‘Cuties’: It’s Not The First Attempt By Hollywood To Normalize Pedophilia

Pence: Voters Know Biden and Harris 'Are Going to Pack the Court'

Nancy Pelosi Snaps at Reporter Who Asks About Hunter Biden: 'I Don’t Have All Day for Questions'

Brennan challenges Republicans to have him testify

The USA on the Brink of Civil War